Sphenoid wing meningiomas are slow growing tumors that originate from outer arachnoid meningeal epithelial cells. They are the most common tumor of the intracranial space to spread to the orbit.[1][2]

Sphenoid wing meningiomas are classified as either globoid tumors with a nodular shape or an en plaque tumor which is flat and spreads along the entire sphenoid ridge[5]. The globoid tumors include 3 groups depending on their location: inner (medial), middle, and lateral (pterional)[5].  Medial sphenoid wing meningiomas have a higher morbidity, mortality, and recurrence rate compared to other meningiomas due to their involvement with anterior visual pathways, anterior intracranial arteries, and the cavernous sinus[5].

Genetically, the most well characterized and common alteration is the loss of the NF2 gene (NF2) on chromosome 22q. NF2 encodes a tumor suppressor known as merlin. Approximately 60% of sporadic meningiomas were found to have mutations in NF2. Meningiomas can also be associated with other genetic syndromes such as Gorlin and Rubinstein-Taybi syndromes, but the association is not as strong as with NF2.[4][6]

Meningiomas can be multiple, particularly when they associated with neurofibromatosis type 2 (NF2). [6]

There is substantial pathologic variation in the appearance of sphenoid wing meningioma specimens. There are many variants encountered including secretory, microcystic, clear cell, lymphoplasmocyte rich, chordoid, atypical, malignant, papillary and anaplastic variants.[7][8] In general, the typical pathologic features that characterize most meningiomas are whorls of meningothelial cells composed of epithelioid type cells with eosinophilic cytoplasm and ovoid nuclei with or without vacuoles or pseudo-inclusions. Meningiomas may contain calcium deposition in the center of the whorls of cells called psammoma bodies. Figures 1 and 2 represent typical examples of histopathologic specimens of meningiomas.[7][8][2]

In a large retrospective study of 1663 patients who underwent surgery for meningioma, 90% were benign WHO grade I tumors while 10% were atypical or anaplastic variants, WHO grade II or III.[9]

The ophthalmic manifestations of sphenoid wing meningiomas vary depending on the location of the primary tumor. The tumor can extend from the intracranial space into the orbit through bone, the superior orbital fissure or the cavernous sinus. They can present with progressive symptoms of an orbital or temporal fossa mass, including temporal fullness, proptosis, globe displacement, ptosis, and impaired extraocular motility. Tumors near the sella or optic nerve can cause visual field defects, optic disc edema or atrophy. Eyelid edema and chemosis are also commonly encountered.[1] Average age of onset is 50 years with a higher incidence in women and Caucasians.[4][6][1][2][10]

Imaging of sphenoid wing meningiomas demonstrates a thick homogenous tumor bed with relative sparing of anatomic structures. The tumors are slow growing and have a tendency to conform around structures and cause compression rather than tissue invasion. The average annual growth rate of meningiomas are 1–3 mm per year.[11] On CT, meningiomas are isoattenuating to slightly hyperattenuating and exhibit homogenous and intense enhancement after injection of iodinated contrast. On MRI imaging, T1- and T2-weighted sequences have variable signal intensity, but they enhance intensely and homogeneously after injection of gadolinium. They also tend to exhibit hyperostosis and calcifications which can be seen on either CT or MRI imaging. Additionally, the presence of a dural extension (also known as a dural tail) is helpful in distinguishing a meningioma from fibrous dysplasia.[4][6][1][2] 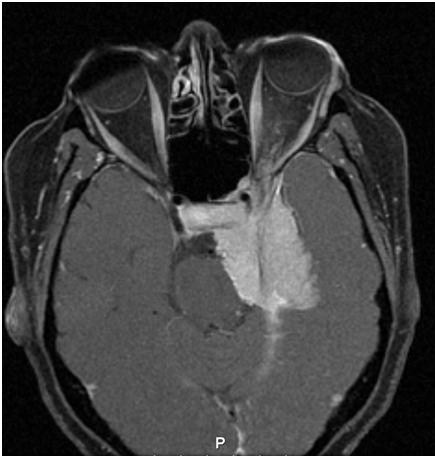 Meningioma resection has long been considered the primary and definitive treatment for meningioma.8[13] The surgery for sphenoid wing meningiomas is difficult because of their complicated intracranial, intraosseous and intraorbital growth patterns that lead them in close proximity to major nerves and arteries[14]. Benefits to this approach include: Immediate removal of the lesion, rapid reduction of an intracranial mass effect, and the possibility to perform a precise pathological diagnosis. Surgery is typically performed using multi- stage procedures leveraging the benefits of different approaches (e.g. endoscopic endonasal surgery for anterior skull base lesions). This technique may minimize the morbidity associated with resection of the entire tumor in one operation.[13][15] [16] [17]Rates of gross total resection are approximately 50%. Surgical complications range from 1-18%.[13][15][16][17] The 5 year recurrence free survival for WHO Grade I meningiomas is 88%.[13][15][16][17] A study of 53 patients with microsurgically treated sphenoid wing meningiomas found that intentional incomplete resection of the tumor had a favorable impact on the postoperative quality of life, primarily due to avoiding neurological defects when the tumor involved neurovascular structures[14]. In these cases of incompletely resected tumors, postoperative radiotherapy or radiotherapy are considered beneficial. Other factors improving postoperative quality of life in patients with sphenoid wing meningiomas treated with microvascular surgery include poor blood supply and lack of tumor adhesion to adjacent structures[14].

Radiation is widely used in the management of sphenoid wing meningiomas. In the past, radiation therapy was reserved for malignant meninigomas or for recurrences.[17][18] Improvement in radiation therapy technology has altered this paradigm. Treatment decisions are individualized and multimodal using both surgery and radiation for patients with symptomatic tumors.[18] The various radiation therapy options for sphenoid wing meningiomas include: stereotactic radiosurgery, fractionated stereotactic radiotherapy (FSRT), intensity modulated radiotherapy (IMRT), and particle radiotherapy (also known as “Proton Beam”). In stereotactic radiosurgery, all of the radiation is pulsed at the tumor in one fraction while in FSRT and IMRT the dose is given in multiple fractions over time. The main difference between FSRT and IMRT is that IMRT can accommodate more complex shapes and larger tumors because it improves the ability of the radiation to conform to the tumor edge and minimize damage to important normal structures.[18] Clinically, radiosurgery is a safe alternative to skull-base meningioma resection in patients who are not good surgical candidates; however, limitations exist for tumors in close proximity to critical and radiosensitive structures. FSRT and IMRT are generally used when the tumor is around radiosensitive structures such as the optic nerve or chiasm.[17][18] For radiation therapy as a whole, local control rates of 92-100% have been reported. Rates of permanent neurological deficits range from 1.6% to 9.8%.[17][18] After radiation therapy, tumor volume decreases by 33% at 2 years and 36% at 3 years.[18]

Chemotherapy has also been used in the treatment of meningiomas that are progressive, recurrent or inoperable. Many agents have been tried including typical cytotoxic agents and mifepristone. In general, chemotherapy does not play a significant role in the management of meningioma as significant systemic toxicity is typically encountered with modest or no tumor regression seen.[11] Combination chemotherapy with hydroxyurea is currently being evaluated. Inhibiting angiogenesis has become one the key mechanisms to treating meningiomas since they are heavily vascular tumors[19]. In vitro studies using targeted molecular therapies against PDGF (Platelet derived growth factor), VEGF (vascular endothelial growth factor), EGF (epidermal growth factor), and MAPK (MAP Kinase) appear promising for recurrent meningioma.[11]

All of the treatment modalities can play a role in the management of sphenoid wing meningioma. In a review article published by Coombs, et al[18], they suggested a relative general standard for treating skull base meningiomas. Figure 6 is a suggested decision tree for the treatment of skull base meningiomas. The flow chart describes consideration of surgery and/or radiotherapy in the presence of symptoms, tissue compression, exophthalmos or cavernous sinus infiltration. In the absence of symptoms or signs, observation may be appropriate.[18]

Overall, malignant potential is low for skull base meningiomas (including sphenoid wing menigomas). In a large retrospective study of 1663 patients who were operated on for menigioma, 90% were benign (WHO Grade I) tumors while only 10% were atypical or anaplastic variants (WHO Grade II or III). The major risk factors for higher WHO grade were non skull base location (OR 1.7), and age >= 65 years (OR 1.5). Male gender also conferred a 2x risk of higher WHO grade.[9] Recurrence free survival in WHO Grade I meningioma with surgery, radiotherapy or combined treatment is nearly 90%.[13][15][16][17][18] Morbidity varies after therapy with the incidence of permanent neurological deficits ranging from 1.6-9.8%.[17][18]Morbidity from the tumor and therapeutic interventions depends on the location of the tumor and its proximity to vital neurological and ocular structures