In metastatic disease, malignant cells can disseminate systemically by one of two pathways: hematogenous or lymphatic. Sentinel Lymph Node (SNLB) Biopsy is a procedure designed to identify potential systemic subclinical or microscopic metastasis from a malignant tumor by identifying their appearance in draining lymph nodes.[1][2][3][4][5][6][7][8][9][10] SNLB has transformed cancer management by allowing providers to detect smaller disease volume compared to traditional modalities such a CT or MRI. SLNB is based on the clinical observation that certain malignancies spread via the lymphatics prior to spreading through the bloodstream. This lymphatic spread often proceeds in a preferential and sequential manner, that is, tumors will metastasize first to a draining lymph node/s within in the region before spreading systemically.[8][9]These draining lymph node/s are referred to as the sentinel lymph nodes (SLNs) and it is important to note that there is often more than one sentinel lymph node.[11] The pattern of this lymphatic drainage from a tumor to regional lymph nodes is often but not always predictable.[6][7]

With the exception of basal cell carcinoma, all malignancies of the ocular adnexa tend to metastasize to regional lymph nodes prior to spreading systemically.[1][4] This is especially important in more aggressive lesions such as merkel cell carcinomas and melanomas where patients may harbor microscopic disease at the time of diagnosis. The reported rate of regional nodal metastasis varies significantly between tumor types and vary even within the same tumor depending on the immune system of the host. The current frequency of regional lymph node metastasis in ocular adnexal tumors are as follows (See Table 1): 15%-41% for conjunctival melanoma, 29% for melanoma of the eyelid, 7% to 20% for sebaceous cell carcinoma, and 1.3% to 24% for squamous cell carcinoma of the eyelid.[3][8][12][13][14][15] For Merkel cell carcinoma of the eyelid, the rate estimated by the largest single study to be 21%, has a reported range of 30-66%.[14]

The detection of a positive sentinel lymph node influences the staging of a patient's disease (based on the American Joint Committee on Cancer tumor, nodes, and metastasis [TMN] staging classification) which directly influences prognosis and potential therapeutic options.[13] In fact, the status of the sentinel lymph node/s has been shown to be the most significant prognostic factor regarding survival and recurrence in patients with cutaneous melanoma.[4] A positive SLNB indicates micrometastatic disease, which may necessitate adjuvant therapy, surgery, and increased frequency of subsequent follow-up evaluations.[16] If the sentinel lymph node(s) are negative, the likelihood of involvement of other nodes or distant metastasis is low. Therefore, sentinel lymph node biopsy can prevent unnecessary complete (radical) lymph node dissections that can carry significant morbidity.

Images depicting both a conjunctival melanoma prior to excisional biopsy (left) and a clinical photograph of Merkel cell carcinoma of the eyelid (right). Both lesions tend to be more aggressive and may harbor micro metastasis at the time of diagnosis. Image left courtesy of Cohen et al and image right courtesy of Author Rona Z Silkiss, MD, FACS.

Lymphatic metastasis has been studied for centuries, dating back to Hippocrates in the 5th century, and later Thomas Bartholin in 1653.[17] The concept of a sentinel lymph node; was first proposed by Gould et al in 1960.[12] [18] Gould and his colleagues observed that patients with parotid tumors seemed to have a single lymph node that served as a “sentinel node” and that this node was reliably the first site of metastatic spread.[12] In the 1970s, Robinson et al introduced the concept of lymphatic mapping through cutaneous lymphoscintigraphy to identify lymphatic drainage pathways and allow for more selective biopsy of a single node or a small number of nodes most likely to contain metastasis. This was critically important because the lymphatic drainage patterns are not always as dependable as anatomically described.[16][19] In the 1990s, Morton et al published a landmark study that proposed the use intraoperative mapping utilizing isosulfan blue dye for cutaneous melanomas. Thus began the modern era of SNLB. The use of radioisotope injections (typically technetium-99m sulfur colloid) for lymphatic mapping further enhanced the ability to detect sentinel nodes.[12] Since then, SNLB has become is standard part in the management of various tumors including breast cancer, melanoma, and other solid neoplasms.

Orbital malignancy in particular has a known predilection for lymphatic spread.[1][2][8][14] The concept of SLNB for patients with conjunctival melanoma was introduced in 2000 by Bita Esmaeli.[1] In 2001, Esmaeli et al reported the first case of SNLB in a patient with conjunctival melanoma and Wilson et al published their data on SLNB in five patients with orbital and ocular adnexal tumors. Since then, there have been numerous studies that have examined the use and outcomes of SLNB for ocular adnexal tumors.[7][8][9][10][12][15][19] There have also been modifications to the traditional lymphatic mapping including use of a smaller volume of Tc 99m (0.2mL) versus 1mL and discontinuing the use of blue dye. [6][7][8][9] 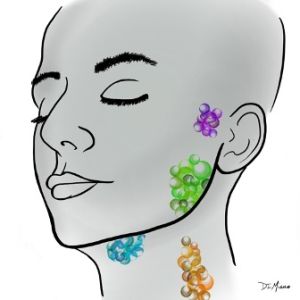 Malignant periocular and periorbital diseases can cause potential spread to the preauricular, submandibular, parotid, or upper cervical lymph nodes; however there can be significant variation in the lymphatic drainage.[6][7][13] Several studies have examined the lymphatic drainage patterns in primate models, human cadaver studies, healthy humans and in patients with conjunctival melanoma. These are summarized below:

Given the known variation in drainage patterns, careful clinical evaluation of the preauricular, parotid, submandibular, and cervical nodes is suggested when assessing patients for ophthalmological malignancy.

Before SLNB, patients should have negative imaging findings via modalities such as ultrasound and CT.   Patients with imaging suspicious for a disseminated disease are not considered for SLNB as disease spread is already confirmed with less invasive techniques.

Factors that may influence the SLNB results include malignancy type, location, metastatic potential, and disease morphology (See Table 1). Generally accepted criteria are as follows: conjunctival/eyelid melanomas ≥1mm in histologic thickness and/or those with histologic ulceration; cutaneous melanomas at least 1mm thick or <1mm thick but with evidence of histologic ulceration those with >1 mitotic figure per mm2 or Clark level IV (in the case of eyelid skin melanomas); sebaceous cell carcinomas ≥10 mm in width or lesions at stage T2b or higher; squamous cell carcinomas wider than 2cm, locally recurrent or those that have perineural invasion; and merkel cell carcinomas of any size.[13][14][21]

Prior to the SLNB, a preoperative lymphoscintigraphy can be performed. Fast-uptake radioactive tracer, most commonly technetium 99 sulfur colloid (Tc-99m), is injected at the primary tumor bed; intradermally for eyelid lesions, and subconjunctivally for conjunctival lesions.15  Due to these tissues' proximity to the globe, an ophthalmologist trained in radiotracer handling is recommended to conduct the injection, as opposed to a nuclear medicine technician who traditionally administers radiotracer for distal anatomical assessments.[22]  Next, lymphoscintigraphy is commonly used to map the radiotracer as it disperses lymphatically. Serial radiographic images are taken via a gamma camera every 15 minutes then every 30 minutes thereafter to follow the drainage of the tracer. As in other radiological studies, a specialist in nuclear medicine must review the results and confirm metastatic regions before SLNB.

Once the affected lymph nodes are identified, the lymph node biopsy can be appropriately planned.  Typically, SLNB occurs intraoperatively at the time of primary lesion resection, however, this technique may depend on the localization of SLNs and the need for a multidisciplinary approach. Sentinel lymph node biopsy may also be performed separately following primary tumor removal to allow fo histopathological examination to occur and for more careful patient selection.[14] As in the preoperative mapping stage, 0.3 to 0.4 mCi of filtered technetium (Tc)-99 sulfur colloid in 0.2 mL normal saline is injected in 3 to 4 spots around the lesion approximately 1.5 hours prior to surgery.[8][9] After adequate time is allotted for Tc-99m accumulation in sentinel regions, a handheld transcutaneous gamma probe is used to re-identify nodes of interest intraoperatively.[2]  The sentinel lymph is identified as the lymph node/s that have radioactivity counts at least twice as high as the level of background radioactivity. The node/s are then excised and sent for histological review. The lymph node basin surrounding the sentinel lymph nodes are scanned again to look for any additional nodes with high radioactive uptake and subsequently removed. This process continues until little, or no radioactivity is detectable within the draining lymph node basin.

During histological review, SLNs are typically sectioned using the "bread loaf" approach in 1-2mm sections. Hematoxylin and Eosin (H&E) staining is performed to evaluate for malignant cells. Additionally, various immunohistochemical markers (see Table 1) can also be performed to aid in diagnosis. If malignant cells are detected, more extensive lymph node dissection is performed, and patients can be considered for further adjuvant therapy.[14]

Studies have also examined the utilization of single photon emission computed tomography/computed tomography to help more precisely localize the SLN.[9][14][18][23][24]Initially, studies utilized a dual-dye technique in which a small amount of isosulfan blue dye (0.2 cm3) to aid in visualization was injected; however, this has become a less commonly utilized practice given the concern of staining the conjunctival surface.[8][15]The use of indocyanine green-guided sentinel lymph node biopsy as an alternative to technetium-99m has been examined in a small number of studies; however, Tc-99m remains standard practice.[25]

The most common complication is a false negative result. Overall, the rate is decreasing and is inversely correlated with the experience of the surgeon performing the procedure. In fact, one institution reports a zero false negative rate over the last 15 years.[27] Though rare, SLNB may be contraindicated in patients with radiotracer allergies.[28] There has also been concern regarding radiation exposure from the technetium; however, a dose of 0.3mCi of technetium-labeled sulfur colloid emits an estimated dose of 0.2 rad (0.002 Gray) during a 6-hour period (assuming successful drainage of the sulfur colloid). This dose is far less than the dose needed to cause cataract formation or radiation retinopathy.[6][14]Another potential complication is blue staining of the ocular adnexal structures. In the initial technique described by Morton et al, blue dye was used to help isolate the SLNs. For the first sixteen patients undergoing SLNB in one study, patients did experience transient staining, though, this dissipated by 24 hours.[8] This has been described in other studies as well.[15] Lastly, rarely, iatrogenic injury to neurovascular complexes can occur with nodal dissection.[8][21] The head and neck areas are highly vascularized regions with multiple neurovascular complexes. Injury to the branches of the facial nerve (CN VII) and trigeminal nerve (CN V) can occur with dissection of the preauricular and parotid areas –a careful dissection may minimize these risks. 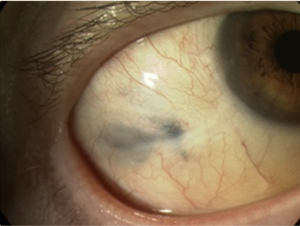 The use of SLNB in ocular adnexal tumors has been demonstrated to be a safe and effective way to detect micro metastasis and subclinical disease. Detection of a positive sentinel lymph node has vital prognostic significance. As more data is acquired, and biopsies performed, providers will better understand which patients are better candidates for SNLB and limit the number of false negative results.