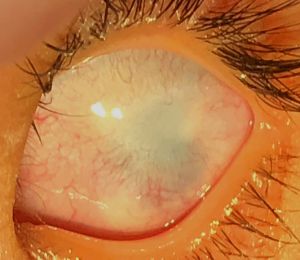 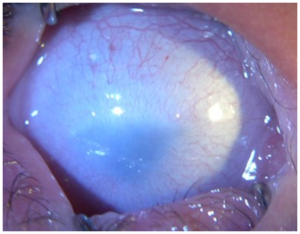 Sclerocornea is a rare, non-progressive, bilateral, and asymmetric primary congenital disease which has no association with inflammatory and/or infectious causes. It is defined as diffuse (total) or peripheral opacity of the cornea, either associated or not with flat cornea and systemic changes (mental retardation, deafness, and craniofacial abnormalities). There is no sex predilection. [1-10] The opacity of the cornea is similar to the sclera, white and vascularized, with no delimitation of the limbus, making it difficult to assess the corneal diameter correctly in cases of peripheral involvement, the central region shows up with variable transparency. [1, 2, 11-13]

The anterior segment has in its embryogenesis from three initial and important processes: 1) Formation from the neuroectoderm of the forebrain; 2) Invagination and separation of the lens vesicle from the surface ectoderm; 3) The anterior migration of mesenchymal progenitor cells from the neural crest. Sclerocornea is caused by a change in the migration of neural crest cells. There is no formation of the “limbal anlage” during the 7th and 10th week of gestation, a structure responsible for limbic differentiation and corneal curvature. With its absence, the normal interface between sclera and cornea is disrupted and the normal corneal curvature is flattened. [2, 15]

Fifty percent of sclerocornea cases are autosomal dominant or recessive, while the others are sporadic in appearance.[16] Some genetic mutations have been associated with the development of sclerocornea and its various phenotypes. The flat cornea can be subdivided into two clinically distinct genetic forms: CNA1 – flat cornea 1 (OMIM no 121400) and CNA2 – flat cornea 2 (OMIM no 217300). CNA1 is of autosomal dominant inheritance, located on chromosome 12q; however, the gene is not identified. CNA2 is autosomal recessive, in the KERA gene, located on chromosome and locus 12q22-q23, in which there is an error in the decoding of the keratan sulfate proteoglycan –keratocan – important for corneal transparency. In the autosomal recessive form, CNA2, there is a greater corneal flattening, a high degree of hyperopia, and a greater number of congenital malformations of the anterior segment, when compared to the other phenotypes. Genetic mutations associated with the PAX6, FOXC1, and PITX2 genes sometimes occur with iridocorneal adhesions, corectopia, and iris atrophy. [1, 3, 12, 17, 18]

The human corneas were excised from patients with total sclerocornea and were analyzed according to immunohistochemistry using antibody markers of corneal epithelium (keratin 3 and 12) and conjunctiva (keratin 13). The epithelium found in the samples (4 grafts) was from cornea, although one sample was positive for conjunctival and corneal epithelium. No goblet cells were found in the specimens.[19] The Bowman's layer may be absent and/or associated with irregular patches of hyaline material. [19] The collagen fibers have differences from the normal cornea. There is disorganization of their layers with irregular arrangement of the fibers. In addition, there is variable diameter of the collagen fibers, which get thinner diameters as they reach the posterior stroma, as is typical of sclera.[2, 7, 8, 13, 20]. Yang et al. found glycosaminoglycans such as sulfated keratan sulfate in the stromal extracellular matrix in sclerocornea, suggesting that collagen fibers originate from the cornea and not from the sclera as previously reported. Another study demonstrated the presence of type I collagen in the sclerocornea, similar to that of the cornea, and not type III collagen, the most abundant in the sclera.[19, 21]. In sclerocornea, vascularization occurs in the entire thickness of the cornea, originating from the episcleral and conjunctiva, mainly in the anterior and middle stroma. Keratocytes and mast cells are present in the anterior stroma. [5, 8, 11, 12]. The absence of Descemet has been reported or a decrease in thickness – between 0.8 and 1.5 m – presenting homogeneous substance and proliferation of fibroblasts [16, 19, 22]. David Hui-Kand Ma et al found no endothelium in 4 samples of human corneas excised from patients with sclerocornea. [19]

The main finding is the presence of corneal opacity, usually bilateral, asymmetric, which may be partial or total. Sclerotization occurs from the periphery to the center and in cases of total sclerocornea the opacity affects the cornea diffusely with the center being less dense. The central region may be transparent in the partial cases allowing visual development. It is not possible to delimit the limbo. And there is a reduction in corneal curvature and there may be a dioptric power between 25 and 42D causing high hyperopia.[3] Other ophthalmologic findings may be associated with sclerocornea. (Table 1). [7] 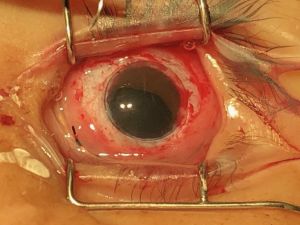 In sclerocornea associated with developmental glaucoma, an autosomal recessive mutation may be present. There is a decrease in corneal curvature and in the anterior chamber, increasing the risk of secondary glaucoma, which presents from the 2nd decade of life onwards.[16, 23, 24] The diagnosis and treatment of this anomaly must be early because of the risk of profound amblyopia. Systemics abnormalities may be associated with sclerocornea must be investigated as soon as possible so the patient is able to have the proper treatment.

The diagnosis of congenital corneal anomalies can be made through biomicroscopic examination and the support of complementary tests, especially anterior segment optical coherence tomography (OCT-AS) and ultrasound biomicroscope (UBM). These exams are important to the differential diagnosis of congenital opacities and the evaluation of concomitant alterations in the anterior segment and to preoperative planning of these patients. The OCT-SA allows the assessment of newborns, without the need of anesthetic, besides that not being an invasive and fast exam. [25, 26] The UBM allows a better detailing of the different structures of the anterior segment up to a depth of 5 mm. The changes identified on examination are compatible with the histopathological findings described, such as the presence of a flattened and thick cornea in its periphery, diffuse sclerotization indicated by hyper-reflexivity. [22, 27-29] 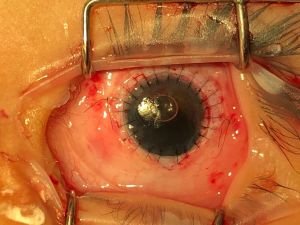 Patients with sclerocornea or any congenital opacity must be submitted to ophthalmological assessment and complementary exams to exclude other associated eye diseases such as glaucoma. It is necessary to carry out a systemic and genetic assessment in search of associated diseases, in addition to genetic counseling. On the whole, the treatment of congenital corneal opacities that affect the visual axis is surgical, with the penetrating keratoplasty being used as the method of choice. Besides that, in order to avoid de development of deprivation amblyopia the surgery must be performed as early as possible.[30] It is known that the visual prognosis in patients diagnosed with sclerocornea is poor and there is high rates of graft rejection in the 5-year follow-up [31]. Kim et al showed failure in 75% of the cases of PK (penetrating keratoplasty) in patients with sclerocornea. The factor associated with graft failure was vascularization in the limbal region or in the periphery of the cornea. Other factors such as secondary glaucoma and presence of iridocorneal adhesions were not identified as risk factors. [32] In the largest series of patients with total (15 eyes) and partial (12 eyes) sclerocornea clinically diagnosed and undergoing penetrating keratoplasty, Frueh and Brown found 70% graft survival in the 1-year follow-up. [33] In the series by Michaeli et al, six children with sclerocornea and 12 operated eyes, only 37% of the grafts remained clear in the 1-year follow-up.[34] The poor prognosis of corneal transplantation in sclerocornea is related to corneal vascularization, associated ocular changes, mainly glaucoma, and the need for concomitant surgeries such as lensectomy and vitrectomy, among others. In patients with partial sclerocornea and free visual axis, optical correction, with glasses, should be performed early in order to avoid amblyopia due to high hyperopia.