A relative afferent pupillary defect (RAPD) is a critically important ophthalmological examination finding that defines a defect (lesion) in the pupil pathway on the afferent side. An RAPD is relative to the fellow eye and occurs because of the bilateral and equal innervation of the pupils in normal individuals. The RAPD manifests as a difference in pupillary light reaction between the two eyes. The test requires two eyes but only one working pupil.

An RAPD is seen in unilateral or bilateral but asymmetric lesions of the prechiasmal optic nerve (and retina) but can occur anywhere in the afferent pupillary pathway including the optic tract and the pretectal afferent fibers in the dorsal midbrain[1][2].

Conditions Leading to a RAPD

Lesions of the Anterior Optic Pathway

Lesions of the Retina/Posterior Segment

Reverse RAPD and its usage

Testing for a RAPD requires two eyes, but only one functioning pupil. Where one eye has an efferent pupillary defect (e.g., iris posterior synechiae, trauma, third nerve palsy, or pharmacological mydriasis), a ‘reverse RAPD’ test can be employed[2][3].Reverse RAPD, or reverse testing for RAPD, utilizes the swinging flashlight test while evaluating the normal, unaffected pupil for dilation. This finding is present in every RAPD but most examiners are used to only observing the affected pupil during the swinging flashlight test. In fact however BOTH pupils dilate in every RAPD but in the reverse RAPD the clinician will be observing the dilation of the unaffected rather than the affected pupil (in the setting of a patient with both an afferent and efferent pupillary defect). 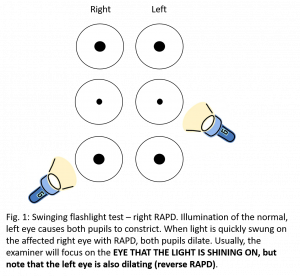 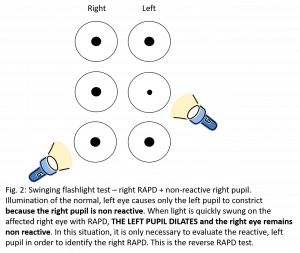 A reverse RAPD should be evaluated in every patient with an efferent pupillary defect. For example, in a patient with a cranial nerve (CN) III palsy with a dilated pupil, one of the main diagnostic considerations is possible aneurysm of the posterior communicating artery (PComm). In this setting, a CN III palsy is potentially life threatening and urgent vascular imaging (e.g., computed tomography (CT) and CT angiogram of the brain) may be necessary. However, if this same patient with a CN III palsy also has an RAPD (by reverse testing) then the localization of the lesion moves from the posterior communicating artery to the orbital apex. Some clinicians may neglect to check for a RAPD by reverse testing because they are misled by to believe that the fixed and dilated pupil precludes assessment of that pupil’s afferent response[5].

Figure 2 shows the swinging flashlight test in a patient with a right RAPD and a non reactive right pupil. In this instance, the left pupil should be watched the whole time the examination is conducted to identify if there is an RAPD.