Retinal Pigment Epithelial (RPE) Tears, also known as RPE tears or rips, is a phenomenon first described in 1981 [1] in which the RPE acutely tears from itself and retracts in an area of retina usually overlying a pigment epithelial detachment (PED) at the junction of detached RPE and flat RPE, leaving the underlying Bruch's membrane and choroid exposed.

RPE tears are serious vision limiting events for most patients, and classically happens in patients with neovascular age-related macular degeneration (AMD) as a part of the natural history of PEDs or in response to laser or Anti-VEGF treatment of choroidal neovascularization. The reports of RPE tears have been increasing exponentially since the widespread use of Anti-VEGF drugs for wet AMD.

RPE tears are one of the most feared complications of anti-VEGF injections behind endophthalmitis, and can cause devastating loss of visual acuity.

RPE tears were first described in 44 eyes by Hoskin et. al in 1981[1], noting that this uncommon spontaneous event happened in their AMD patients with pigment epithelial detachments (PEDs). Since then, although the overwhelming majority if cases is in patients with neovascular AMD, it has been reported that RPE tears can happen in the setting of many different chorioretinopathies such central serous chorioretinopathy (CSCR), polypoidal choroidal vasculopathy (PCV), traumatic chorioretinopathy, pathologic myopia, choroidal tumors, presumed ocular histoplasmosis, (POHS), angiod streaks, proliferative vitreoretinopathy (PVR), choroidal edema and detachments from hypotony following glaucoma surgery, and also following photodynamic therapy (PDT) and Anti-VEGF treatments [2][3].

The incidence of RPE tears is relatively rare, and has mostly been studies in patients with neovascular AMD. The literature has consistently showed that the incidence is higher in patients after anti-VEGF injections (14-19.7%) than observed in natural history studies (10-12.5%)[4], suggesting an enhancing effect of anti-VEGF drugs on RPE tear formation.

It is important to emphasize the fact the RPE tears do occur spontaneously and as a part of the natural history of PEDs and were described in this way for many decades, and are not always the result of anti-VEGF treatment. Because of the widespread usage of anti-VEGF injections for AMD, it is now more commonly recognized in this setting, and research has focused on identifying risk factors for RPE tears and treatment.

The common factor in most of the reported associations with RPE tears is the presence of a PED, with neovascular AMD being by far the most common etiology in which RPE tears are seen.

PEDs are where the RPE is detached from the underlying Bruch's membrane, with the space created and/or occupied by serous fluid, blood, fibrovascular membranes, drusenoid material, or a combination.

Bird proposed that RPE tears are a result of hydrostatic pressure from fluid or material accumulating in the sub-RPE space (in the PED) and eventually cause rupture of RPE [5]. Perhaps a more studied theory of how RPE tears form is that there is contraction of type 1 neovascular membranes in the sub-RPE, with some OCT studies showing a neovascular or polyp complex attached to the inner leaflet of the PED [6][7].

Once torn, the RPE tends to "scroll" away onto itself, leaving an area of bare retina with no underlying RPE, and with either a cleft of fluid between the Bruch's membrane and neurosensory retina or with Bruch's directly apposed to the retina.

Visual acuity is typically decreased dramatically and acutely, though some cases of small tears and even large ones can maintain good visual acuity, though this usually decreases overtime as well. There are reports that some cases have seen RPE cell migration to cover previously bare areas, though usually only in small tears. Most cases of large RPE tears that are not continued to be treated with anti-VEGF will eventually develop a fibrous subretinal plaque and scarring, with or without continued subretinal fluid.

Risk factors for RPE tears have been established in patients with AMD receiving anti-VEGF medications, and include larger lesion linear diameter, vertical PED dimension, and duration of PED formation.

Sarraf et al. showed that PEDs with a baseline vertical height >550 microns were associated with a higher risk of RPE tear[8]. Chan and others have determined a cut off of for increased RPE tear risk around heights of 400 microns [9]. Chiang showed that PEDs with a increased surface area and larger linear diameter carried a higher RPE tear risk [10].

Sarraf developed a grading system for RPE tears, and in that study determined that vascularized PEDs may show an angiographic "ring sign" with hyperfluorescense at the lesions edge which in some cases may indicate the cleavage plane or "micro rips" for the development of a higher grade more clinically significant RPE tear after anti-VEGF therapy [11].

Doguizi and Ozdek showed an inverse relationship between the duration of PED and RPE tear formation, finding PED had been present for a distinctly shorter period in the RPE tear patient group [12]. They stated that a shorter duration of PED means that the neovascular process is new, with immature vessels. and are thus more susceptible to a robust reaction to Anti-VEGF.

RPE tears are a part of some disease processes natural history, and thus cannot be prevented in some cases. As mentioned above, patients with neovascular AMD and larger PED may be at higher risk for RPE tears, and thus counseling of this adverse event should be done in patients at risk, informing them that the it is possible to have sudden and severe vision loss after an injection. Some authors have even suggested that if high risk factors are seen, as discussed below, that anti-VEGF therapy can be discontinued for a period with regular follow up until the risk factors decline.

At current time, there is no definitive evidence that one anti-VEGF is safer than others. Some authors have proposed that half dose therapies or using intravitreal triamcinolone soley or prior to anti-VEGF may reduce the risk of RPE tears in high risk patients.

The diagnosis of RPE tears is clinical, and can be assisted by different imaging modalities, with optical coherence tomography (OCT) imaging being one of the best ways to confirm an RPE tear. 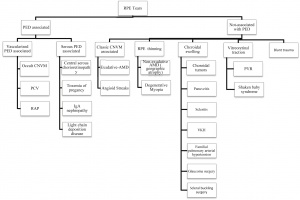 Dilated fundus examination can reveal an area of retracted and redudant RPE that can be seen as a well defined hyperpigmented line, and the area left behind by the tear will appear as a well circumscribed area of depigmented fundus with bare choroid underlying retina. Areas of retinal or subretinal hemorrhages can be seen as well.

The most classic shape of an RPE tear is a crescent shaped tear, though more rare forms including concentric tears where an island of scrolled RPE at the center of the tears exists.

Symptoms can vary depending on the size of the RPE tear and location. A common presenting symptom of RPE tear is sudden and severe central vision loss. Other symptoms can include increased metamorphopsia, scotomas, photopsias.

Optical Coherence Tomography (OCT) - In a classical RPE tear from a neovascular PED, the hallmark on OCT will be a discontinuity of the hyperreflective RPE band, with a free edge of RPE usually wavy and scrolled up overlying the PED, contracted back towards the CNVM. The area where the RPE is missing will demonstrate marked a window defect where there is increased depth signal. Sometimes the neurosensory retina can be attached directly to the choroid, other cases can show a exudative process between the neurosensory retina and choroid. 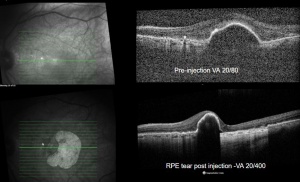 Top image shows a likely fibrovascular PED. Bottom image is after anti-VEGF injection and shows the discontinuity in the RPE with RPE absent corresponding to the lighter area/RPE tear in the en-face image. Images courtesy of Jesse Smith M.D.

Fluorescein Angiogram (FA)-Marked hyperfluorescence will be seen at the site of the RPE rip where retina overlies bare choroid. Blockage or hypo-florescence can be seen in the adjacent area where the RPE is scrolled.

Fundus Autofluorescence (FAF) - Areas of RPE tears exhibit marked hypoautofluorescence, since the RPE accounts for the signal in FAF. The area of "scrolled" or bunched up RPE adjacent to the tear area can demonstrate hyperautofluorescence.

Querques et al. 2016 described a previously unreported finding they termed Retinal Pigment Epithelium Aperture, in which are similar to RPE tears in that the RPE is absent in a circumscribed area overlying a PED, but in this case without a tearing, rippling, or retraction that is typical of tears[13]. The theorize that this may represent a natural evolution of avascular PEDs, characterized by RPE atrophy.

Other things that should be considered in the differential of RPE tears include anything that can cause RPE atrophy, most commonly geographic atrophy in the setting of AMD, in which RPE atrophy can be seen. This can be distinguished from RPE tears by a lack of scrolled RPE and an insidious onset as opposed to a sudden onset.

Patients who have an RPE tear must continue to have close follow up and anti-VEGF treatment in select cases.

Many authors have found the continued anti-VEGF treatment of neovascular AMD with an RPE be beneficial [14], though this may not be as true for larger lesions and ones involving the fovea [11]. When considering the likely mechanism of classical RPE tear formation in neovascular AMD, the underlying disease should continue to be treated, and at the time of this writing, there have been no studies showing worsening of already occurred RPE tears with continued anti-VEGF

Lesion size and involvement of the fovea are the most important prognostic factors in determining visual acuity outcomes. Sarraf and colleagues created a grading system for RPE tears based on size and location and commented on prognostic value for this grading[11]. In general, small RPE tears can have minimal or no visual acuity loss, and as the size increases or the fovea is involved, vision can be devastated.

Grade 4 - >1DD and involving the fovea

Lower grade tears showed better visual acuity and response to continued anti-VEGF therapy, while grade 4 tears tended to have a poor visual prognosis with or without anti-VEGF therapy. It's important to note that 2 of the eyes in the grade 4 category in their initial study did have improvement of subretinal fluid (SRF) with anti-VEGF treatment, whereas untreated grade 4 eyes either progressed to disciform scarring or had persistent SRF. In their study, eyes with grade 4 tears had visual acuity ranging from 20/63 to HM, with most worse than 20/200.