RPC was first discovered by Jones et al. 2000 in a case series describing six patients who had similar symptoms to SC and APMPPE with a variation in the progression of retinal lesions, their location and number [1]. APMPPE, SC, and RPC can all be considered as part of the white dot syndromes, a group of inflammatory choroidopathies that present with multifocal, white lesions in the retina on fundoscopic exam [2]. The diagnosis of RPC is often missed due to incomplete knowledge about the disease and its differences in presentation compared to other white dot syndrome pathologies. RPC has an atypical, chronic clinical course with widespread peripheral lesions that persist for more than 6 months.

RPC affects males and females equally, commonly presenting between the second and sixth decades of life [3]. Current research has not pointed toward a definitive etiology; however, there may be a potential viral, bacterial, or autoimmune cause as is thought with APMPPE and serpiginous choroiditis [4][5][6]. Cases have been described that suggest a possible association with thyroiditis [7]. No systemic disease has been consistently associated with RPC [1].

Diagnosis is typically made through clinical evaluation of symptoms complemented by multimodal imaging and exclusion of other common causes of chorioretinitis. The “relentless” course beyond 6 months should raise suspicion for RPC over other diagnoses.

Patients may complain of rapid onset painless blurred vision as well as paracentral scotomas, photopsias, metamorphopsia, and floaters [1][7][8]. A viral prodrome may be absent [8].

Fundoscopic exam is significant for acute lesions appearing as creamy and white in the retinal pigment epithelium (RPE); the lesions are typically smaller compared to other white dot syndromes at approximately half disc area in size [7][9]. Numerous (50+) lesions of varying stages (i.e. acute, chronic) might be seen in the posterior pole and in the periphery. Lesions may increase in size and chorioretinal scarring is present as lesions heal [10]. Vitreous and anterior chamber cells as well as papillitis can also be seen [3].

OCT can show occasional subfoveal fluid and pigment epithelial detachment (PED) of the macular region. Some authors have reported hyperreflectivity of both the inner and outer layers of the retina [9][12]. OCT Angiography (OCTA) can show multifocal areas of inner choroidal ischemia. 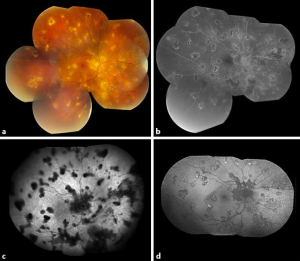 FAF is an irreplaceable test for diagnosing and following RPC over time and can be a great tool to help differentiate RPC from other White Dot Syndrome pathologies. Yeh et al. examined a patient with RPC with clinically similar characteristics to APMPPE but markedly different FAF imaging findings. The patient with RPC showed widespread hypoautofluorescence in the posterior pole and mid-peripheral retina [14]. Acute lesions on FAF are hyperfluorescent while old lesions are hypofluorescent, making it a useful tool in following the progression of disease.

ICG can be used in conjunction with FAF for the diagnosis and for following the course of disease activity. Imaging reveals presence of multiple placoid lesions with hypofluoresence of active or healed lesions and hyperfluoresence of intermediate and late lesions [9][10].

Treatment involves systemic corticosteroids with addition of immunomodulatory therapy if warranted. Combination treatment of cyclosporine and prednisolone have been used to reduce the recurrence of lesions; however, treatment with these agents has been repeatedly shown to be refractory in several case reports [15]. Macular edema can be treated with an intravitreal injection with triamcinolone acetonide as well as a potential alternative to systemic corticosteroids [16]. Immunosuppressive agents such as azathioprine, cyclosporine, and adalimumab have also been described for use in addition to corticosteroids [8][9][17]. Biologics , such as adalimumab, infliximab, and mycophenolate mofetil, are currently being studied for their use in reducing the amount needed of other immunosuppressant agents when used in conjunction [15][17].

Due to the chronic nature of this disease, patients must be advised to regularly follow-up with a retina specialist and/or uveitis specialist to monitor the progression of the affected and/or fellow eye, recurrence of lesions, and the efficacy of treatment [7].

Visual acuity prognosis tends to be relatively good despite retinal manifestations; however, discontinuation or absence of mentioned therapies may lead to visual decline over time. Complications may include retinal scarring, subretinal fluid accumulation and fibrosis, choroidal neovascularization, and epiretinal membrane formation.

Relapsing lesions are the predominant feature of RPC. The visual outcomes varies among the series and cases reports. Despite the chronic nature of this disease, the long-term visual prognosis is generally good and permanent vision loss is mild with timely steroid and immunosuppressant use [1][8]. Central vision may be affected in untreated cases [7][8].