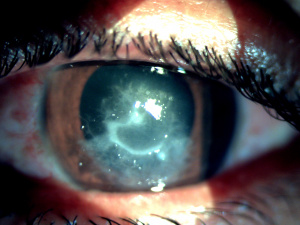 Keratitis caused by fungus-like aquatic oomycete Pythium insidiosum. Pythium keratitis is a relatively rare form of keratitis but its potential to cause blinding manifestations in the eye, makes it an important cause. It is most frequently misdiagnosed as fungal keratitis. It belongs to the Phylum Straminipila, Class Oomycetes, Order Pythiales, and Family Pythiaceae. [1]

Pythium is found in tropical, subtropical, and temperate climates. The majority of the early reports were from Thailand and Israel. The first case of ocular pythiosis was reported in 1988 and since then numerous cases have been reported from all over the world.[2] Despite the omnipresence of this organism, ocular pythiosis cases have been underdiagnosed and less frequently reported. Apart from ocular disease, subcutaneous, vascular, and systemic pythiosis have been documented in literature.[3][4][5] Many studies on Pythium keratitis from southern India have been documented. Two forms of the organism are known: the hyphate form with right-angle branching and broad filaments, and the infective form biflagellate zoospore in aquatic environments.

Early reports of pythiosis from veterinary doctors catering to horses led to a hypothesis of the infection in those who were in the vicinity of horses.[6] However, later the association was not found to be too strong. Reports from Thailand highlighted the outbreak of Pythium keratitis in the rainy season and hence link of exposure to aquatic environments was found.[7] An exposure to agricultural aquatic surroundings may be associated however many studies have shown a large number of patients with non-agricultural history. Often there might just be a history of exposure to dust particles or foreign body falling in the eye.

Exposure to aquatic environments, agricultural areas, soil, and dust are possible risk factors in the development of Pythium keratitis. Working in close proximity to horses is also attributed by some. Cases related to contact lens use have also been reported. [8]

A study by Mendoza et al explained the life cycle of pythium using an in vitro model.[9] They isolated strains of pythium using equine cases of pythiosis. This was followed by demonstration of asexual reproduction of pythium on plant tissue using an induction medium containing potassium biphosphate and chloride salts of magnesium and calcium. Biflagellate zoospores hence produced were examined under light microscopy for motility. Chemotactic behavior of these spores was assessed towards bits of grass, lily leaves, hair, and biopsied horse hide. Zoospores got attracted to all these tissues and encysted on them followed by production of germ tubes. These germ tubes later developed into mycelium and went on to produce sporangia containing biflagellate zoospores. This study highlighted that P. insidiosum requires aquatic plants to complete its life cycle and hence aquatic and humid habitats may support its propagation.

One of the major reasons, pythium is misdiagnosed as fungi is that it resembles the hyphate organism in light microscopy. Classically described to be seen as broad, branching, aseptate to sparsely septate organism. However, pythium lacks ergosterol and on the contrary, contains cellulose and β-glucan in its cell wall. Histopathological findings from corneal tissue infected with pythium reveals diffuse destruction of corneal stroma. The inflamed tissue consisted of polymorphs mixed with eosinophils, plasma cells, and debris. Few histiocytes and multinucleated giant cells can be present in the posterior stromal exudates and along the descemet's membrane. Granulomatous inflammation can be noted in 15% of the cases. [10] Also interesting to note is that although pythium is known to cause vascular disease, it spares the vessels of the eye.

Diagnosis of Pythium keratitis is often delayed due to its rarity. Therefore it becomes very important to know when clinical suspicion exists. Routine corneal scraping should be done with a sterile instrument (blade, kimura’s spatula, or 26G needle) under topical anesthesia at the slit lamp. The microbiologist should be specifically informed to look for Pythium otherwise it can go undetected. Pythium can be grown on potato dextrose agar, Sabouraud dextrose agar, and chocolate agar. Other modalities like PCR and confocal microscopy have also been successful in diagnosis.

Several reports have highlighted that pythium keratitis is more commonly seen in non-agricultural workers as opposed to fungal keratitis. Mostly a vague history of exposure to some dust or an insignificant foreign body may be present. Nevertheless, some patients of Pythium keratitis might give a history of exposure to aquatic environments like agricultural water pools or rainwater. Some reports also suggest the precedence of vegetative trauma or rarely trauma with a horsetail. Occupational history of working in animal homes specially stables should be asked for.

Usually, patients present with an acute red eye with the presence of a white spot on the cornea. Severe photophobia and foreign body sensation may accompany. Pain in the affected eye is commonly found in varied intensity depending on the extent of involvement. Time taken from the onset of symptoms to hospital presentation may vary from 2 to almost as long as 60 days. [11]

Vision may range from 6/6 to as poor as light perception depending on the severity of keratitis. The ulcer classically appears as having a dense gray-white necrotic surface with feathery margins and flocculent debris overlying. Multiple mid stromal “tentacle-like infiltrates' ' and “subepithelial expanding dot-like infiltrates' ' have been described. [11][12] The other classical features include stromal infiltrate with hyphated edges and peripheral furrowing.[13] The exact pathogenesis behind these pinhead lesions is unclear but they are claimed to be due to the organism itself rather than stromal inflammatory response and expand in a reticular pattern. Radial keratoneuritis can be present. Some patients might have peripheral furrow-like lesions. Associated stromal edema and Descemet's folds may be present. Hypopyon and endothelial plaques may accompany severe ulcers. Advanced cases may have corneal melts and perforation. The typical course of Pythium keratitis is prolonged marred by it's not so easily scarring quality. Aggressive progression may lead to scleral and limbal involvement too. Ocular involvement apart from keratitis can be in the form of a rapidly progressive periorbital or orbital cellulitis reported in children.

Corneal scraping as done routinely for all corneal ulcers should be done. The presence of relatively broader hyphae with sparse or no septations and right-angled branching is seen on gram staining and KOH mount. This often misleads the examiner in favor of fungal etiologies. Hence laboratory demonstration of zoospore production remains confirmatory. But this is fraught with limitations of longer diagnosis time and unavailability of growth media (broth culture or water containing antibiotic agent and human hair).

Immunohistochemical staging has been helpful for the diagnosis of P. insidiosum. Hyphae of pythium stain positive for acridine orange hydrochloride and lactophenol blue. The presence of a thick cell wall, few septations, and numerous vesicles have been seen. In gomori methenamine silver staining the filaments of P insidiosum appear as brown colored narrow to broad, short or long, sparsely septate, without or with perpendicular to obtuse angle branching. Interspersed filaments may show hyphal swellings in some.[10] Pythium does not take the standard PAS stain, however when PAS 1% is used for 5 minutes, it takes up light pink to pale magenta staining. This explains the difference in cell wall composition between fungi and pythium. Mittal et al [10] have described a novel staining technique using IKI-H2SO4, which stains pythium filaments bluish-black.

Confocal microscopy can be an aid for quick diagnosis of P. insidiosum. Multiple refractile filaments often showing right-angled branching and arranging in alphabetical patterns like X, Y, or S can be demonstrated on confocal microscopy. However, there can be a significant overlap of features seen with other fungi. Polymerase chain reaction using targets like ITS1, ITS2, Exo-1,3-β-Glucanase, and 5.8 S rRNA gene can be used.[14][15] [16][17][18]A new technology by the name of matrix-assisted laser desorption ionization-time of flight mass spectrometry (MALDI-TOF) has shown success in the quick diagnosis of Pythium.

Due to its close morphological resemblance to fungal hyphae, pythium keratitis is often misdiagnosed and treated as fungal keratitis till signs of non-resolution are apparent. Also, resemblance in the history patterns of both patients might prove confusing for the clinician. Classic tentacle lesions with subepithelial pinhead infiltrates can clinch the diagnosis of Pythium keratitis. Further staining patterns with PAS and other immunohistochemical methods can differentiate between the two entities. Another closely resembling etiology is Acanthamoeba keratitis, which also presents with a similar history of exposure to aquatic environments. The differentiating factor is essentially a ring-shaped ulcer with radial perineuritis and diagnostic double-walled cysts in microscopy in acanthamoeba patients.

The prognosis of Pythium keratitis is not very good firstly due to delay in diagnosis and secondly because of the dearth of management options. The remission of disease by medical therapy alone is questionable. As already discussed, P. insidiosum is refractory to antifungal therapy. However few cases have been seen to respond to 1% itraconazole. [11] In vitro studies have shown varied success with antimicrobials acting on protein synthesis inhibition. In particular, macrolides and tetracyclines have shown synergistic activity.

Antibacterial drugs like azithromycin and minocycline have shown success in the management of Pythium keratitis. A triple regimen consisting of topical linezolid 0.2% hourly, topical azithromycin 1% hourly, and oral azithromycin 500mg for 3 days each week till expanding lesions resolve has been proven beneficial.[12] But this therapy worked only in less severe cases (<6mm).[19]

Other combinations like that of topical and oral azithromycin and topical voriconazole[20], a combination of topical minocycline ointment four times daily, hourly chloramphenicol drops and oral linezolid 1200 mg BD [21], and a combination of oral doxycycline and clindamycin and topical azithromycin have also been used with partial success. Β-glucan inhibitors like caspofungin have been tried but are inconclusive. Another agent, mefenoxam, RNA synthesis inhibitor, has shown some promise in animal experiments. Debulking of infectious load by scraping can be beneficial but caution should be executed for the risk of perforation in severe cases.

Early penetrating keratoplasty in diagnosed cases has been believed to be the gold standard treatment. A clear margin of 1 mm incorporating the reticular expanding lesions is advocated. Thorough anterior chamber wash should be accompanied to leave no residual focus of infection otherwise recurrence is a rule. Adjunctive modalities have been used to decrease recurrence. These include single-cycle cryotherapy with a retinal probe at the graft host junction.[22] In patients with scleral involvement, 99.9% absolute alcohol should be applied beyond cryo marks extending to the posterior limit of infected sclera for 20 seconds. [22]

Evisceration or enucleation may be required in severe infection with diffuse scleritis or endophthalmitis. Isolated reports of vaccine containing P. Insidiosum antigen (PIA) used to decrease post keratoplasty infection recurrence have been noted. But the success of this therapy is not documented and needs larger study validation.

Daily monitoring of these cases is warranted for timely intervention. The rapidly progressive and aggressive nature of the pathogen can lead to sudden worsening in a matter of a few days itself. There is a more than 50% recurrence reported even after timely surgical intervention by penetrating keratoplasty and as early as within two weeks.[23][7] Careful evaluation of graft clarity and particularly graft host junction should be done. Any new infiltrate or anterior chamber exudation should be considered serious. These patients may need prompt regrafting with additive therapies in the form of cryo or alcohol treatment as described. Severe cases, suspected orbital infections, and large scleral involvement should undergo imaging to rule out chances of cavernous sinus thrombosis.

The recent advances in diagnosis and treatment of Pythium keratitis has made way for better results. Large case series have evaluated the prognosis of pythium and report that the once severely morbid ocular disease has improved outcomes with timely intervention. The rate of radical procedures like evisceration and enucleation has decreased to almost 15% as opposed to 90% in historical times.[24] Still, the high recurrence in grafts is worrisome. Advances in molecular technology may lead to the identification of the genome of P. insidiosum and hence better therapeutic strategies could further increase the survival of grafts in these patients.