Glaucoma is a leading cause of blindness and visual impairment both globally and nationally. It is estimated that in 2020, close to 75 million people worldwide will suffer from the condition; this figure is expected to grow to 110 million people by 2040.[1] Given the prevalence of the disease and its devastating consequences, glaucoma and its diagnosis, pathogenesis, and treatment have become major areas of investigation for researchers.

While numerous types and subtypes of glaucoma exist, it can broadly be divided into open angle glaucoma and angle-closure glaucoma.[2][3] Primary open angle glaucoma (POAG) is a chronic ocular condition in which the angle between the surface of the iris and the cornea is open, which is the normal healthy state. In open angle glaucoma, there is increased resistance to aqueous outflow at the level of the trabecular meshwork; this increased resistance causes an increase in upstream pressure.[2][3] Conversely, primary angle-closure glaucoma (PACG) can present acutely or chronically and features a mechanical obstruction (generally by the iris or pupil) that prevents aqueous outflow through the angle between the iris and the cornea.[2][4][3] Both conditions can cause an increase in intraocular pressure (IOP) and cause subsequent vision loss through retinal ganglion cell death. [2]

Glaucoma as a disease develops insidiously and may not present with vision deficits until considerable neural damage has occurred.[2][5] The primary chronic symptom of glaucoma is progressive vision loss; patients that develop loss of vision starting at the periphery describe this as “tunnel vision.” With respect to changes in visual acuity, patients have also reported light sensitivity and decreased ability to detect contrast, which is likely due to optic nerve damage.[6][7] Additionally, glaucoma patients also report glare, which may be due to glaucoma or medications used to treat glaucoma.[7] Acute symptoms include headache, eye pain, redness of the eye, excessive tearing, and sudden worsening of vision.[2][4][5]

The treatment for glaucoma is diverse and involves increasing therapy until the IOP is decreased and the deterioration of the vision ceases. First-line treatment for chronic glaucoma is eye drops consisting of beta-blockers or a prostaglandin analog. Second line pharmacologic treatment involves using topical alpha-agonists and carbonic anhydrase inhibitors.[4][5] Oral medications can be added if the IOP remains uncontrolled and the patient is able to tolerate them.[4][5] In addition to medications, laser treatments, which can be done in the clinic, have been shown to successfully decrease IOP in eyes with glaucoma; popular laser treatment options include argon laser trabeculoplasty (ALT) and selective laser trabeculoplasty (SLT).[8][9] Surgery, in the form of trabeculectomy, which involves surgically creating a hole through the sclera to relieve intraocular pressure, or glaucoma drainage device implantation, can be considered if IOP control cannot be achieved through medications alone.[4][5][3][10] Given the successes of glaucoma drainage devices as presented in the Tube Versus Trabeculectomy Study, the popularity of tube shunt surgery as a surgical option has increased.[11]

While surgical treatment for glaucoma is more definitive, it comes with a set of risks and complications that must be weighed against potential benefit. The more common complications of glaucoma surgery include infection, hyphema, hypotony, vision loss, bleb formation, suprachoroidal hemorrhage, diplopia, strabismus, and pupillary/iris abnormalities.[4][12] The objective of this article is to review pupillary abnormalities, specifically pupillary peaking and iris retraction, in greater detail and understand how often and how clearly they have been documented in the literature as a complication of glaucoma drainage device implantation surgery. 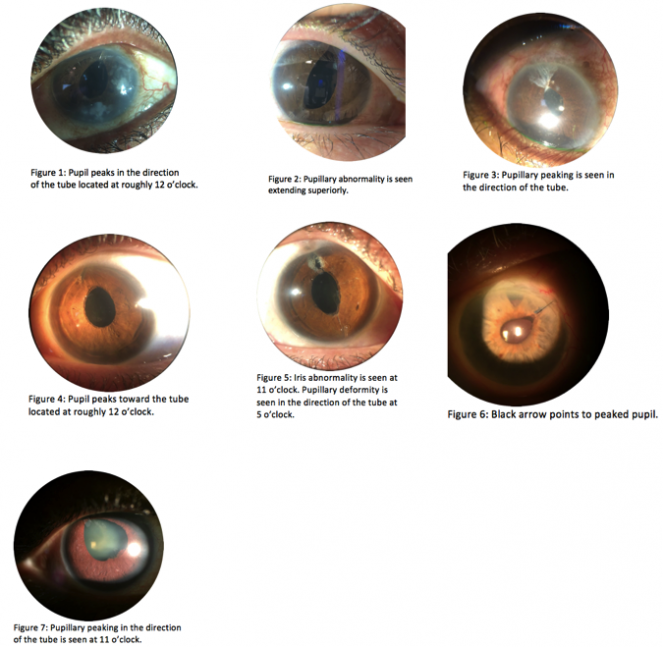 Review of the Literature

Since the implementation and use of the Baerveldt and Ahmed Implants, large-scale studies have been done to evaluate the short and long-term complications of these surgeries. Though these studies have identified a myriad of post-operative and chronic complications, many do not clearly identify or describe pupillary peaking or distortion as a complication.[18][19][20][21][22][23] Of the few cases of post-tube-shunt surgery pupillary peaking that have been documented in the literature, most have been identified in pediatric eyes. The first documented case of a pupillary abnormality after GDD implantation was reported by Al-Torbak and Edwards in 2001, and occurred in a three-year-old girl with bilateral congenital glaucoma.[24] From their retrospective chart review of 60 pediatric eyes that had undergone Ahmed Valve placement, Morad et al. found that one eye had a complication in which the iris blocked the entrance of the tube, but there was no comment on peaking of the pupil.[11] In their six-case series on pediatric glaucoma, Pirouzian and Demer found that three eyes developed clinically insignificant but cosmetically prominent pupillary irregularities after Ahmed Glaucoma Valve placement.[13] Similarly, in their study of 79 eyes with congenital (38 eyes) and aphakic (41 eyes) glaucoma, O’Malley Schotthoeffer et al. found that 16% of eyes in the congenital glaucoma group and 7% of eyes in the aphakic glaucoma developed post-operative pupillary abnormalities.[25] Outside of these studies, pupillary peaking in the setting of GDD implantation surgery has not been well described.

The exact pathogenesis behind pupillary peaking after GDD implantation has not been clearly delineated, but researchers have put forward theories to attempt to explain this. Pirouzian and Demer surmised that the phenomenon of pupillary peaking may occur due to (1) pressure-flow turbulence that occurs at the tube and draws the iris toward the tube opening, (2) inflammation in response to talc on the tube, (3) formation of peripheral anterior synechia, (4) tube retraction and subsequent iris pull secondary to mechanical forces (i.e. eye rubbing), or (5) iris incarceration and entrapment in the setting of fistula creation.[13] Furthermore, they proposed two surgical techniques to prevent this complication: insertion of the tube posterior to the grey surgical limbus line and performing a surgical iridectomy at the entrance of the valve to alter fluid flow in that area.[13]