Presbyopia is an age-related loss of accommodation[1], whose physiopathology is not completely well understood. It’s the most frequent refractive error over 40’s[2] and is estimated that in 2050 there will be 1.782 billion people with presbyopia[3].

Classically corrected with reading glasses, the growing expectation of patients regarding spectacle independence led to the development of different surgical options.

These surgical correction techniques can be divided in two categories[1]:

Accommodation is an active process, dependent on the elastic properties of the lens. The cornea, in comparison, is a more static tissue with low depth of focus[4]. Enhancing corneal depth of focus through the creation of multifocal corneal surface is the basic mechanism of PresbyLASIK – a term introduced by Ruiz in 1996[5].

The technology of current excimer laser devices and femtosecond lasers enabled huge amount of flexibility in ablation patterns, including a range of multifocal corneal ones. As stated before, all of them based on modifying spherical aberration to increase focal amplitude.

The principles of each algorithm may be based on the dioptric power of refractive error and presbyopia correction calculation, corneal asphericity quotient (Q-value), and higher-order spherical aberrations changes or optical and transition zone manipulation[6].

Multifocal Transition Profile generates a transitional vertical multifocal ablation based on the creation of an intentional decentration of a hyperopic ablation profile[7]. It’s not currently being used, because it’s associated with significant vertical coma in corneal anterior surface[8].

It is pupil dependent and can be applied at the centre of the cornea in myopic and hyperopic profiles[1]. It’s also possible to use after initial myopic or hyperopic laser treatment for far vision[9][10].

The most important technical limitation is establishing the most adequate axis: the visual or optical axis, or the cornea vertex[1][2]. A lack of adequate alignment will induce coma aberrations.

It is the most commonly used PresbyLASIK technique[11]. There are mainly three different technologies available, all of them with published outcomes in hyperopic patients:

Combines the wavefront-guided hyperopic treatment with a presbyopic shape - steepens the central cornea for near vision while treating the periphery for distance[12].

Creates a hyperpositive area in the central 3.0mm zone, giving an addition of approximately 2 diopters[13] [14](Fig. 2).

Creates a biaspheric multifocal corneal surface with a central hyperpositive area (to achieve +0,75 to +2,50D near correction) surrounded by an area in which the ablation is calculated to correct the distance refractive error. It’s the only technology of central PresbyLASIK with published results in myopic and emmetropic eyes[15][16] (Fig. 3).

In Peripheral PresbyLASIK the peripheral cornea is ablated to create negative asphericity. The centre of the cornea is left for far vision and the middle periphery for near vision (for example, Nidek Advanced Vision, Nidek co. LTD, Gamagori, Japan) - fig. 4

The major limitation of this technique is in myopic correction, because it’s necessary to remove a significant amount of corneal tissue to create a hyperprolate shape[1][2]. For this reason, it’s more adequate for hyperopic eyes. Moreover, this method also requires an efficient excimer laser beam profile capable of compensating the loss of energy that happens while ablating the peripheral cornea.

As central PresbyLASIK, it’s pupil dependent too and has the same technical limitation related to establishment of the axis.

It can be performed on emmetropic, myopic and hyperopic presbyopes. 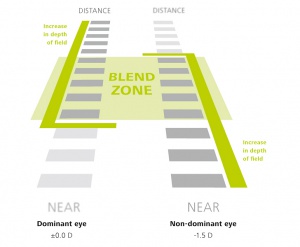 Patient selection is crucial for having good results – patient expectations, job and hobbies must be considered[13][19].

Patients with early presbyopia (40-55 years of age) seems to be the ideal candidates for PresbyLASIK, whose lenses are still transparent and in whom intraocular surgery may be more risky than corneal refractive surgery. Other patients who could be good candidates for multifocal corneal ablations are pseudophakic with a previously implanted monofocal IOL.

The majority of PresbyLASIK treatments have been performed in hyperopic patients – these patients[5][9][10][13][14][21], despite not having relevant different outcomes from myopic ones, are typically more satisfied[22].

Central model is more advisable to achieve multifocality due to the physiologic pupil miosis during accommodation, and most papers corroborate that, revealing better UNVA in central models. On the other hand, peripheral presbyLASIK theoretically should provide better distance vision but that’s not corroborated by study results. However, both were associated with a relevant loss of at least two lines of distance visual acuity (2%-28%), a significant decrease in contrast sensivity and an important level of retreatment (6,75%-28,6%), which of course is undesirable[1].

It should still be noted that they may be supplemented with a relative degree of micro-monovision but a comparative study between this option and symmetrically presbyLASIK on both eyes[2].

Relatively to Laser Blended Vision® (combination of induced asphericity and micro-monovision), results reveal good near and distance vision and a superior safety profile is not currently available [11][17][29][30][31].

We need to be aware that one of the most important limitation of PresbyLASIK is the lack of strong scientific evidence, namely the lack of reports with long follow-up and the absence of standardized outcome measures[1][32].

Another important issue is that even with good results in mild presbyopia, the truth is that the disease continues to evolve and efficacy diminishes over time. In addition, when these patients are undergo lens surgery, accurate IOL power calculation is more difficult and the possibility of multifocal IOL implantation are limited due to the multifocal corneal ablation.

Multifocal corneal ablations could have a promising future but presently application remains limited due to the temporary benefit of the procedure and the relatively high associated incidence of visual quality loss. Achieving a stable multifocal cornea with long term results remains a challenge.