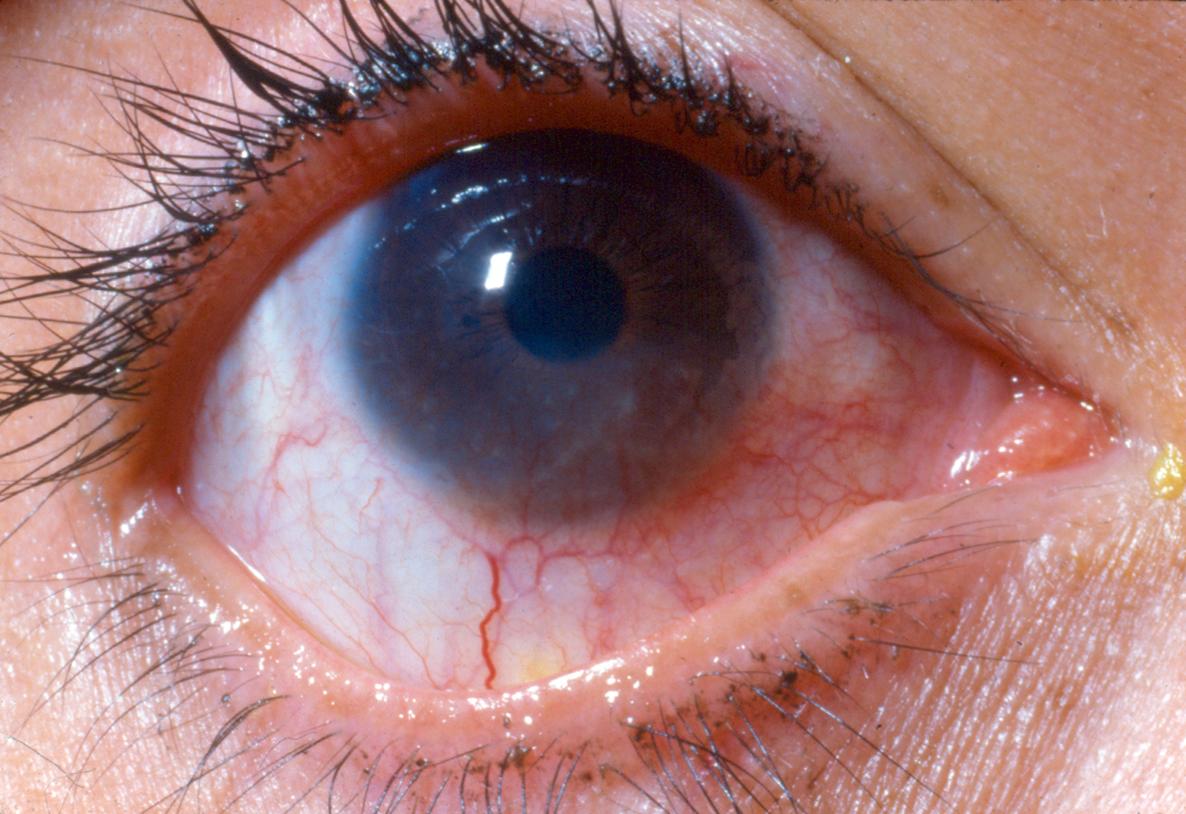 Phlyctenular keratoconjunctivitis is postulated to occur secondary to an allergic, hypersensitivity reaction at the cornea or conjunctiva, following re-exposure to an infectious antigen that the host has been previously sensitized to.[2][7][8] Antigens of Staphylococcus aureus and Mycobacterium tuberculosis are most commonly associated; however, Herpes simplex, Chlamydia, Streptococcus viridians, Dolosigranulum pigram and intestinal parasites including Hymenolepis nana have also been reported as causative agents.[3][5][10][11][12][13]

The clinical presentation of phlcytenulosis is dependent on the location of the lesion as well as the underlying etiology. Conjunctival lesions may cause only mild to moderate irritation of the eye, while corneal lesions typically may have more severe pain and photophobia. More severe light sensitivity may also be associated with tuberculosis related phlyctenules compared to S. aureus related phlyctenules.[8] Phlyctenules can occur anywhere on the conjunctiva but are more common in the interpalpebral fissure and are frequently noted along the limbal region. They commonly present with a gelatinous, nodular lesion with marked injection of the surrounding conjunctival vessels. The lesions may show some degree of ulceration and staining with fluorescein as they progress. In some cases, multiple 1-2mm nodules may be present along the limbal surface.

Corneal phlyctenules similarly begin along the limbal region and frequently degenerate to corneal ulceration and neovascularization. In some instances, the phlyctenule will progress across the corneal surface due to repeated episodes of inflammation along the central edge of the lesion. These “marching phlyctenules” demonstrate an elevated leading edge trailed by a leash of vessels.

The diagnosis of phlyctenular keratoconjunctivitis is made based on history and clinical exam findings. The underlying infectious etiology requires further investigation when the possibility of tuberculosis or chlamydia is suspected. Chest radiographs, purified protein derivative skin testing or QuantiFERON-gold testing should be ordered for patients with a history of travel to tuberculosis endemic regions or symptoms consistent with tuberculosis infection. For patients suspected of having chlamydia, immunofluorescent antibody testing and PCR of conjunctival swabs provide quick and accurate screening. If positive, appropriate systemic treatment of these infections is required as well as screening and possible treatment of close contacts.

Phlyctenular nodules can lead to ulceration, scarring and mild to moderate vision loss.[3][15] Although rare, corneal perforation is possible as well.[3][16]

The first line of treatment for phlyctenular keratoconjunctivitis is to decrease the inflammatory response. Phlyctenulosis is generally responsive to topical steroids. However, risk of rise of intraocular pressure has to be kept in mind. In cases with multiple recurrences, or those which become steroid dependent, topical cyclosporine A is an effective treatment option.[17] The use of cyclosporine A may reduce the sequelae of long term steroid use such as cataracts, ocular hypertension and decreased wound healing. In cases with corneal ulceration, pretreatment or concurrent use of an antibiotic is recommended. Corneal cultures may also be considered prior to starting treatment.

In addition to treating the inflammatory response, it is important to decrease the source of antigens inciting the inflammation. This usually requires treating the associated blepharitis or underlying infectious process. In cases of blepharitis, lid hygiene with warm compresses and lid scrubs should be started. One study found that 1.5 % topical azithromycin was effective in treating phlyctenular keratoconjunctivitis with underlying ocular rosacea.[18] Adjunctive treatment with oral doxycycline may also be of benefit. In children under the age of 8, erythromycin is preferred to prevent dental discoloration from tetracycline use.[3]

In patients with communicable diseases such as tuberculosis and chlamydia, the underlying infections should be properly addressed and treated appropriately. Chlamydia induced phlyctenular keratoconjunctivitis should be treated with azithromycin or doxycycline. Patients with positive tuberculin tests should be referred to receive proper systemic treatment of tuberculosis. Close contacts should also be evaluated and treated fittingly.