As an X-linked recessive condition, males are mainly affected by PMD.[1] Females are mainly carriers and heterozygous females experience no neurological symptoms. PMD is an uncommon condition. The incidence of PMD is as follows:[1] 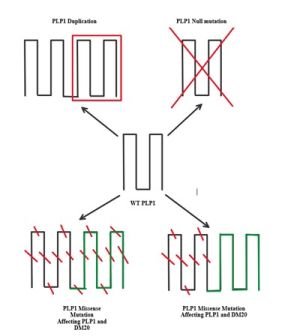 Summary of mutations known to cause PMD[2]

PMD is due to an X-linked recessive mutation in the PLP1 gene (e.g., duplication, missense, and deletion).[1] These mutations eventually lead to a reduction or, in some cases, complete elimination of myelin production in affected individuals. This result is likely due to the critical role of PLP1 in producing the myelin sheath by encoding a major protein component known as proteolipid protein.[3]

PLP1 is a gene responsible for encoding a major protein in the myelin sheath known as proteolipid protein (PLP).[3] Mutations in PLP1 have varying mechanisms of impact depending on the type of mutation that occurred.[1] Point mutations result in misfolding and, later, impaired passage through the Golgi apparatus, which is responsible for protein modification. Subsequently, it amasses in the endoplasmic reticulum (ER). Hindrance of the ER leads to decreased protein production and eventual toxicity in oligodendrocytes, resulting in reduced myelin production.

Null mutations, those that result in premature stop codons and shortened protein products, do not accumulate in the ER, resulting in far fewer oligodendrocyte casualties.[1] However, decreased myelin production has been observed in individuals with a null mutation. Therefore, the end product of this mutation is a mild phenotype. Individuals with deletion mutations share a similar phenotype with a similar underlying mechanism. However, missense mutations result in the most severe presentation because they lead to eventual oligodendrocyte apoptosis and axonal injury. Mutations in DM20, a protein in close proximity to PLP1, also play a key role in determining disease severity.

Due to the X-linked recessive nature of inheritance, key risk factors for PMD include:[1]

There are three documented forms of PMD.[1] Type I is the most severe with connatal involvement while type III, known as the classic type, is the least. Type II, also known as the transitional type, falls in between I and III in terms of severity. Type III PMD initially presents with symptoms at around 1 year old. These patients become spastic but are able to maintain limited ambulation and remain intact cognitively. In contrast, Type I patients present with symptoms upon birth. These patients are unable to ambulate, unable to speak, and are significantly impaired cognitively later in life, manifesting as delayed acquisition of developmental milestones. Patients also endorse a history of seizures. Type II PMD bears features of both type I and type III.

According to a case series conducted by Velasco Parra et al. in Colombia including patients ranging from 6 months to 16 years old, features common to all documented forms of PMD include:[4]

Observed findings outside of the case series include:

Type I, being more severe, demonstrates further findings including:[1]

Ocular Findings in PMD can include:

Imaging studies are critical in diagnosing PMD. Key imaging modalities for diagnosis include:

Lab tests to confirm the diagnosis include genetic tests such as:[1]

The differential diagnosis for PMD includes:

At this time, there is no treatment that can completely cure PMD. Most treatment modalities revolve around palliative care and symptom relief.[1] These include the use of skeletal muscle relaxants like baclofen, diazepam, or tizanidine to address spasticity, a gastrotomy to assist with pharyngeal weakness with subsequent enteral feeding, and physical therapy to address scoliosis in some patients.

Dietary interventions may also be effective in reducing the severity of PMD. Specifically, a diet rich in cholesterol was capable of increasing the life span of oligodendrocytes according to a study conducted by Saher et al.[8] Furthermore, Stumpf et al tested a ketogenic diet, one that is high in fat and low in carbohydrates, in mouse models and observed the regeneration of oligodendrocytes.[9]

Although there are no definitive treatments available to cure PMD, there are some treatments in development that can target its molecular pathology. One such treatment uses the CRISPR-Cas9 system in mouse models to suppress the expression of PLP1, resulting in a phenotype similar to the mild form.[10] Other treatments focus on reducing the expression of PLP1 through pharmacological interventions. Lonaprisan is an example of a progesterone receptor antagonist that decreases PLP1 expression.[1]

The prognosis of PMD patients depends on the form that they present with. If left untreated, patients with Type I PMD would not survive past childhood due to respiratory failure. [1]However, with intervention, these patients can survive up to the third decade of life. Patients diagnosed with Type III PMD can live as long as the seventh decade of life.

Clinicians should recognize the cardinal features of PMD and the different PMD types. Nystagmus and poor vision are the predominant presentations of PMD. Although there is no cure currently for PMD, future research is ongoing to reduce or mitigate the PLP1 effects.