Over the past decade, the use of glaucoma drainage devices (GDDs) has significantly increased in the management of glaucoma. GDDs effectively reduce the intraocular pressure (IOP), however, several complications such as hypotony, endothelial cell loss, and tube erosions are concerning. The two most commonly used GDDs are the Ahmed glaucoma valve (New World Medical, Rancho Cucamonga, CA) and the Baerveldt glaucoma implant (Johnson & Johnson, Santa Ana, CA). The Paul glaucoma implant (PGI, Advanced Ophthalmic Innovations, Singapore, Republic of Singapore) is a novel valveless GDD that was designed by Professor Paul Chew in an attempt to optimize the efficacy with a theoretically higher safety profile. However, literature evaluating its efficacy and safety is still limited.

The PGI design has many characteristic features (Figure 1). It is a valveless GDD made up of medical-grade silicone which allows the device pliability and easier implantation. The internal (0.127 mm) and external (0.467 mm) tube diameters are significantly smaller than those of the Ahmed glaucoma valve or Baerveldt glaucoma implant. The smaller diameters reduce the area of contact between the tube and the corneal endothelium which theoretically reduces the rate of endothelial cell loss. The extraocular portion of the tube shunt is smaller which presumably reduces the long-term risk of tube erosion and exposure. Although the tube caliber is smaller than other GDDs, there was no resistance to aqueous flow and theoretically reduces the risk of early hypotony. The lumen can be easily occluded using a 6/0 or 7/0 polypropylene stent compared to the 3/0 which is usually used to occlude the tube in the Baerveldt glaucoma implant.[1] The end plate has been designed to allow more area for aqueous drainage while reducing the area tucked under the recti muscles. The breadth of the endplate is 21.9 mm, and the width is 16.11 mm. The end plate surface area is 342.1 mm2 which is slightly smaller than that of the Baerveldt glaucoma implant but significantly larger than that of the Ahmed glaucoma valve. The anteroposterior depth of the PGI is larger compared to that of the Baerveldt glaucoma implant which allows the plate to extend further back, while the shorter breadth (wingspan) reduces the area of the plate tucked under the recti muscles which may theoretically reduce the postoperative risk of strabismus and diplopia.[1] 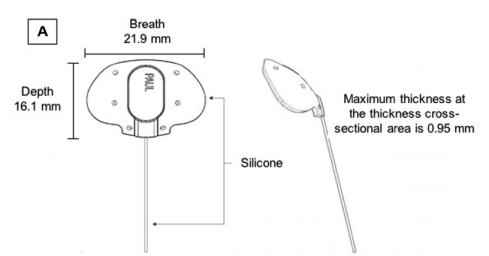 Another retrospective study by Jose and colleagues[3] included 24 patients at a mean age of 42 years at the time of PGI surgery. All patients had a minimum of 12 month follow-up period. They defined success as a postoperative IOP of >5 mmHg and ≤21 mmHg with at least 30% IOP reduction with (qualified) or without (absolute) glaucoma medications. They reported an absolute success rate of 33% and a qualified success rate of 75%. There was a significant reduction of mean IOP from 31.4±10.0 mmHg preoperatively to 12.5±4.3 mmHg at the last follow-up. The mean number of glaucoma medications was significantly reduced from a mean of 3.0 at the baseline line to 0.9 at the 12-month follow-up. The authors reported no cases of postoperative hypotony requiring intervention.

Tan and colleagues[4] retrospectively evaluated the 2-year outcomes of PGI in 45 patients with a mean follow-up of 24.9±2.0 months. They reported a significant reduction in the mean IOP from 19.8±6.3 mmHg on a mean of 3.2±0.8 glaucoma medications preoperatively to a mean of 13.9±3.7 mmHg on a mean of 0.29±0.65 glaucoma medications at the 24-month follow-up visit. Ten eyes developed shallow anterior chamber postoperatively which were self-limiting and four eyes developed clinically significant hypotony that required intervention.[4]

The PGI is a novel non-valved GDD that effectively reduces the IOP. However, further prospective studies with longer-term follow-up comparing its efficacy and safety to other available GDDs are needed.