Orbital varices are venous malformations of the orbit caused by vascular dysgenesis [1]. They consist of a plexus of thin-walled distensible low flow vein-like vessels that are commonly intrinsic to the normal circulation [2]. They are considered to be hamartomatous.

Orbital varices are a rare condition, accounting for 0-1.3% of all histopathologically proven orbital masses [3]. Orbital varices are usually diagnosed between the ages of 10-30 years. However, they can be seen in every age group, even in neonates[3]. Most cases occur unilaterally. Males and females are affected equally [4].

The Orbital Society created a classification of vascular lesions into three categories based on flow:

The pathophysiology of this condition is not well understood. Localized weakening of the vein wall may be the inciting event, leading to stagnant blood flow in the vein. The orbital veins lack valves, and therefore pooling of blood is increased, resulting in thrombosis. The thrombosis recanalizes over time, however the resistance to blood flow results in proximal dilation of the vein, producing a varix [3]. This lesion most commonly involves the superior ophthalmic vein, but other veins of the orbit can also be affected.

A diagnosis of orbital varices should be explored if a patient reports intermittent proptosis that is position dependent and increased with Valsalva maneuver. Another presentation that should prompt an orbital varix workup is enophthalmos. Imaging should be obtained to assist with diagnosis, however the varices may not be seen if they are not distended, so valsalva maneuvers should be employed.

Most patients will experience positional proptosis with a head-down position, and intermittent proptosis that is exacerbated by coughing, straining, the Valsalva maneuver, or compression of the jugular veins. This occurs because the orbital venous system is connected to the systemic venous circulation. Some small nondistensible orbital varices will not cause positional proptosis because they have none or negligible connection to the systemic circulation [3]. Some patients may complain of intermittent diplopia. Occasionally, the varix can present acutely, with onset of painful proptosis, compressive optic neuropathy with decreased visual acuity, resulting from thrombosis or hemorrhage of the affected vein.

Exam can show unilateral intermittent non-pulsatile proptosis with maneuvers that increase venous pressure, without an associated bruit [2]. Long-standing lesions can be associated with enophthalmos at rest, possibly due to atrophy of surrounding orbital fat or chronic distension[5]. Rarely, large lesions involving the superior ophthalmic vein may present as a lacrimal mass. One case study reported the finding of ipsilateral pupil enlargement during Valsalva’s maneuver in a patient with an orbital varix, that resolved as the proptosis resolved [6]. This was attributed to compression of the ciliary ganglion by the engorged varices, inhibiting tonic pupillary constriction.

A patient with a thrombosed orbital varix can have decreased visual acuity, severe pain, and increased proptosis. 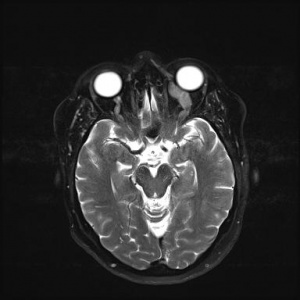 Axial MRI of orbital varice in the left orbit. Courtesy of Michael Migliori, MD
CT and MRI both demonstrate an irregular mass, usually in the posterior orbit, or a tortuous, dilated vessel that tapers toward the orbital apex and lacks internal septae [3].

In some cases, the varix is not seen on CT or MRI, but will become apparent if the patient performs a Valsalva maneuver during the scan.  If there is no thrombosis or hemorrhage, the varix is hypointense on T1 and T2-weighted MRI compared to the extraocular muscles. The varix can demonstrate heterogeneous signal intensity consistent with blood in different stages of breakdown. If thrombosis is present, it appears hyperdense on pre-contrast CT. On ultrasound, varices are seen as anechoic tubes, with Color Doppler Imaging displaying increased venous flow with occasional flow reversal with Valsalva. On plain X-ray and CT, phleboliths (foci of calcification) may be seen.

Imaging can also reveal orbital expansion (more common in children), or an orbital wall defect[8]. There is a 10% rate of non-contiguous intracranial vascular malformations, therefore careful evaluation of the brain is required[3].

The differential for thrombosed varices encompasses that of an orbital mass:

To date there has been no definite standardization of treatment for orbital varices. Small lesions do not usually require treatment. Recurrent thrombosis, severe proptosis, pain, or optic nerve compression are indications for intervention.

Deep distensible venous malformations have been traditionally treated with surgery. Surgical excision can be challenging due to the friable nature of the lesions with a tendency to bleed, which can lead to severe hemorrhage and optic nerve compromise from vascular insufficiency[2]. Often, the varix is in a collapsed state when the patient is supine during the surgery, contributing to the difficulty in finding and dissecting the varix. Placing the patient in Trendelenburg position, jugular compression, or requesting the anesthesiologist to increase the intrathoracic pressure can help[3]. Surgical excision has been reported to be facilitated by the use of clips, endovascular embolization, and percutaneous injection of N-butyl cyanoacrylate NBCA glue[11].

Embolization been used as an alternative to surgical excision, as well as prior to surgical excision to decrease the risk of bleeding. The first description of embolization for the treatment of an orbital varix was in 1994 by Takechi et al. using transvenous microcoil embolization with 204 platinum microcoils via Guglielmi detachable coil (GDC)[12].  Endovascular embolization of the varix can be performed via the jugular vein and cavernous sinus, or after surgical exposure of the varix. Compressive optic neuropathy and severe vision loss have been reported following endovascular coiling, due to formation of intralesional thrombosis and subsequent enlargement of the lesion[13].

Percutaneous injection of NBCA glue into the varix has been used to embolize orbital varices prior to orbitotomy surgery. Percutaneously injected NBCA was found to be useful in visualizing the varix during the excision, and provided good hemostasis in a retrospective case series of 4 patients [14]. A case series reported a giant cell foreign body response to the glue cast, after glue embolization for a varix in the lower eyelid[11].

This technique has been shown to be effective in treating superficial facial venous malformations, however it has not been recommended for use in deep orbital varices. If alcohol leaks from the injection site, it can produce local tissue injury, therefore increasing risk of optic nerve injury (11, 15).

CO2 laser ablation has been used as an adjunct to surgical excision. Success has also been reported with use transcutaneously and after surgical exposure without subsequent surgical excision for both superficial and deep venous malformations[11][15].

Most cases of primary orbital varices have a good prognosis. Recurrence after surgical intervention can occur, but most patients remain stable.