Orbital Mesenchymal Chondrosarcoma is recognized by the following codes as per the International Classification of Diseases (ICD) nomenclature:

C41.0 Malignant neoplasm of bones of skull and face

The term orbital mesenchymal chondrosarcoma is used to describe a malignant neoplasm composed of undifferentiated mesenchymal cells and mature cartilage.

Orbital mesenchymal chondrosarcoma may be staged according to the TNM system as described by the American Joint Committee on Cancer, based on the tumor size, involvement of lymph nodes, and presence of metastases.

The undifferentiated mesenchymal cells and the mature cartilage found in this neoplasm originate from cartilage-forming primitive mesenchyme. The histology and growth pattern of these neoplasms have been found to resemble the growth pattern of fetal cartilage, which is centripetal in nature. Further, these neoplasms have also been shown to have features resembling the early condensational phase of cartilaginous differentiation. The gene, Sox9, which regulates chondrogenesis, has been found to be expressed in 95.5% of extraskeletal mesenchymal chondrosarcomas (Arora 2018).[9]

Patients with mesenchymal chondrosarcoma of the orbit tend to be females in their second or third decades, but the tumor can present in any age or gender. In their history, patients may report a gradual loss of vision or diplopia. They may also complain of proptosis, ptosis, or pain (Hererra 2012).[1] Patients with secondary metastases may have additional systemic complaints. Additionally, patients may also have a history of bilateral retinoblastoma; children with such a history are at risk for orbital mesenchymal chondrosarcoma and other malignant mesenchymal tumors, even if they were not treated with radiation (Foster 2018).[11]

The normal thorough ophthalmologic exam should be performed with attention to visual acuity, pupils, and color vision for possible optic neuropathy. The eyelids and ocular adnexa should be examined for masses or changes in position, like ptosis or retraction. Extraocular movements, exophthalmos, and lagophthalmos can assess for extraocular muscle restriction, proptosis, or orbital mass. The optic nerve head can assess for optic nerve edema or atrophy.

Initial signs of orbital mesenchymal chondrosarcoma can be proptosis, followed by reduced vision (Garrity 2007).[12] Other signs seen on physical exam include eyelid edema, conjunctival mass, lagophthalmos, ptosis, hypoglobus, or a frozen globe. Patients may have a relative afferent pupillary defect. Optic nerve edema can be seen in advanced cases (Alkatan 2018).[2] Metastases, while rare, may also be found (Garrity 2007).[12] These orbital tumors tend to metastasize to the lungs (Duane 1985).[3]

Patients may present with a variety of symptoms including pain, diplopia, worsening vision, or conjunctival lesion. Patients may also report pain with extra-ocular movements and tearing (Alkatan 2018).[2] Cases of intracranial extension have been reported, in which case, patients may report headache (Sharma 2015).[13]

The diagnosis is usually made anywhere from 2 weeks to 19 months after symptom onset, with a mean of 6 months to time until diagnosis (Alkatan 2018).[2] While the signs and symptoms of the neoplasm are helpful, more essential are radiologic imaging, immunohistochemistry, and histopathology. The tumor is diagnosed primarily on the basis of histologic morphology due to its nonspecific immunoprofile and a general lack of availability of molecular diagnostics (Arora 2018).[9]

While serology has not been reported to aid in the diagnosis, the various ancillary tests as described below (pathologic examination, radiologic imaging, and immunohistochemistry) are of tremendous value.

Grossly, the tumor is usually a lobulated, well-circumscribed mass with a thin, fibrous capsule (Arora 2018).[9] It may be focally calcified, cartilaginous, or vascular. Its consistency may be soft or firm. The color can be white, grey, tan, or red, and the cartilaginous areas may be blue. Necrosis and hemorrhage are commonly seen on gross examination (Alkatan 2018, Duane 1985).[2][3]

Microscopically, the tumor has a biphasic pattern of undifferentiated mesenchymal cells and mature cartilage. The undifferentiated mesenchymal cells have round or elongated hyperchromatic nuclei and scanty cytoplasm. These cells are usually arranged in sheets or clusters. The cartilaginous areas may show loosely arranged mature hyaline cartilage, coarse calcification, or endochondral ossification with bone formation (Alkatan 2018).[2] The cartilaginous areas are usually well-circumscribed; they can, rarely, have indistinct borders and merge with the mesenchymal cells (Arora 2018).[9] Type 2 collagen is found in the extracellular matrix both in chondroid islands and non-chondroid areas. Pathology may also reveal a hemangiopericytic pattern, with delicate vascular channels among the mesenchymal cells (Garrity 2007).[12] 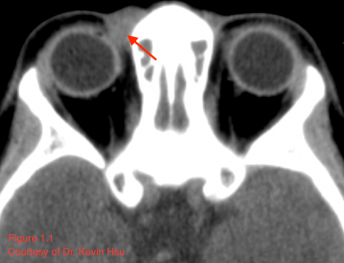 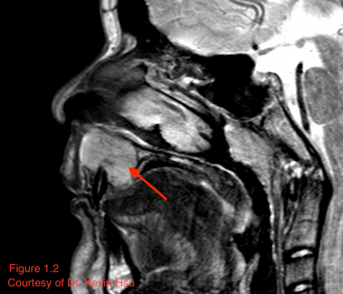 CT usually reveals a well-defined, heterogeneously enhancing mass with areas of fine and coarse calcification (Font 2009).[14] Such radiologic appearance is considered characteristic, and internal calcifications in particular should raise concern for possible mesenchymal chondrosarcoma (Angotti-neto 2006, Koeller 1999).[15][16] However, not all tumors will demonstrate such calcification (Lu 2009).[17] The lesion tends to have the same attenuation as muscle (Murphey 2003)[8], and generally, the radiopaque areas correlate with areas of high-grade sarcoma and hemangiopericytoma while radiolucent portions correspond to the areas of chondrosarcoma (Font 2009).[14] Figure 1.1 illustrates a case of orbital mesenchymal chondrosarcoma in which the CT revealed a homogenous isodense mass with the same attenuation as muscle and no areas of calcification. Although the lesion appeared non-specific on CT, the diagnosis was confirmed by histopathology after resection.

MRI can also reveal mild to moderate enhancement and calcified areas of the mass (Alkatan 2018).[2] The non-calcified portions of the tumor have a signal intensity equal or lower to gray matter on T1 weighted images, while being isointense to grey matter on T2-weighted images (Shinaver 1997).[18] In fact, the focal low-intensity areas surrounded by high-intensity areas on T2-weighted MRI have been thought to be characteristic of this neoplasm (Arora 2018).[9] MR may also reveal necrotic areas, as well as serpentine high-flow vessels which correlate to the areas of hemangiopericytoma (Murphey 2003).[8] Figure 1.2 illustrates a case of maxillary chondrosarcoma in which the lesion appeared isointense to hyperintense on T2, with a few foci of hypointensity possibly representing chondroid matrix mineralization.

Imaging may show the tumor in its more common location in the posterior retrobulbar space. The tumor has been reported to occur both within the muscle cone (Alktan 2018, Lu 2009)[2][17], as well as extraconally (Patel 2012).[19] Bony destruction, periosteal reaction, optic nerve sheath invasion, or muscle infiltration are rare but can occur (Garrity 2007, Murphey 2003).[12][8] However, the orbital bone may be widened from infiltration of the slowly growing lesion. Overall, CT and MRI are used in combination they can help identify mesenchymal chondrosarcoma from other similar lesions (Shinaver 1997).[18]

Immunohistochemistry can be extremely useful in identifying mesenchymal chondrosarcoma. These neoplasms show S-100 protein positivity in the cartilaginous areas and may also show scant positivity in the mesenchymal regions (Arora 2018).[9] The cellular regions tend to be positive for CD99 and vimentin (Alkatan 2018)[2] and may also be positive for neuron-specific enolase an Leu-7. Sox9 may be positive in both the mesenchymal and cartilaginous areas. The neoplasm stains positive for INI-1, which can help exclude epithelioid sarcoma, myxoid chondrosarcoma, or myoepithelial carcinoma (Arora 2018).[9]

Immunohistochemistry is usually negative for vimentin, actin, and cytokeratin (Hererra 2012).[1] Extra-skeletal chondrosarcomas are also negative for FLI-1, which can help in excluding the diagnosis when considering Ewing sarcoma. Nonetheless, the immunoprofile is not specific enough for the diagnosis of this neoplasm, and the morphology as seen on pathology continues to be the basis for diagnosis (Arora 2018).[9]

Surgery is the mainstay of treatment. When the tumor was initially identified, historically, exenteration was the primary form of removal (Garrity 2007)[12], and it may still occasionally be an option (Hanakita 2012).[20] However, resection with wide margins has now been found to be effective (Alkatan 2018).[2] As the tumor is usually located in the posterior orbit adjacent to the optic nerve, it is helpful to have both an oculoplastic surgeon and neurosurgeon present to remove the malignancy via coronal craniotomy. This allows for a wide view to allow complete excision and adequate control of bleeding during surgery (Garrity 2007).[12]

Chemotherapy and radiation are other treatment modalities, which may be used when the tumor cannot be resected or appears aggressive on histology (Alkatan 2018).[2] Radiation can be used pre-operatively to reduce tumor bulk. Additionally, patients who receive post-operative radiation tend to have increased survival. However, this has not been shown to be statistically significant and some believe that these neoplasms may be resistant to radiation (Hererra 2012).[1]

Chemotherapy is used as an adjuvant for aggressive tumors, including high grade lesions, those with rapid local recurrence, or those with potential metastases. Mesenchymal chondrosarcoma is often treated with the same regimen as Ewing’s sarcoma. A case report by Herrera et al noted that their patient with primary orbital mesenchymal chondrosarcoma was treated as such, and that the standard regimen includes vincristine, dactinomycin, cyclophosphamide and doxorubicin. Another chemotherapy option is ifosfamide with etoposide, which has shown an improved 5 year disease-free survival. Newer chemotherapy agents may target molecular pathways involved, including the phosphoinositide-3 kinase and MEK-extracellular signal-regulated kinase (ERK) signaling, as well as proliferator-activated receptor-gamma (PPAR-c) activity (Hererra 2012).[1] Overall, it is thought that multimodal therapy may lead to long-term survival and many patients now are treated as such with improved outcomes in recent years (Tuncer 2004).[6]

The prognosis for mesenchymal chondrosarcoma is poor and unpredictable (Duane 1985).[3] The all site survival rate is 55% at 5 years (Hererra 2012).[1] It has a long term survival of approximately 30% (Jacobs 1994).[21] This may be partly due to the fact that it has a tendency to recur late and can have delayed distant metastasis (Odashiro 2009).[22] However, orbital lesions have a higher survival rate than lesions in other sites. Indeed some patients may have complete tumor response and long term survival. Nonetheless, the tumor can recur or metastasize even 20 years after treatment, thus long-term monitoring in addition to early detection is essential (Hererra 2012, Alkatan 2018).[1][2]