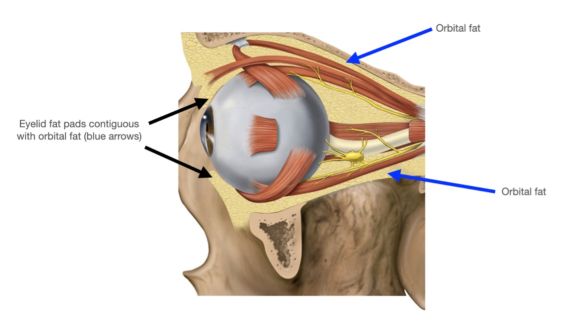 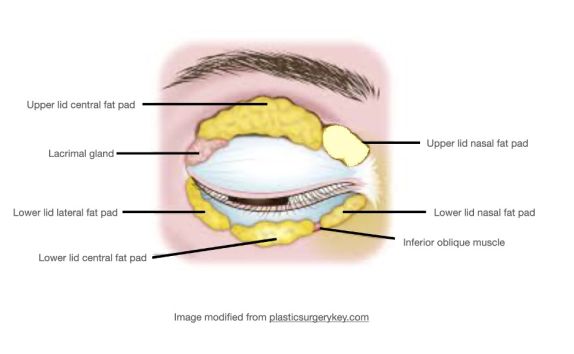 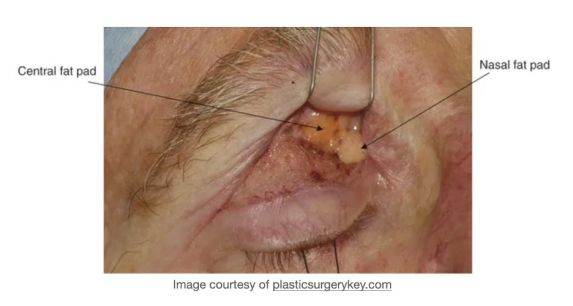 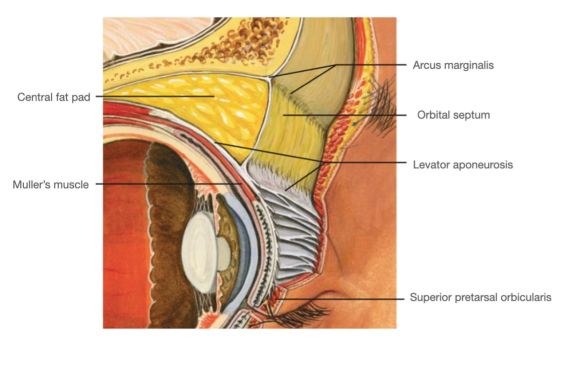 Adipose tissue, along with other connective tissues such as cartilage, bone, blood, and lymph, develop from a loosely organized embryologic framework called mesenchyme. While most mesenchymal tissues are derived from mesoderm, some head and neck mesenchymal tissues are derived from neuroectoderm. Most adipose tissue throughout the body is derived from mesoderm, the middle embryologic germ layer. Orbital adipose tissue is unique in that it has both mesodermal and neuroectodermal origins. Specifically, the intraconal fat and nasal fat pads of the upper and lower lids are derived from neuroectoderm while the upper and lower eyelid central fat pads and lower eyelid lateral fat pad are derived from mesoderm[8] [9]. Interestingly, the nasal and central lower eyelid fat pads are contiguous and separated only by the inferior oblique muscle. When the fat pads are dissected intra-operatively from the inferior oblique muscle, they can be slid back and forth underneath the muscle, a movement termed “inverse shoe-shine sign”[10]. Post-septal extraconal orbital fat begins developing at week 14,[8], while the central fat pad develops at week 16 and the nasal fat pad develops at week 18[5].

Figure 2: Neurulation is the formation of the neural tube which eventually gives rise to the neuroectoderm and neural crest cells

Neuroectoderm is the precursor to the central nervous system. Specialized migratory neural crest cells located at the crest of the ectodermal waves fuse during neural tube formation. These cells migrate to various destinations throughout the head and body to differentiate into a variety of cell types (Figure 3)[8]. 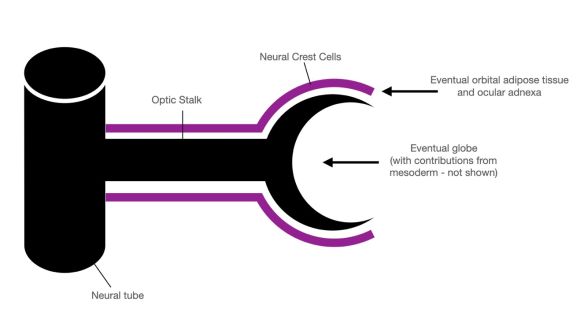 Figure 3: Migration of neural crest cells to destinations in the orbit and ocular adnexa

Once the neural crest cells have migrated to their destination, these anlagen interact with mesoderm to differentiate into adipocytes of the intraconal orbital adipose tissue and nasal fat pad, as well as the levator aponeurosis, Muller’s muscle, tarsal plate, and eyelid melanocytes[8] [12].

The isolation and characterization of orbital adipose stem cells (OASC) was first reported in 2009 (Korn). Since then, there have been multiple studies describing the similarities and differences between OASC and other types of adult human stem cells. Attention has mainly been focused on upper eyelid fat pads as these tissues are readily accessible and commonly removed during routine upper eyelid blepharoplasty.

Unique methods to optimize isolation of OASC have been described[9]. Systemic (non-orbital) adipose stem cells (ASC) can be isolated in vitro by first digesting adipose tissue with collagenase followed by centrifugation, which separates the mixture into a stromal vascular fraction (SVF) and retained cells (RC). While conventional methods of isolating ASC solely utilize the SVF, when this method is applied to OASC it leaves behind significant cell populations found in the RC after centrifugation due to the small size and basement membrane composition of OASC. Some adipocyte progenitor cells become entangled in the type IV collagen basement membrane of mature adipocytes in the RC, since collagenase does not dissolve type IV collagen. Thus, OASC should be isolated utilizing both the SVF and the RC[9].

Mesoderm-derived OASC share over 260 surface markers with bone marrow stem cells (Table 1)[14] [15]. Like other mesenchymal stem cells, OASC express characteristic markers CD90 and CD105[16] [17]. When comparing OASC to other mesenchymal stem cells such as bone marrow stem cells, OASC were found to have similar levels of a wide variety of transcription factors, proliferation and signaling genes, and other surface markers. Markers present in neuroectoderm-derived OASC include Nestin, beta-tubulin III, and Neurod1.

Several advantages exist for OASC as compared to systemic ASC. OASC have significantly higher levels of SOX2 and NANOG expression (transcription factors which indicate the ability of cells to self-renew). They have been found to have a high proliferation capacity which does not decline with patient age, unlike bone marrow stem cells, and they have been found to have increased expression of BCL2L1, an anti-apoptotic gene and decreased expression of BAX, a pro-apoptotic gene, thus suggesting a neuro-protective effect[17].

Research utilizing flow cytometry, polymerase chain reaction, and immunocytochemical staining has compared the mesenchymal stem cell marker expression in OASC derived from nasal versus central fat pads[17]. Nasal OASC were found to have higher levels of cyclin D1 compared to central OASC. When grown in normal growth media, neural gene proliferation markers Nestin and beta-tubulin III were significantly higher in nasal OASC compared to central OASC. This may be attributed to the nasal fat pad’s origins as neuroectodermal tissue rather than mesoderm. When grown in neuronal differentiation conditions, however, both nasal and medial OASC both were able to differentiate into neuroectodermal-like cells[17].

In TAO, adipogenesis and fibrosis are regulated by separate pathways from unique fibroblast phenotypes[19]. Inflammation and edema in TAO can lead to increased intraorbital pressure, from 4 mmHg in healthy orbits to up to 27 mmHg in severe TAO[19]. While both TAO fibroblasts and control fibroblasts have been shown to differentiate into adipocytes under conditions simulating increased intraorbital pressure, TAO fibroblasts also spontaneously differentiate into adipocytes, leading to adipogenesis in TAO that may be worsened by increased intraorbital pressure[19]. TAO OASC have also been found to have downregulated WNT signaling genes. WNT signaling regulates the differentiation of neural crest progenitor cells; decreased WNT signaling in TAO OASC suggests that more OASC are committed to becoming adipocytes and can lead to hypertrophy of orbital adipose tissue[18].

TAO fibroblasts have been demonstrated to have cell surface markers that more closely resemble typical mesenchymal stem cells than control fibroblasts[20]. Studies of orbital fibroblasts reveal high expression of CD90 and absence of CD45, which represents a mesenchymal stem cell-like profile (Li), as CD90 is a hallmark of mesenchymal stem cells[20]. However, there is conflicting literature regarding the expression of CD90 in TAO orbital fibroblasts[19] [21]. TAO OASC have been found to have higher adipocyte differentiation and adipogenesis capacity, and lower osteogenic and chondrogenic capacity, when compared to healthy controls[18]. While orbital adipose tissue in TAO patients, without differentiation based on origin in nasal or central fat pad, has been studied compared to healthy controls[3] [18] [22], further research is needed to differentiate the involvement of the embryologically distinct fat pads.

OASC may also play a role in corneal wound healing[23] [24]. When mixed with corneal epithelial cells, OASC may differentiate from spindle-shaped, fibroblast-like cells into round, polygonal epithelial-like cells[24]. Studies in mice with alkali-induced corneal injuries show that OASCs promoted corneal re-epithelialization and reduced corneal edema and stromal infiltration. These cells can be applied topically to the cornea to facilitate corneal healing and inhibit corneal inflammation to prevent corneal haze[15]. More recently, a study of ethanol-induced corneal wound healing in a mouse model demonstrated expedited clearance of neutrophils with application of human ASC[25]. Human OASC have also been shown to improve corneal endothelial cell proliferation and repair capacity in rabbit and monkey models[26].

Orbital adipose tissue is a complex entity with a reservoir of stem cells. The eyelid fat pads have different embryologic origins, with the upper eyelid fat pad being derived from neuroectoderm while the central fat pad is derived from mesoderm. More accessible than bone marrow cells but with similar proliferation and differentiation capacity, these cells may provide unique opportunities for further research and treatment development. The potential role of OASC as a unique stem cell repository warrants further exploration in ophthalmology and other medical specialties.