Epilepsy is a condition characterized by recurrent, unprovoked seizures, which are episodes of abnormally hypersynchronous brain activity. Seizures are classified by their onset: focal, in which only one cerebral hemisphere is affected; generalized, in which both hemispheres are affected; and unknown onset per the 2017 International League Against Epilepsy (ILAE) classification.[1] Epilepsy is categorized into four main types: focal, generalized, combined generalized and focal, and unknown.[1] Epilepsy types exist on a wide spectrum and often may present differently from person-to-person. During seizure episodes, people can experience auras, muscle jerking, automatisms, altered level of consciousness and convulsions.[1][2] Some characteristic ophthalmologic signs can also be observed including visual hallucinations, illusions, visual field loss, eye deviation, nystagmus, eyelid automatism and myoclonia.[2] These observed ophthalmologic manifestations may be seen in epilepsy and will be discussed in this article.

The cause of epilepsy has not been definitively discerned and can be broadly categorized as structural, genetic, infectious, metabolic, immune, or unknown (Table 1).[1] Etiologies are not necessarily mutually exclusive and often happen in conjunction. For example, a structural abnormality may be genetically inherited, so the etiology may be both structural and genetic.[1] Epileptogenesis is the term used to describe how epilepsy develops. Usually, epileptogenesis involves some type of neurotransmitter imbalance (GABA, glutamate) with abnormal neuronal excitation and excessive synchronization.[3] 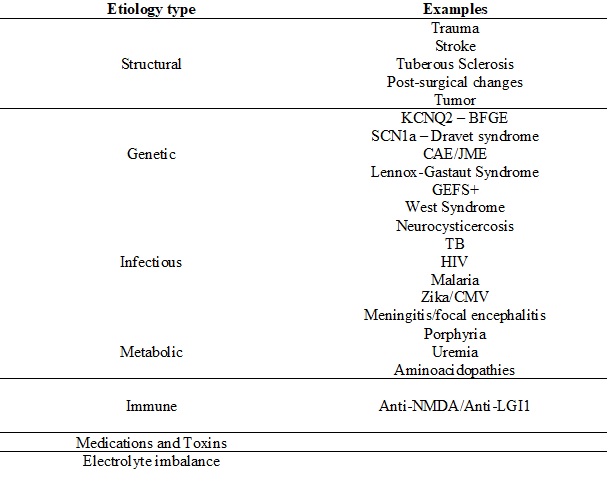 The risk factors for epilepsy can include: stroke, family history of epilepsy, head trauma, CNS infection.[6]

To make a diagnosis of epilepsy, a neurologist may do a full neurological exam, conduct blood tests, monitor EEG activity, and obtain neuroimaging (CT/MRI). 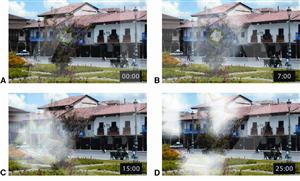 Figure 1. Visual aura. It can start as a scotoma that expands, then dissipates. Timestamps show the passage of time in minutes. Image obtained from AAO.org. 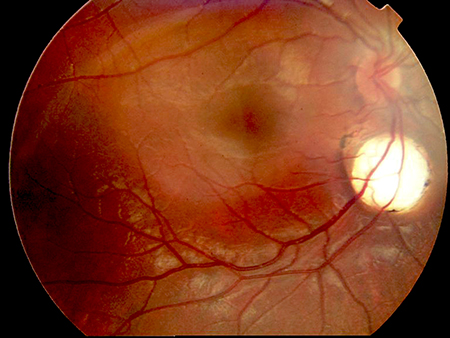 Please refer to the upcoming Eyewiki article entitled “Ophthalmic Manifestations associated with Anti-Epileptic Drugs” for further details on this topic.

Epilepsy can be treated with AED such as carbamazepine, ethosuximide, oxcarbazepine, valproate, leviracetam, and lamotrigine. Choice of drug is partially dependent on syndrome classification, and AED may not always successful in treating epilepsy.[27] Multi-drug regimen may often be employed. Recently, cannabidiol (CBD) has shown some efficacy as an adjuvant treatment in drug-resistant epilepsy and can help reduce seizure frequency.[28] Alternative treatment methods may include vagal nerve stimulation (VNS) and responsive focal cortical stimulation. VNS involves a less invasive surgery, where a device is implanted in the upper chest and cervical area that stimulates the vagus nerve in order to suppress seizure activity in the brain.[29] It can be a successful alternative to intracranial surgery.[29]Responsive focal cortical stimulation has been shown to have some success in treating medically refractory epilepsy.[30]

Epilepsy can be treated well with AED in some patients. Seizure frequency can be controlled with medications, but it may vary between patients.[27]

In patients who undergo a temporal lobectomy for their epilepsy, a homonymous hemianopsia can be observed post-surgery.[9]