Oculopalatal tremor (OPT) (also known as oculopalatal myoclonus or pharyngo-laryngo-diaphragmatic myoclonus) is an acquired syndrome of continuous and rhythmical movements of the soft palate combined with pendular nystagmus.  It occurs after injury to the brainstem or cerebellar regions. The concurrent nystagmus can be synchronous or asynchronous, and it may be seen as a convergent or pendular vertical nystagmus, or as a combination of both. When the palatal movements are seen in isolation, without an ocular component, this is simply known as palatal myoclonus.[1] [2] The most common precipitating cause of OPT is a cerebrovascular accident of the posterior circulation disrupting the dentato-rubro-thalamic tract.

OPT is a delayed complication of a brainstem lesion affecting the dentato-rubro-thalamic tract, also known as the Guillain-Mollaret triangle (see diagram below). The tract originates in the cerebellar dentate nucleus and travels to the contralateral red nucleus in the central tegmentum of the midbrain. The tract continues to the ipsilateral inferior olivary nucleus via the central tegmental tract. Damage to or disruption of any part of this tract results in secondary inferior olivary nucleus hypertrophy (IONH), forming the pacemaker of the aberrant signaling that results in OPT. Damage to the dentate nucleus results in contralateral IONH, while damage to the central tegmental tract results in ipsilateral IONH. Although IONH does not necessarily result in the occurrence of OPT, the presence of OPT always requires IONH. It should be noted that hypertrophy is a misnomer, as this phenomenon is due to pseudohypertrophy.

Although both neurons and astrocytes initially enlarge, over time the neurons become vacuolated, eventually atrophying and dying after several years.[1] [2][3] [4]  OPT can occur as early as 3 weeks and as late as 49 months after the initial insult but typically occurs within 6 to 8 months. 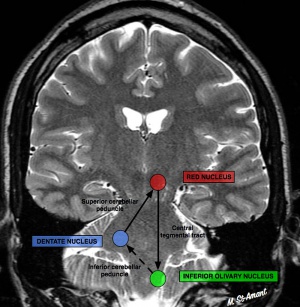 A schematic diagram of the dentate-rubro-olivary triangle (or Triangle of Guillain and Mollaret) over a coronal MRI of the brain. The dentate nucleus (blue circle) in the cerebellum sends signals along the superior cerebellar peduncle to the contralateral red nucleus (red circle) in the midbrain, which subsequently sends signals along the central tegmental tract to the inferior olivary nucleus (green circle) in the medulla. (Case courtesy of Dr Maxime St-Amant, https://radiopaedia.org. From the case https://radiopaedia.org/cases/34774).

On a cellular level, the presence of abnormal soma-somatic gap junctions and electronic coupling among inferior olive neurons is responsible for the origination of the oscillator signal. This phenomenon occurs secondary to the inciting insult and resulting cellular pseudohypertrophy of the inferior olive(s), producing irregular and abrupt signals from the inferior olivary neurons, unlike the smooth rhythmic movement of the vertical nystagmus seen in OPT. Eventually, modification of the signal leaving the injured inferior olivary neurons via their climbing fibers at the level of the cerebellum results in the smooth, rhythmic output seen in pendular nystagmus (view this link to compare other forms of nystagmus).[5] [6]

It is postulated that 2 types of OPT exist: 1) Lateral form and 2) Midline form.

It was initially thought that the lateral form is associated with unilateral IONH and the midline form with bilateral IONH; however, later studies have been equivocal and not demonstrated sufficient correlation of laterality with clinical phenotype.[3] [4]

The frequency of OPT even among brainstem stroke patients is very low, and little data exists regarding its true incidence. A retrospective review by Jang et al of 82 patients with OPT found that the average age of diagnosis was 54 years with a male tendency. The most common underlying etiology was a vascular lesion in the brain stem, accounting for 80% of cases.[7] Other potential causes include demyelination, infection, or other CNS inflammation and iatrogenic damage to the brainstem or cerebellum.

The rhythmic movements of the pharynx are most appropriately described as a tremor and are caused by regular contraction of the levator veli palatini muscle. Ocular oscillations are most commonly found to be synchronous with the palatal tremor, although asynchronous cases do occur. The oscillations typically occur at 1-3 Hz. The diagnosis of OPT requires the identification of both abnormal palatal movements and nystagmus. Occasionally ear clicks are reported, due to tremors of the tensor veli palatini. Although the palate is most often affected, movements of the eyes, facial muscles, pharynx, tongue, larynx, diaphragm, mouth of the Eustachian tube, and, rarely, of the neck, trunk, and extremities may also occur. Interestingly, the nystagmus sometimes disappears with sleep, but the palatal movements usually persist.

For video examples of this entity see the links below:

The main structural abnormality of OPT is hypertrophy of the inferior olive in the upper medulla. Olivary enlargement can often be seen on magnetic resonance imaging (MRI) several months following the initial brainstem insult as unilateral or bilateral T2 hyperintense signal of one or both inferior olivary nuclei. In many cases, MRI or computed tomography scan will identify the nature of the initial underlying lesion and will show IONH (the pimento sign).[2][9] In rare cases patients with palatal tremor have been seen to not have any MRI abnormality[10] therefore, the same could apply for Oculopalatal Tremor Histologically, the olivary nucleus has enlarged, vacuolated neurons with enlarged astrocytes.

The patients may also present with vertical binocular diplopia due to a Skew deviation, which may be present since the vestibulo-ocular pathway(VOR) is nearv Guillain−Mollaret triangle.[11]

OPT falls within the larger category of myorhythmias, which are a range of disorders characterized by slow (1-4 Hz),  repetitive, rhythmic movements occurring at rest. They include:

Myorhythmias must be differentiated from myoclonic movement disorders that originate secondary to cortical, spinal, or peripheral lesions and are characterized by erratic, faster (>7Hz), and often purposeful movements.

Oculopalatal tremor is a disorder that is difficult to treat and has shown varied responses to different types of drugs. There has been moderate success in the treatment of acquired pendular nystagmus with the use of gabapentin and memantine, but these medications have not been proven effective for the palatal tremor. The proposed mechanism of action is through blockade of N-methyl-D-aspartate (NMDA) receptors at the level of the inferior olivary nucleus, reducing synchronized firing. Trials of anticholinergics, such as trihexyphenidyl and scopolamine, have also shown moderate effectiveness; however, these drugs can cloud consciousness as well as cause drowsiness and other anti-cholinergic side effects, limiting their therapeutic efficacy. Lastly, retrobulbar botulinum toxin administration has been shown to offer temporary reprieve in certain situations; however, there are the risks of retrobulbar hemorrhage and varying degrees of external ophthalmoplegia and ptosis.[12] [13]

There is no definitive surgical intervention that has been reliably efficacious. There has been limited success with rectus muscle tenotomy or disinsertion to reduce the amplitude of nystagmus[2][13]; however, due to the rarity of OPT, there have been no surgical treatment trials undertaken to investigate efficacy of this treatment or other forms of acquired nystagmus. If there is a concomitant skew deviation with vertical deviation, then prisms may be helpful to patients.

Despite the availability of the aforementioned treatment options, OPT is usually intractable as it is often refractory to both medical and surgical interventions and spontaneous remission is uncommon. It can be a severely debilitating disease due to persistent oscillopsia, significantly handicapping individuals who suffer from it due to lifelong limitation of mobility and function.[2]