Ocular venous air embolism (OVAE) is a rare, but often fatal complication of ocular surgery. It is defined as the entry of air into the systemic venous circulation through the ocular venous circulation from a choroidal detachment or wound. This air eventually reaches the right ventricular outflow tract, causing impaired gas exchange in the lungs. This results in a sudden drop in end-tidal carbon dioxide (the level of carbon dioxide released in an exhaled breath, Figure 1), followed by signs of cardiovascular collapse during vitrectomy air infusion.[1] 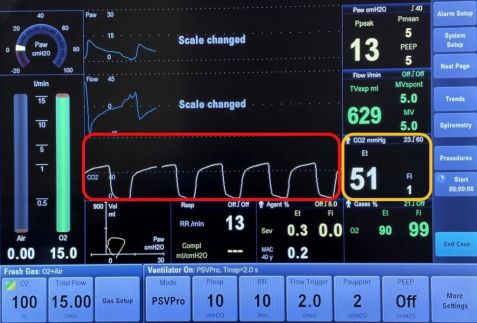 From the suprachoroidal space, the air can travel down the following pathway: vortex veins, ophthalmic veins, cavernous sinus, jugular veins, and eventually into the right atrium and ventricle. [3] Apart from vitrectomy, OVAE can also occur when air from the vitreous cavity enters intact vortex veins through large choroidal wounds which can occur secondary to trauma or choroidal melanoma resection.[2] 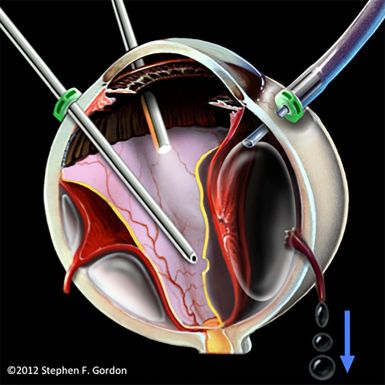 When large amounts of air enter the blood stream, the right ventricular outflow tract can become blocked. This results in impaired gas exchange in the lungs, which leads to decreased cardiac output, and secondary pulmonary hypertension, followed by systemic hypotension. This can lead to death within one minute.[2] Due to the pressurized infusion of air and the proximity of the eye to the heart, OVAE may be the most lethal of all forms of iatrogenic surgical venous air embolism (VAE).[2] Of the thirteen reported cases in the literature to date, 9 of 13 cases (69%) were fatal.[4] Of the nine fatalities, five patients died in the operating room, three others died on the same day of the event, and one patient died four weeks after the event due to multiple organ failure, despite extensive medical supportive measures.[2] Of the four patients who survived OVAE, a drop in end-tidal carbon dioxide was noted in all cases and air infusion was terminated. Appropriate medical supportive measures were applied, and only one of the four cases required extracorporeal membrane oxygenation (ECMO).[2] Detailed summaries of each of the cases can be found in a review published by Morris et al.[2]

Because of how lethal OVAE is, management begins with awareness and prevention. In pars plana vitrectomy, for example, intraoperative timeouts are important to ensure that the infusion cannula is properly placed prior to starting fluid-gas exchange.[5] It is important to ensure that the proper position is maintained throughout the fluid-gas exchange.[7] Prior to gas infusion, the surgeon should ensure that the concentration of the gas is correct.[3] Using a secured infusion cannula during combined vitrectomy and scleral buckle cases has also been recommended.[4] If during vitrectomy surgery, a progressive choroidal detachment begins to occur, the surgeon should immediately stop air or gas infusion. During procedures such as trauma repair with uveal prolapse or resection of a choroidal mass, these steps are even more critical.[7] During these high-risk cases, the use of a precordial doppler monitor may be beneficial, in addition to alerting the anesthesia team during air infusion.[7]

If VAE is suspected, the gas infusion should be terminated immediately. Supplemental oxygen (100%) should be applied.[7] The patient should be placed in the Trendelenburg position, which keeps the air within the ventricle of the heart and reduces the amount of air that enters the pulmonary circulation. Closed-chest cardiac massage, which is the application of forceful pressure on the lower sternum, may help to force air out of the pulmonary outflow tract to improve blood flow.8 Vasopressors and cardiopulmonary resuscitation may be necessary.[8] If indicated, the patient should be transferred to a hospital with ECMO capabilities, which can be lifesaving.[7]