Moyamoya disease (MMD) is a chronic occlusive cerebrovascular disorder affecting the terminal portions of the bilateral internal carotid arteries or proximal portions of the anterior and middle cerebral arteries[1][2]. The progressive ischemia results in the formation of a collateral vascular network in the base of the brain. The term “moyamoya” is a Japanese word which means a hazy puff of smoke, used to describe the abnormal appearance of the vascular network seen in angiograms of patients with MMD[3].

The incidence of MMD is highest among Japanese and Koreans, and much lower in Caucasians[3]. In 2003, the incidence of MMD was reported to be 0.54 per 100,000 in Japanese populations[4], which is ten times the incidence in North America and Europe[5]. The male to female ratio was 1:1.8, and the peak of prevalence was in the second decade in males age in the third decade for females[4]. Familial cases of MMD were reported to be 12.1%[4]. While other case reports in North America were found to be isolated and ~ 4% familial [6]

The etiology of MMD is largely unknown, but due to the higher incidence of this disease in Japanese populations and the presence of familial cases, it is thought that MMD could be a multifactor disease[3][7]. Some genetic studies of familial MMD propose that responsible genetic loci are located on chromosomes 3, 6, and 17[8][9][10]. Additionally, many cytokines such as VEGF, bFGF, and TGF-β1 have been found in MMD patients. These cytokines are associated with causing vessel narrowing and occlusion by promoting smooth muscle proliferation into the tunica intima, but it is still unknown if they are the cause of MMD[7]. It is likely that multiple factors are linked that underlie the pathophysiology of MMD.

The estimated prevalence of MMD in Japan almost doubled between 1994 to 2003, probably due to advances in neuroradiological diagnostic techniques, which helped identify new cases[4].

The two main types of symptoms in MMD are cerebral ischemia and hemorrhage. The main symptoms in children are transient ischemic attacks (TIA), which can occur repeatedly and on alternating sides because the occlusions are bilateral[3]. Headaches, involuntary motor disturbances, and seizures can also occur. In adults, intracerebral, intraventricular, or subarachnoid hemorrhages occur more frequently than ischemic symptoms[1].

Ocular manifestations in MMD are uncommon, but several case reports have described varying ocular manifestations including amaurosis fugax, central retinal artery occlusion, morning glory disc anomaly, and ocular ischemic syndrome[11][12][13][14][15]. Transient visual symptoms such as blurry vision, and field defects including homonymous hemianopsia have also been reported in patients with MMD[13][16]. Although the vascular occlusion seen in MMD is primarily associated with the anterior and middle cerebral arteries, these visual symptoms are associated with delayed stenosis of the posterior cerebral artery[16]. Visual disturbances are more likely to occur in cases with juvenile onset of MMD[17].

Several case reports document cases of amaurosis fugax in patients with MMD[2][12][15]. Amaurosis fugax is described as recurrent episodes of painless and transient loss of vision. Amaurosis fugax results from the occlusion of the internal carotid artery circulation. Thromboembolism that results from the carotid circulation in addition to hypoperfusion caused by the occlusion of the internal carotid artery are the underlying mechanisms that lead to transient vision loss[18].

Several case reports have described cases of central retinal artery occlusion (CRAO) in patients with MMD[13][19]. The central retinal artery is a branch off of the ophthalmic artery, and it supplies blood to the surface of the optic disc[20]. The artery can become obstructed due to an embolus or thrombus, vasculitis causing retinal vasculature inflammation, traumatic vessel wall damage, or spasm. The lack of oxygen to the retina often results in severe vision loss. CRAO is characterized by a cherry red spot in the center of the macula with the surrounding retina pale in color due to lack of blood flow[2]. In addition to a fundus examination, Fundus Fluorescein Angiography (FFA) can be used to diagnose CRAO by showing a delay in retinal arterial filling[13].

Despite the proximity of the central retinal artery to the ophthalmic artery, retinal vascular abnormalities rarely occur in cases of MMD as its slow progression allows for a collateral circulation to the eye to develop via the external carotid artery[19]. The disease is also more common in younger individuals whose vasculature has a greater ability to make hemodynamic adjustments to prevent arterial occlusion complications compared to older individuals. Additionally, vessel occlusion in MMD could occur distal to the bifurcation of the ophthalmic artery and thus may spare the eye[19]. 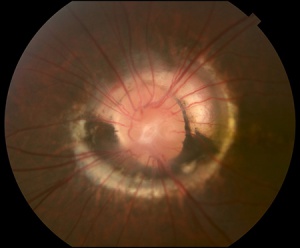 Ocular ischemic syndrome (OIS) is a condition associated with carotid artery occlusion that leads to ocular hypoperfusion. A consequence of chronic retinal and choroidal ischemia is the excessive production of vascular endothelial growth factor (VEGF)[22]. VEGF acts on epithelial cells to result in new blood vessel growth. This neovascularization occurs in the iris and at the irido-corneal angle in the anterior segment[22]. The new blood vessels are accompanied by the proliferation of a fibrovascular membrane that consists of myofibroblast cells. Myofibroblast cells contract the fibrovascular membrane which results in angle closure glaucoma. Chronic hypoperfusion to the ciliary body leads to a decrease in aqueous humor production, which can lead to a relative decrease in intraocular pressure in the anterior segment[23]. In addition to neovascular glaucoma and low intraocular pressure in the anterior segment, OIS can also result in complications such as anterior uveitis[12]. Patients with MMD are at risk of OIS due to the progressive occlusive nature of the disorder resulting in hypoperfusion of the eye[12][14].

Case reports have shown increased in superficial vascular complex(SVC) of eyes with shunts secondary to Moyamoya disease(ophthalmic artery from internal carotid artery t middle meningeal and facial fae), as seen with OCT angiography. The increased SVC resolved after bypass from the superficial temporal artery to the middle cerebral artery [24].

The clinical diagnostic criteria for MMD is based on the following angiographic findings:

When occlusions are unilateral, it is categorized as probable disease and these usually progress to involve the other side within couple of years on disease onset. Diagnosis of MMD is also possible using noninvasive modalities like MRA as opposed to conventional angiography.

Currently intracranial stenosis seen in MMD cannot be reversed. Medical and surgical treatment options are directed towards alleviating symptoms and preventing strokes and TIAs[25]. Non-surgical therapies focus on using antiplatelet agents, vasodilators, and antifibrinolytic agents to improve blood flow and prevent embolism in patients[25]. Direct and indirect revascularization surgeries can be performed to improve blood flow to the brain. Direct bypass surgery involves making an anastomosis between the superficial temporal artery to the middle cerebral artery, while indirect bypass surgery consists of placing a vascularized soft-tissue flap on the surface of the brain to promote angiogenesis[3].