Alkaptonuria (AKU) is a rare autosomal recessive aminoacidopathy of the phenylalanine/tyrosine metabolism that is caused by the absence of the homogentisic acid (HGA) 1,2-dioxidase, resulting in HGA accumulation in the body and excretion of this in the urine.[4] [5][6] Organs affected secondarily include large joints, the cardiovascular system, kidneys, skin, eyes, and various glands.[7][8][9] It was first described as a heritable entity by Sir Archibald Garrod in 1902; a disease from which he later formulated the concept of “inborn errors of metabolism."[2][4][6]

Alkaptonuria results in the classic triad of dark-colored urine, ochronosis, and ochronotic arthropathy.[10]

As Garrod originally identified, AKU has an autosomal recessive genetic trait[2][4] whose hallmark is the absence of activity of the 1,2-dioxygenase of the homogenstisic acid, enzyme located in the liver.[5] The gene responsible for this disease is located in chromosome 3 (3q2).[3]

At least 1000 affected individuals have been described in the literature; this is likely an underestimate.[11] The worldwide incidence of AKU is estimated to be between 1 in 250,000 to 1 million people. [12][13] However, it is known that Slovakia and the Dominican Republic are the two countries with the highest reported incidence of alkaptonuria, estimated to be 1 in 19,000 people. [14][15]

The principal risk factor for the presence of AKU is an affected sibling or parent. Because it is inherited in an autosomal recessive manner, there is a 50% chance of being an asymptomatic carrier, and a 25% chance of not being a carrier of the trait. [16]

AKU is a hereditary disorder that results from the absence of the homogentisate 1,2 dioxygenase enzyme, predominantly produced by liver hepatocytes, which catalyzes the breakdown of HGA, an intermediate in the tyrosine degradation pathway.

Phenylalanine is hydroxylated to tyrosine due to HGA action. In AKU this absent enzyme causes massive accumulation of HGA in collagenous tissues, especially in the nose, ear, cheek, conjunctiva, muscles insertions, cornea and sclera. 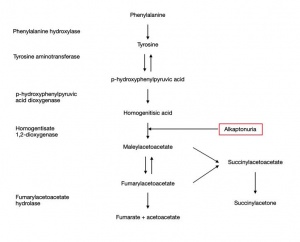 Figure 1. Alkaptonuria defect metabolic pathway. The formation of the melanin-like HGA polymer comes from an oxidative process via benzoquinone acetic acid. In alkaptonuria the homogentisic acid oxidase is absent in this disease, propitiating the HGA accumulation.

The formation of the melanin-like HGA polymer, which deposits over time in the tissues, is result of an oxidative process via the metabolism of benzoquinone acetic acid. (Figure 1)

The ochronotic pigment attachment to the connective tissue gives rise to a multisystem disorder.

Often, ocular clinic is the initial manifestation of the disease, and eye ochronosis usually presents at the average age of 30 years old. [18]

Alkaptonuria is not routinely diagnosed unless an extended newborn screening for inborn errors of metabolism is performed,[19] or a positive past medical history of dark or brown urine in the patient or relatives is brought up.[2] During the teenage years or early adulthood, the disease usually remains asymptomatic.[7][17]

Clinical findings of alkaptonuria include darkening of urine when exposed to air due to oxidation, and chronic joint pain. Patients can also be referred after black articular cartilage is noted during orthopedic surgery. [16]

Diagnostic innovations give a unique characterization of AKU as a disease. Magnetic resonance imaging can exhibit a thickening of the Achilles tendon, [36] echocardiogram can reveal severe cardiac valve calcification, stenosis or dilatation, [16][20] positron emission tomography with isotope bone scans can identify the extent of arthropathy, [37] and kidney stones can be detected through ultrasonography. [16]

Identification of bi-allelic pathogenic variants in HGDon molecular genetic testing is not required to establish the diagnosis in a proband. However, molecular genetic testing is needed in order to provide carrier testing and prenatal test result interpretation for at-risk family members. Sequence analysis of HGD gene is performed first, followed by gene-targeted deletion/duplication analysis if only one or no pathogenic variant is found. In the Slovak population, four pathogenic variants have been reported which are the cause of disease in 80% of the population(c.481G>A, c.457dup, c.808G>A, and c.1111dup). In the United States, the analysis of these variants is recommended initially, and then the sequencing of the entire gene if the cause is found. Sequencing reveals causal mutation in 90% of cases.[37]

Arthritis due to alkaptonuria resembles ankylosing spondylitis or rheumatoid arthritis, but the sparing of the sacroiliac joint differs from the former, and radiographic appearance differs from both.

Surveillance after the fourth decade of life for treatable complications is of vital importance in these patients, such as signs of heart disease, kidney stones, renal insufficiency and prostatolithiasis.

Alkaptonuria does not reduce life expectancy, nevertheless it importantly affects the quality of life of the patients if their complications are not addressed.