Anterior ischemic optic neuropathy (AION) can be arteritic (due to giant cell arteritis most commonly) or non-arteritic. Most cases of AION are classified as non-arteritic anterior ischemic optic neuropathy (NAION), which is the most common cause of acute unilateral optic neuropathy in older individuals. NAION is presumed to be due to ischemia of the anterior portion of the optic nerve, but the precise pathophysiology remains controversial. The diagnosis of NAION is usually made clinically, and typical cases present with acute, unilateral, painless loss of vision, optic disc edema, and a relative afferent pupillary defect (RAPD) that leads to optic atrophy within a few weeks[1].

Although vasculopathic risk factors (e.g., hypertension, diabetes, and systemic atherosclerosis) have been proposed as the cause of NAION, some cases remain unknown. Though hypoxia (e.g., obstructive sleep apnea) has been implicated in NAION and high-altitude environments—including air travel—may result in ischemia, the precise role of hypoxia in NAION associated with air travel remains ill-defined[2]. This EyeWiki article describes the possible role of air travel in NAION.

Two main mechanisms for the possible pathophysiology of NAION following air travel have been proposed[2][3][4]. The first and more likely mechanism is that of decreased oxygen saturation of the blood during air travel at high altitudes[3]. At higher altitudes, the partial pressure of oxygen is reduced, leading to a subsequent decrease in hemoglobin saturation of oxygen. Furthermore, the drop in oxygen availability triggers a right-shift in the hemoglobin-oxygen dissociation curve so that a decreased affinity for oxygen allows hemoglobin to rapidly release it to tissues in need[5]. Thus, travel at higher altitudes may lead to hypoxia through a decrease in oxygen saturation of hemoglobin. 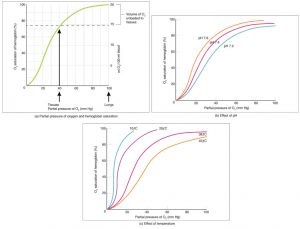 The second mechanism for NAION is through a thromboembolic event, whereby deep vein thrombi embolize and subsequently cause occlusion of the vessels supplying the optic nerve, producing ischemic optic neuropathy[3]. Formation of thrombo-emboli from the deep venous system are known to be associated with air travel; however, in order for a thrombo-embolus to trigger NAION, the formed thrombus must pass through a right-to-left shunt, such as a patent foramen ovale (PFO), to enter the arterial circulation and make its way to the short posterior ciliary vessels that supply the head of the optic nerve.

Commercial aircrafts counter the change in air pressure from lower altitudes (e.g., sea level) to higher altitudes by pressurizing their passenger cabins to equal the air pressure found at lower altitudes, known as the cabin altitude. The Federal Aviation Administration currently requires commercial aircrafts to maintain their cabin pressure equal to the pressure found at an altitude of 8,000 feet or lower (but not at sea level)[7]. The air pressure at 8,000 feet is thought to be sufficient for passengers and crew to fly comfortably without the need for supplemental oxygen. However, for a susceptible individual with vascular conditions or reductions in oxygen saturation at baseline, lower oxygen availability while flying may be a trigger for hypoxemia and thus, NAION[4].

For patients with a history of NAION in one eye, air travel in under-pressurized cabins may increase the risk of NAION in the contralateral eye[8]. Older generation aircraft and those with narrow bodies have been associated with less cabin pressurization as compared to newer generation and wider-bodied aircraft[4][8]. Additionally, cabin pressure has been shown to vary with flight duration. One study covering domestic air travel within the United States showed that flights shorter than 750 miles were associated with cabin pressures corresponding to an altitude of almost 2,000 feet lower than the cabin altitude on longer flights. If under 750 miles, the cabin altitude in these flights changed linearly based on distance, so that shorter flights had comparatively lower cabin altitudes, equating to decreased hypoxic stress[9].

The clinical findings for NAION following air travel are identical to those of NAION from any cause. These findings include: a RAPD of the affected eye; sectoral or generalized optic disc edema that progresses to optic disc pallor; visual field defects in accordance with the affected nerve fiber bundles, often altitudinal; and progression to thinning of the retinal nerve fiber layer of the site of involvement[10].

The subjective complaint typically comprises of an acute, painless, unilateral loss of vision that is variable and typically ranges from counting fingers to 20/20 but in rare occasions could even include no light perception (NLP) visual acuity[11]. The episode is not accompanied by typical symptoms and signs of giant cell arteritis, which would include scalp tenderness, headaches, jaw claudication, and high acute phase reactants such as ESR and CRP, distinguishing it from arteritic AION (AAION).

The Austin Bradford Hill criteria includes nine aspects of association that, if met, may give more weight to inferring causality of NAION resulting from significant exposure to high altitudes[16]. These criteria include strength of association, consistency, specificity, temporality, biological gradient, plausibility, coherence, experiment, and analogy. With the cases listed above, the first criteria of strength of association can be met, as altitude and subsequent development of NAION have been reported repeatedly. The diagnosis of NAION associated with high altitudes in a variety of age groups, situations, and with similar physical exam findings with either eye involvement shows consistency as well as specificity, meeting the second and third criteria. The somewhat immediate vision loss following high altitude exposure in each of the above cases suggests temporality.

With regards to a biological gradient, prior studies have suggested that longer exposure to higher altitudes likely contributes to greater hypoxemia, which is the basis for the proposed pathology[9]. The proposed pathophysiology aligns with the sixth and seventh criteria of plausibility and coherence. Experimentation, however, does rely on clear results without confounding variables, and is harder to accomplish. The final criteria of analogy may be demonstrated with comparison of high altitudes to systemic diseases such as obstructive sleep apnea, where decreased oxygen saturation puts the patient at risk, has been associated with NAION[2].

Initial diagnosis involves differentiating the etiology of the AION as arteritic or non-arteritic, as the treatment regimen for AAION includes immediate administration of systemic corticosteroids to prevent involvement of the contralateral eye[17].

Management for NAION initially involves differentiating it from AAION. Once this distinction has been made, control of vascular risk factors, such as through treatment of systemic hypertension or diabetes mellitus, is of utmost importance[1]. For the acute event and while working up to rule out AAION, steroids may be given; however, due to its side effect profile, the benefits and risks must be weighed for each individual patient to determine true efficacy[1][2]. The recommendation of high dose steroids until resolution of optic disc edema is thought to help relieve the pressure on the capillaries around the disc and allow circulation of the vessels supplying the optic nerve head[17]. However, other studies have not shown significant efficacy of this treatment in improving visual outcomes in NAION[18][19][20]. Finally, long-term use of vision aids should be used to augment any residual vision.

Recognition of the possibility of NAION following air travel in individuals with vasculopathic and other risk factors may be the key to prevention. Systemic conditions such as obstructive sleep apnea, hypertension, severe anemia, and others should be medically managed and stable prior to flights. Potential use of portable oxygen tanks for supplemental oxygen may aid in ascent and descent, as well as for any time cruising that a patient may feel distressed, especially on longer flights. As mentioned above, different types of aircraft have been associated with different cabin pressurizations. Thus, individuals at risk may choose to research their aircraft carriers prior to selecting a flight.

NAION is thought to result from vascular insufficiency to the anterior portion of the optic nerve. Patients at greatest risk often already have conditions contributing to hypoperfusion of the optic nerve, such as hypertension or obstructive sleep apnea. Air travel directly leads to decreased oxygen saturation in the blood at high altitudes despite cabin pressurization. This reduction of oxygen may contribute to ischemia of tissues, including decreased oxygen delivery to the short posterior ciliary vessels that supply the anterior portion of the optic nerve, thereby triggering NAION. Individuals with previous unilateral NAION have a 15% chance of a similar event in the contralateral eye in the next five years[21]. Although theoretically all passengers are at risk for NAION, those with this history of unilateral NAION, coupled with other underlying vascular insufficiencies, are at higher risks and should consider certain precautions if choosing to travel by air. These precautions include, but are not limited to, proper treatment of all comorbidities, use of portable oxygen tanks on flights as needed, and research of specific aircraft carriers prior to booking flights. Recognition of the association between NAION and air travel may be key in preventing the sequelae that follow.