The typical manifestations of immune checkpoint inhibitor toxicity relate to autoimmune conditions of the involved structures, due to the mechanisms of ICI predisposing to overactivation of the immune system. Pembrolizumab is the most frequently associated ICI for neuro ophthalmic manifestations (~32% of cases in a large review)[1]. Neuro ophthalmologic manifestations are uncommon and it is important to consider the possibility that the manifestation is from the underlying malignancy or other treatments.

The use of immune checkpoint inhibitors (ICI) in treatment of malignancy has increased in prominence due to increasing research showing clinical benefit in multiple different malignancy types. This form of treatment, which involves activating the individual’s own immune system to target malignant cells, can sometimes cause unique adverse effects, which primarily relate to the activation or reactivation of autoimmune diseases. It is important to note however, that neuro ophthalmic manifestations may also be a direct result of the disease, or other treatments of the disease, and this should be taken into consideration as well.

In one review of 109 patients from the literature, the overall incidence of neuro ophthalmic complications after ICI therapy was 0.46%[1]. Pembrolizumab was the most commonly associated ICI (32%), and cutaneous melanoma the most common indication for treatment (44%)[1]. Overall the rarity of neuro ophthalmic toxicities makes it challenging to further characterize risk factors / population factors that may predispose to these manifestations.

Immune checkpoints exist in the normal immune system to avoid the body mounting an immune system to self-antigens. The checkpoints exist within the lymph nodes, the ‘priming phase’, to stop activation of T lymphocytes in response to self-antigens, as well as in peripheral tissue, the ‘effector phase’, to inhibit activated T lymphocytes responding to self-cells. T lymphocytes typically have a number of costimulatory molecules that need to be stimulated before being activated, but the inhibitory checkpoint mechanism can override these and stop T cell activation[2].

Cytotoxic T-lymphocyte antigen 4 (CTLA-4) is a molecule found on T lymphocytes that can inhibit the activation of T cells. It typically binds to B7 on antigen presenting cells / dendritic cells within the lymph node. When the dendritic cell presents an antigen via a major histocompatibility complex (MHC) to a T cell receptor (TCR), this complex becomes an activating signal for the T lymphocyte. A second activating signal is the complex of B7 from the dendritic cell to the CD28 on the T cell. The combination of these two activating signals would normally lead to activation of the T cell (Figure 1a), however, the presence of a CTLA-4/B7 complex will inhibit this activation. CTLA-4 has a higher affinity and preferentially binds to B7 compared to CD28. Ipilimumab, a CTLA-4 inhibitor, will preferentially bind to the CTLA4 target on the T cell, stopping the inhibitory signal and causing activation of the T cells (Figure 1b) [2]. 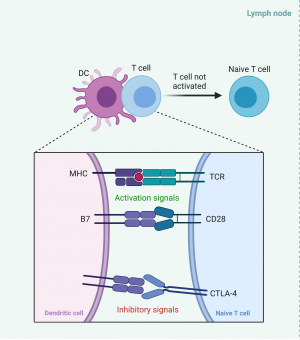 Figure 1a: Dendritic cell-T cell interaction in the lymph node with self antigen presented (immune checkpoint) – the major histocompatibility complex- T cell receptor complex and the B7/CD28 complex provide activation signals to activate the T cell, but the Cytotoxic T lymphocyte Antigen 4 (CTLA-4)/B7 complex inhibits the activation so the T cell is not activated. 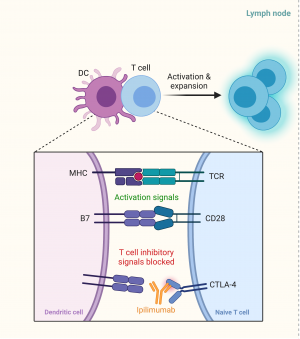 Figure 1b: The CTLA4/B7 complex has now been disrupted by the CTLA-4 inhibitor – there are now only two activating signals to the T cell with no inhibitory signals, and the T cell and immune response are activated.

The complexing of programmed death 1 (PD1) and programmed death ligand 1 in the peripheral tissues similarly serves as an inhibitory signal to the activated circulating T cells (Figure 1c). Monoclonal antibodies to either the PD1 or the PD1 ligand can act to interrupt this binding, which stops the activated T cells from being inhibited (Figure 1d) .[2]

Figure 1c: The activated T cell-cancer cell interaction in the peripheral tissue. Again the T cell receptor-major histocompatibility complex provides an activating signal for cell death, but the presence of the programmed death 1 (PD1)- programmed death ligand 1 (PDL1) complex inhibits the T cell and the cancer cell is not triggered to undergo apoptosis. 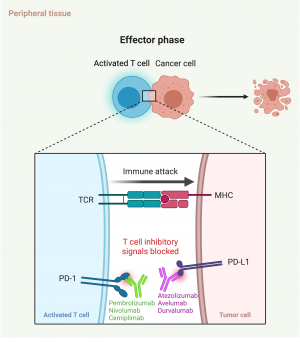 Figure 1d: The presence of either PD1 or PDL1 inhibitors (both shown in the figure) disrupts the PD1/PDL1 complex, and the tumor cell dies.

Because of the two different binding complexes, CTLA-4 inhibitors can be used in conjunction with PD-1 inhibitors to improve efficacy of cancer treatment[3].

To date, there are 7 approved immune checkpoint inhibitors, targeting these 3 different molecules, as shown in the table below.

Because the aim of all of these agents is to activate the immune system, adverse effects are primarily related to overactivation of autoimmunity, which leads to multiple autoimmune manifestations (Figure 2). 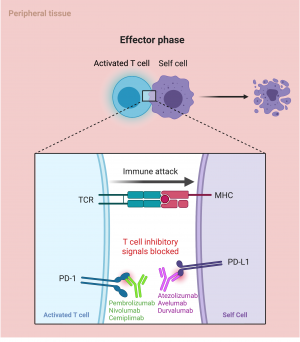 Figure 2: The PD1/PDL1 inhibitors may also cause disruption of the PD1/PDL1 complex in self cells, leading to T cell attack and self cell lysis, the basis for immune related adverse events in immune checkpoint inhibitors.

Multiple neuro ophthalmic manifestations have been reported in the literature, and are described below:

Orbital inflammatory syndrome refers to inflammatory diseases within the orbit, orbital apex, and the cavernous sinus. It is typically associated with autoimmune diseases, like most ICI complications. Clinical symptoms depend on the anatomic structures involved, which may include features of optic neuropathy (visual acuity loss, dyschromatopsia), eye pain, diplopia, proptosis. Examination findings may include features of optic neuropathy (decreased visual acuity, poor color vision, RAPD, optic disc edema), as well as ophthalmoplegia and proptosis. MRI will often be abnormal, with gadolinium enhancement in the affected regions. Orbital inflammatory syndromes have been described in isolated reports with multiple ICI[1].

A meta-analysis of genetic polymorphisms found an association between the CTLA-4 +49A/G and TED. This could suggest a mechanism in which this disease is more prevalent in ICI, especially those with CTLA-4 targets[15]. Cases of TED have been seen in ipilimumab, pembrolizumab, and nivolumab[1].

Temporal arteritis is a large vessel vasculitis, with typical manifestations including temporal artery tenderness, jaw claudication, and vision loss (either transient or permanent). Other manifestations may relate to other large vessels affected, including aortitis, and ischemic stroke. Examination findings are dependent on the vessels affected, and may include features of optic neuropathy (decreased visual acuity, RAPD, optic disc edema), diplopia, temporal artery tenderness, or a weaker / absent temporal artery, or features of an ischemic stroke. ICI associated GCA has been reported with ipilimumab, nivolumab, and pembrolizumab, including some that are biopsy proven[1][16].

Myasthenia gravis (MG) is a systemic autoimmune disease of the neuromuscular junction, which typically presents with variable weakness and fatigue involving one or multiple systems. Ophthalmic manifestations may be related to purely ocular MG, or ocular features of generalized MG, and symptoms typically include painless and variable diplopia, ptosis, and / or ophthalmoplegia. Findings on examination may include a variable ptosis, Cogan’s lid twitch, and pseudo-retraction of the eyelid.

Cases of ICI associated ocular myasthenia gravis are yet to be reported in the literature, but large series of ICI associated generalized myasthenia gravis have noted an approximate prevalence of 0.24%, mostly associated with PD1 inhibitors[1] [17]. In the series, ptosis occurred in 75% of patients, and diplopia in 42% [17]. Median time to symptom onset was 29 days, although the longest case was noted 3 months after the last dose of ICI[1]

The Common Terminology Criteria for Adverse Events (CTCAE) Version 5, published by the US Department of Health and Human Services has four grades for patients with ocular toxicity from medications[18]:

Grade 1: Mild toxicity (patients may be asymptomatic, but have clinically detectable findings)

Grade 2: Moderately symptomatic, which may interfere with ADLs and with visual acuity of 20/40 or better (or loss of 3 lines or fewer from baseline)

Grade 3: Decrease in vision (worse than 20/40, or more than 3 lines decreased from baseline, but better than 20/200), limiting activities of daily living, severe pain, and visual field defects

Grade 4: Visual acuity equivalent to or worse than 20/200

There are currently no formal treatment recommendations for neuro ophthalmic complications associated with ICIs. The Society for Immunotherapy of Cancer (SITC) Toxicity Management Working Group has suggested general guidelines for management of immune related adverse events by grade[13]:

Grade 1: Typically do not require corticosteroid administration or cessation of ICI.

Grade 2: Might consider temporary suspension of ICI and initiation of systemic corticosteroids (either intravenous or oral). Consider resuming ICI once symptoms have improved to grade 1.

Grade 3: Warrant consideration of suspension of ICI and cessation if symptoms haven’t resolved within 4 – 6 weeks, as well as systemic steroids.

A review of the literature noted that 62% of patients had their ICI discontinued due to the neuro ophthalmic complication[1]. In general, a risk: benefit analysis is required to ascertain the severity of the toxicity, in comparison to the benefit of the ICI, available alternative malignancy treatments, as well as the long term prognosis of the patient. Ocular adverse effects also rarely occur in isolation, and typically systemic adverse effects will also occur, making the decision to alter therapy likely to be multifactorial, and not always solely based on the specific ocular pathology[19].

The accepted treatments for the ocular condition when occurring separate to ICI administration are typically also considered for the respective ICI associated toxicity as well.

Standard treatment for optic neuritis includes high dose corticosteroids, often followed by a rapid taper. Most (10 out of 11) patients in the largest review of ICI associated optic neuritis had their ICI ceased and received corticosteroids. Of the 16 eyes with poor visual acuity at onset of presentation, post-treatment vision improved, stabilized, and deteriorated in 12, 2, and 2 patients, respectively[11]. NAION management typically involves management of cardiovascular risk factors, and consideration of antiplatelet therapy.

Corticosteroids are typically used, and specific treatment of the underlying cause is recommended (if identified). In patients with ICI associated orbital inflammatory syndrome, most patients have required systemic corticosteroids, and then typically additional therapies, including intravenous immunoglobulin, methotrexate, plasmapheresis, mycophenolate[1].

Treatment of TED can involve non-steroidal anti-inflammatory agents (NSAIDs), steroids, other immunosuppressive medications, or teprotumumab, a recently approved monoclonal antibody against insulin growth like factor [1]. Treatment typically depends on severity of symptoms, and will often start with the generally most tolerated medications (i.e. NSAIDs). Within the literature, most patients were treated with ICI associated TED were treated with systemic corticosteroids, although in this subgroup of patients, the risk/benefit profile of NSAIDs might be different, given higher risk of renal impairment, antiplatelet / anticoagulation / other contraindications to NSAID use1[1].

Standard treatment for suspected GCA involves urgent commencement of high dose corticosteroids as soon as the diagnosis is suspected. Given the significant morbidity associated with giant cell arteritis in the general population, all patients in the literature have been treated with systemic corticosteroids when this diagnosis was suspected / confirmed in association with ICI[16].

Standard treatment for myasthenia gravis is composed of acetylcholinesterase inhibitors (e.g. Pyridostigmine), as well as immunosuppressive therapies (mycophenolate, azathioprine, intravenous immunoglobulin, plasmapheresis). These two treatments domains are similar to what has been offered to patients with ICI-associated myasthenia gravis, although the longer term immunosuppressive agents are more frequently intravenous medication (corticosteroids, intravenous immunoglobulin, plasmapheresis). It should be noted that given the multi system involvement in myasthenia gravis, it is more likely the other system manifestations that would prompt discontinuation or suspension[1][17].

Because of the relative infrequency of these toxicities, overall long term complications and prognosis are unknown. Some advocate routine ophthalmological examination every 4 – 6 months due to the possibility of ocular toxicities, however, given that specific treatment is not typically recommended for asymptomatic patients or grade 1 toxicities, this may not be of additional yield to the patient[20].