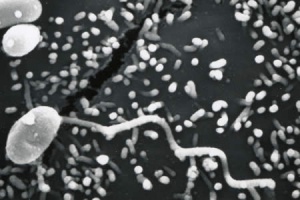 Microsporidia are obligate intracellular, spore-forming parasitic fungi. They are capable of infecting many species of animals. In humans, they can infect many organs, including the eye. They are widely distributed around the world and are considered an emerging cause of infectious disease, especially in immunocompromised patient populations.

Microsporidia is a phylum of microorganisms consisting of roughly 1200 species capable of infecting many different animals, particularly fish and insects. 15 species have been associated with infections in humans. These include Anncaliia (formerly Barachiola) algerae, A. connori, A. vesicularum, Encephalitozoon cuniculi, E. hellem, E. intestinalis, Enterocytozoon biuneusi, Mircosporidium ceylonensis, M. africanum, Nosema ocularum, Pleistophora spp., Trachipleistophora hominis, T anthropophthera, Vittaforma corneae, and Tubulinosema acridophagus. E. cuniculi, E. intestinalis, and E. bieneusi have been found in some domestic and wild animals while E. hellem has been detected in birds. E. bieneusi and V. corneae species have been associated with human infection.

In recent decades microsporidia have attracted greater attention due to their association with persistent diarrhea and systemic disease in patients with AIDS.[3] Increased awareness and developments in genetic technology have allowed multiple species of pathogenic microsporidia to be better classified and studied.[4]

Microsporidia are obligate intracellular parasitic fungi, initially classified as protozoa.[5] Microsporidia lack typical mitochondria, thus they were initially considered to have branched prior to the endosymbiotic development of mitochondria on the evolutionary tree. This has been questioned as genetic sequencing has revealed genes coding for mitochondrial proteins and further identification of what is thought to be mitochondrial remnants within the cell ultrastructure. The complete gene sequencing of the microsporidial species Encephalitozoon cuniculi has provided significant evidence supporting the hypothesis that microsporidia are exquisitely specialized, atypical fungi that have evolutionarily lost their mitochondria while retaining mitochondria-derived organelles, referred to as mitosomes.[6][7][8] The environmentally resistant spore is the infective form of microsporidia. Infection of the host cell is achieved through the use of a specialized, coiled organelle unique to microsporidia, called the polar tubule. This structure can be demonstrated on ultrastructure visualization of the spores. Osmotic pressure changes within the spore cause the polar tube, or polar filament, to evert and extend towards the eukaryotic host cell followed by transfer of the microsporidia cellular contents (sporoplasm). Once occupying the host, the parasitic microsporidia replicates intracellularly, filling the cytoplasm. Eventually, once the spores have reached maturity, the host cell lyses and releases them into their surroundings.[4]

First identified in HIV-1 infection in the setting of chronic diarrhea, microsporidia have since been discovered to cause a variety of systemic and ocular infections in both immunocompromised and immunocompetent individuals.

The first well documented case of ocular involvement in humans was in 1973 when Ashton and Wirashina described an 11 year old boy with stromal keratitis caused by microsporidia.[9] In general, there are two fairly distinct clinical presentations of ocular microsporidiosis. Stromal keratitis is characteristic of infection in healthy individuals while immunocompromised, most notably AIDS patients, more often develop keratoconjunctivitis and epithelial keratopathy. However, presentation is variable and may include anterior or midstromal infiltration, anterior uveitis, or even gross corneal necrosis and perforation.

Presenting acuity ranges from 20/20 to 20/100, often with no loss of acuity after disease resolution. Symptoms generally include redness, foreign-body sensation, decreased visual acuity, and photophobia. Atypical, punctate epithelial keratitis associated with conjunctivitis can also occur in healthy individuals with satisfactory treatment outcomes. One study of 4822 patients with microbial keratitis in India, found 19 (0.4%) of them to be proven microsporidial keratitis. Multifocal, course, punctate, raised epithelial lesions were noted in all of these patients. All cases also demonstrated mild to moderate nonpurulent conjunctivitis, often with papillary and/or follicular reactions.[10][11] Epithelial changes may evolve into a central nummular or disciform keratitis before resolution.[12] One study has also documented diffuse endothiliitis with corneal edema and limbitis as additional clinical features of infection which resolved with topical steroid treatment.[12]

Transmission is unclear. Microsporidia may remain in a latent state within a host and reactivation may occur during times of immune compromise. Transmission may be possible from hosts unaware that they are harboring microsporidia. A case of microsporidial keratoconjunctivitis being transmitted via donor corneal graft has been reported, lending support to this possibility.[13] Microsporidiosis is being reported with more frequency in solid organ transplant recipients. Yet it remains unclear if infection is transferred by the donor tissue or acquired by the host during the following period of immune suppression.[14] 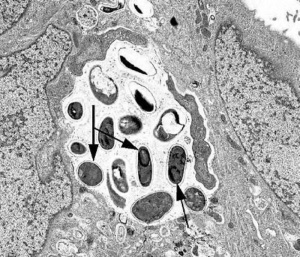 The gold standard for identification of microsporidia is transmission electron microscopy (TEM). TEM may also be used to identify the species of a particular organism. However, TEM is not broadly available and is impractical for routine diagnosis. It is also cost prohibitive and time consuming.[16] 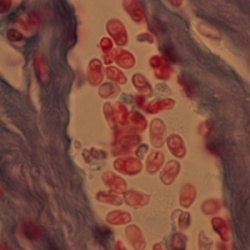 There are many histochemical methods for diagnosis through examination of fluid specimens (urine, feces, mucus, etc.) in disseminated infections. Fluorescent brighteners, such as Calcofluor white, may be used to target the chitinous spore wall. Modified (concentrated) trichrome stain can also be utilized alone or in combination with Gram stain or Warthin-Starry silver stain for identification of organisms.[16][12] The Chromotrope 2R method is a widely used staining technique which will stain the spore wall a bright red, often with a circumferential stripe, resembling a belt that also stains pink-red. This method can take approximately 90 minutes to perform and a “Quick-Hot Gram Chromotrope technique” has been devised, staining in under 10 minutes with adequate color contrast. These spores are stained dark violet and also demonstrate the darker central band. The microsporidial spores associated with human infection measure from 1 to 4 µm depending on the species.[16] KOH preparation with corneal scrapings have also been performed to identify microsporidia with 1% acid-fast staining used as a confirmatory method.[10][11]

IFAs are available for microsporidia using monoclonal and/or polyclonal antibodies.[16]

The source of infection remains uncertain, but the human infective genotypes have been identified in domestic, farm, and wild animals, inferring possible zoonotic etiology.[22] There remains a strong association with soil exposure, contact lens wear, and topical steroid treatment in ocular infections.[12]

Identification of microsporidia in water sources has led to their inclusion in the Environmental Protection Agency’s (EPA) Contaminant Candidate List 2,[23] as well as classification by the National Institutes of Health (NIH) as Category B biodefense pathogens.[24]

A variety of possible treatment methods have been described to treat microsporidial keratitis. In immunocompetent patients, microsporidial keratoconjunctivitis can be a self limited disease and many cases will resolve without treatment. [25]In patients who are immunocompromised due to HIV, reconstitution of their immune status through antiretroviral medications has been associated with resolution of clinical symptoms.[4] Aspartyl protease inhibitors of HIV have also been documented to directly inhibit the growth of Encephalitozoon intestinalis in tissue culture.[26] Albendazole, which inhibits microtubule assembly, is also affective against several microsporidia, including Encephalitozoon spp. in systemic disease.[27] Systemic antifungals have also been used to manage microsporidal infections in AIDS patients.[28]

Fumagillin, an antibiotic and antiangiogenic agent derived from Aspergillus fumigatus, has been found to be effective against Encephalitozoon sp. and Enterocytozoon bieneusi. While toxic in systemic administration, topical use has been shown to be well tolerated and effective in treating keratoconjunctivitis.[29]

A 2021 case report described the successful use of topical voriconazole and oral albendazole to treat a case of microsporidial stromal keratitis.[30]

Epithelial debridement has been found to be successful in curing disease confined to the epithelium. [25]

Medical management may be long term and recurrence can occur following treatment discontinuation. In cases of severe corneal thinning and necrosis, penetrating keratoplasty may be the only reliable treatment method.[31]