Midface/Malar Descent results from age related changes in the skeletal and soft tissue structures of the midface region. Particularly, the effects of gravity and repeated facial expressions can weaken the ligaments in the malar region, which can lead to the vertical descent of the malar fat pad which can contribute to lower eyelid retraction, tear trough deformities, deepened nasolabial folds, and volume loss accompanied with a tired appearance.

General Anatomy of Midface Malar region: When discussing physical characteristics arising from malar descent, it is important to understand the anatomy of the lower eyelid and cheek. There are two anatomical regions that are responsible for providing structural support, including the junction between the eyelid and cheek, as well as the midcheek. More specifically, the lid-cheek junction is located at the orbital rim, where the orbitalmalar ligament is visualized. It should be noted that the orbitalmalar ligament provides the separation between the lower eyelid and malar eminence, and is marked as the upper border where festoons generally develop[1]. Conversely, the lower border is within the midcheek, including both the malar septum and zygomaticocutaneous ligament where festoons often develop[1]. The malar septum spans the region between the inferior orbital rim to where it inserts within the midcheek dermis. Underneath this region is supported by the zygomaticocutaneous ligament. Lastly, preperiosteal fat and suborbicularis oculi fat make up the two layers of fat within the prezygomatic space (Figure 1 and Figure 2). 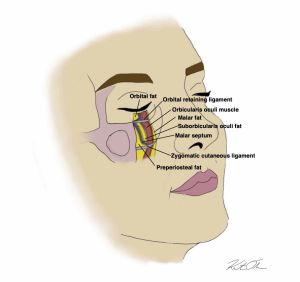 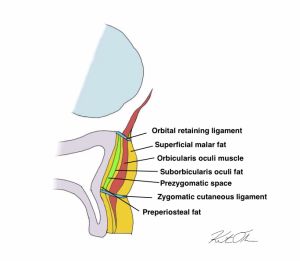 The aging process induces notable changes in the soft tissue, skin, and skeletal structures within the midface region.[2] Gravitational effects and repeated facial expressions weaken the ligaments in the region, including the orbicularis retaining ligaments and zygomaticocutaneous ligament [2],[3],[4]. These changes lead to a vertical descent of the malar fat pad, the suborbicularis oculi fat (SOOF) pad, and the lower eyelid [2]. The descent of the midface tissues can lead to shortening of the anterior lamellae (skin and orbicularis muscle) of the lower eyelid, resulting in lower eyelid retraction. Moreover, a descending malar fat pad that pulls on the lateral canthal tendon can cause round eye and scleral show [5].

Atrophy of the SOOF and malar fat pads also accompany this vertical descent[2]. These processes can contribute to the following changes to facial volume and physical appearance:

Midface/Malar Descent results from age related changes in the skeletal and soft tissue structures of the midface region. Particularly, the effects of gravity and repeated facial expressions can weaken the ligaments in the malar region, which can lead to the vertical descent of the malar fat pad which can contribute to lower eyelid retraction, tear trough deformities, deepened nasolabial folds, and volume loss accompanied with a tired appearance.

The treatment for malar descent is highly variable due to differences in the severity of descent and preferences of patients.

Midface elevation surgery, or midface lift, is a broad term that encompasses surgical interventions that primarily aim to correct descent of the midface. Midface elevation typically involves redraping tissues and release of retaining ligaments, which include the orbicularis retaining ligament (ORL), zygomaticocutaneous ligament (ZCL), and malar septum (MS).[7] In addition to correcting descent of the midface, the midface lift can also be a useful adjunct in correcting lower eyelid malpositions. Midface elevation surgery is appropriate for lower eyelid ectropion and retraction caused by shortening of the anterior lamella, which could be a result of aging-related midface descent, skin removal during a previous blepharoplasty, tumor resection, or a heavy midface due to paralysis. A midface lift can allow for the repositioning of skin and orbicularis muscle to the eyelid, leading to better eyelid position[8] . A midface lift may be performed in conjunction with a canthoplexy/canthoplasty to improve eyelid positioning and tension[5]. There is variation in the initial point of incision, with the most common incision points including temporal, buccal sulcus, transconjunctival, and subciliary incisions. Subperiosteal midface elevation can correct midface descent in patients with moderate to severe midface ptosis. One approach to the subperiosteal midface lift uses a temporal incision to access the midface structures, and the arcus marginalis, periosteal attachments to the zygomatic arch, zygomaticus major and minor muscular attachments are released. Then, midface soft tissues are suspended and sutured to the temporalis fascia.[2] Alternatively, supraperiosteal elevation is utilized for patients with mild to moderate midface ptosis and involves a more superficial dissection than the other techniques. Additional surgical approaches include the transblepharoplasty midface lift and extended blepharoplasty, which are appropriate for moderate to severe midface descent [7].

Treatment for Midface/Malar descent can reduce the lower eyelid retraction and age-related appearance of a patient, with excellent prognosis and minimal complications. In a retrospective study of 199 patients that underwent midface lifting, improvement in eyelid retraction was observed in 97.9% of cases in both functional and aesthetic terms. There was a reduction in excessive tearing, blurred vision, ocular discomfort, redness, burning, and photophobia in the majority of patients 12 months after surgery [5]. Another retrospective study of subperiosteal midface lift outcomes in 34 patients found that the surgery is effective in improving lower eyelid position and lagophthalmos[11]. As with other eyelid surgeries, patients may not be completely satisfied with the procedure results and require another surgery to further correct the malar descent. In one study citing the re-elevation rates of 472 patients following malar fat pad elevation, 14 patients underwent a second elevation surgery. The indicators for re-elevation included malar fat pad asymmetry, malar fat pad malposition, and nasolabial asymmetry. Following the second elevation surgery (which included SMAS procedures combined with other operations), the re-elevating of the fat pad was successfully achieved with minimal complications[12]. It is important for physicians and patients to express questions regarding the benefits of the surgery and the expected results. Midface elevation does not change upper brow and eyelid appearance nor replace volume augmentation, and although symmetry is the goal, patients should expect asymmetry due to congenital differences in skeletal and soft tissue structures [12]. By managing both patient expectations and treatment limitations, treatment for malar descent can be gratifying for both the patient and physician.

Midface/Malar Descent results from age related changes in the skeletal and soft tissue structures of the midface region. Particularly, the effects of gravity and repeated facial expressions can weaken the ligaments in the malar region, which can lead to the vertical descent of the malar fat pad which can contribute to lower eyelid retraction, tear trough deformities, deepened nasolabial folds, and volume loss accompanied with a tired appearance. Treatment for descent of the malar fat pad and associated lower eyelid retraction depends on its severity, with surgical management including subperiosteal midface elevation, supraperiosteal midface elevation, and transblepharoplasty midface lift. Overall treatment for malar descent has an excellent prognosis, however complications can include edema, asymmetry, and malposition.