A macular hole (MH) is a retinal break commonly involving the fovea.

Different findings can be observed depending the stage of the MH. Residual cortical vitreous, retinal glial, and retinal pigment epithelial cells are often found on the retinal surface. They are thought to cause tangential traction on the fovea. Cystoid edema in the outer plexiform and inner nuclear layers and thinning of the photoreceptor layer can also be observed.

It has been hypothesized that MHs are caused by tangential traction as well as anterior posterior vitreoretinal traction of the posterior hyaloid on the parafovea. MHs are noted to be a complication of a posterior vitreous detachment (PVD) at its earliest stages.

There are no preventative measures for idiopathic MHs. Pars plana vitrectomy has not been clearly demonstrated to be effective in preventing MH formation.

This is a clinical diagnosis based on history and clinical exam, including slit lamp and dilated fundus examination. In some cases, optical coherence tomography (OCT) is useful in the diagnosis and management of this condition. It is important to distinguish between a full-thickness macular hole versus a lamellar hole (irregular foveal contour with defect in the inner fovea) or pseudohole (an irregular foveal contour with steep edges without true absence of retinal tissue often associated with an epiretinal membrane).

Patients with MHs typically present over the age of 60 and females are more frequently affected. Idiopathic MH occur with an estimated incidence of 8.69 eyes per 100,000 population per year in one study[1]. A careful history should be obtained to investigate for any of the risk factors mentioned above.

Slit lamp examination with special attention to the macula is important in the evaluation of this disorder (Figure 1). The Watzke-Allen sign can be used as a clinical test in cases of a suspected full thickness macular hole by shining a thin beam of light over the area of interest. The patient would perceive a “break” in the slit beam in cases of a positive test.

Careful examination of the fellow eye is also recommended given that MHs are bilateral in up to 30% of patients.[2] Special attention should be paid to the vitreoretinal interface, involutional macular thinning, and retinal pigment epithelial window defects because these are risk factors for MH development in the fellow eye. Patients without a PVD in the fellow eye have an intermediate risk (up to 28%) of developing a MH[3], whereas patients with a PVD are at low risk for developing a MH.

Depending on the stage of the MH, a subfoveal lipofuscin-color spot or ring can be noted. In more advanced cases, a partial or full-thickness macular break is observed.

Metamorphopsia (distortion of the central vision), central visual loss, or central scotoma can be reported.

There are two main classification schemes for macular holes. Gass first described his clinical observations on the evolution of a macular hole[4]: 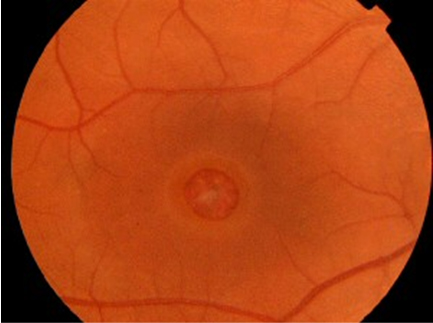 Figure 1: Clinical photo demonstrating a full thickness macular hole with a grayish macular rim suggestive of subretinal fluid. Note the retinal pigment epithelial changes at the base of the hole.

Figure 2: Optical coherence tomography image of a macular hole with an overlying operculum. The classic “anvil-shaped” deformity of the edges of the retina is noted due to intraretinal edema.

Fluorescein angiography demonstrates a hyperfluorescence pattern consistent with a transmission defect due to loss of xanthophyll at base of the MH. This study is not usually necessary for diagnosis or management.

However, OCT is the gold standard in the diagnosis and management of this disorder. This high-resolution image can allow evaluation of the macula in cross-section and three-dimensionally. OCT can be helpful detecting subtle MHs as well as staging obvious ones.

OCT can also help guide management. OCT can assist in the determination of whether there is an associated epiretinal membrane or if the posterior hyaloid is still attached or not, which can be critical in deciding on the surgical approach. It can also be used to aid in gauging the prognosis of the fellow eye.

No laboratory tests are indicated in cases of idiopathic MHs.

The clinical appearance of a MH is fairly distinctive. However, epiretinal membrane with a pseudohole, lamellar hole, and vitreomacular traction must also be considered. Cystoid macular edema, subfoveal drusen, central serous chorioretinopathy, or adult vitelliform macular dystrophy are also in the differential diagnosis of a stage 1 MH.

The clinical stage and duration of the MH is the most important issue in the management of this entity.

In general, most Stage 1 MH can be followed conservatively given approximately 50% chance of spontaneous closure[6]. However, if the patient has symptomatic VMT or even a full-thickness macular hole with associated VMT, some may consider one of the following treatment options:

Regardless of which treatment is pursued, the patient should be followed regularly. If the patient has an expansile gas placed in the eye, face-down positioning is often recommended for a short period of time, and it is important to remind the patient that he/she cannot fly or be at an elevation >2,500 feet until the gas dissipates.

Surgery involves a pars plana vitrectomy procedure with tamponade. This can be done with or without peeling of the internal limiting membrane. A number of different instruments can be used to facilitate removal including intraocular forceps, pick, diamond dusted instruments, as well as other instruments. ICG green, Brilliant Blue, or triamcinolone acetonide are commonly used stains to assist in identifying the internal limiting membrane.

Surgical technique has been debated for many years. While most vitreoretinal surgeons agree that tamponade is important, the type of tamponade and duration of postoperative positioning is debated. The importance of peeling the internal limiting membrane with or without staining has also been debated. More recently, new techniques including placing ILM flaps, neurosensory retinal grafts, amniotic membrane, platelet-rich plasma, autologous serum, or even lens capsule into larger holes have been reported with success[10][11][12][13][14].

The follow up is similar for most eyes following pars plana vitrectomy surgery. It is important that patients understand the importance of postoperative positioning. While the duration of positioning has been debated, most vitreoretinal surgeons advise positioning to improve the rate of hole closure. Visual acuity improvement does not occur immediately in some patients. Visual improvement seems to be dependent on preoperative characteristics, duration of the MH, as well as other factors.

The complications are similar to all eyes undergoing pars plana vitrectomy. In particular, these patients are at a higher risk for retinal tear and detachment. The vitreous is the most adherent to the optic nerve, macula, and vitreous base. Patients with macular holes may inherently have an abnormal vitreoretinal interface, and thus, during certain portions of vitrectomy, may have a higher risk for development of retinal tears or retinal detachment.