Lymphocytic choriomeningitis virus (LCMV) is a RNA virus that causes aseptic meningitis when it is acquired, and chorioretinitis and other devastating neurologic sequelae in the congenital form.

Lymphocytic Choriomeningitis Virus (LCMV) is a single-stranded RNA arenavirus that is endemic in rodents. Human infection likely occurs by contact with infected rodents or their excretions (saliva, urine, nesting material, and droppings) through inoculation of contaminated materials into broken skin, via the eyes or mouth . [1]The common house mouse, Mus musculus, is both the natural host and reservoir for the virus, which is spread via vertical transmission.

Most infections in humans likely go unrecognized and are instead attributed to the flu, on occasion they can have aseptic meningitis or encephalitis. The prevalence of LCMV infection has been estimated to be between 2-5%, with higher prevalence in humans living in extreme poverty. [2] Most infections occur in the fall and winter, indicative of the time mice move into homes.[3]

Women who become infected with LCMV during pregnancy may pass the infection on to the fetus. Infections occurring during the first trimester may result in fetal death and pregnancy termination, while in the second and third trimesters, birth defects can develop. Infants infected In utero can have many serious and permanent birth defects, including chorioretinitis, mental retardation, hearing loss, intracerebral calcification, macro or micro-cephaly, and hydrocephaly.

Both acquired and congenital LCMV diseases are a result of both the infection and the host response to the infection.

The virus is transmitted in an aerosolized form and deposited into the lung parenchyma and enters the blood stream and travels to other organs. LCMV demonstrates a tropism towards neuroblasts and ultimately replicates in the meninges, choroid plexus, and ventricular ependymal linings. The virus continues to replicate and causes the symptoms of aseptic meningitis. [4] Tissue inflammation from the host immune response is the cause of the disease symptoms.[5] Human-human transmission has not been documented, except in the case of infected organ transplantation. [6]

Congenital LCMV is the result of vertical transmission, most often trans placentally, though rarely a fetus may acquire the infection intrapartum. Neuropathologic studies have demonstrated that mononuclear cell infiltrates in the meninges, choroid plexus, and ependymal cells. The inflammatory response is largely driven by T-cells. [7] Either macrocephaly or microcephaly commonly occurs in neonates. Macrocephaly is typically a result of inflammation at the cerebral aqueduct blocking the ventricular system. Microcephaly is usually the result of immune-mediated destruction of brain tissue as well as the virus mediated failure of brain tissue. [8][5]

A dilated fundus examination with scleral depression is recommended. The patients are usually children in their early years of life, sent for ocular examination due to clinical suspicion of congenital TORCH infection.

Acquired LCMV infection is typically a biphasic disease. Roughly one-third of patients are asymptomatic or have mild symptoms. Symptoms of acquired LCMV infection include fever, headache, nausea/vomiting, sore throat, malaise, myalgia, and cough. In the second phase of infection, there is likely neurologic manifestations of the disease which are characteristic of aseptic meningitis. The entire clinical course is typically one to three weeks. Patients who acquire the disease through solid organ transplantation or pregnant women typically will have a more severe disease course. [6]

Around 10% of patients with aseptic meningitis in a study of hospitalized had been infected with LCMV [12] and was more commonly seen in pre-1960 era. It is rare to see an LCMV infection in present time. Transverse myelitis, Guillan-Barré syndrome, and hydrocephalus have been noted in these patients. [13]

There can be abnormal lab values which include leukopenia, transaminitis, thrombocytopenia. In addition, there are infiltrates seen in the lung on chest X-ray or chest CT. Cerebrospinal fluid (CSF) analysis will reveal CSF pleocytosis (unusual in other viral infections). Eosinophila in the CSF fluid has also been noted, along with decreased glucose and elevated protein concentrations in the CSF. [14]

Congenital LCMV is more likely to have neurologic and ocular manifestations rather than other systemic disease. In pregnant women, the infection can result in abortion, neonatal meningitis, or the following signs. 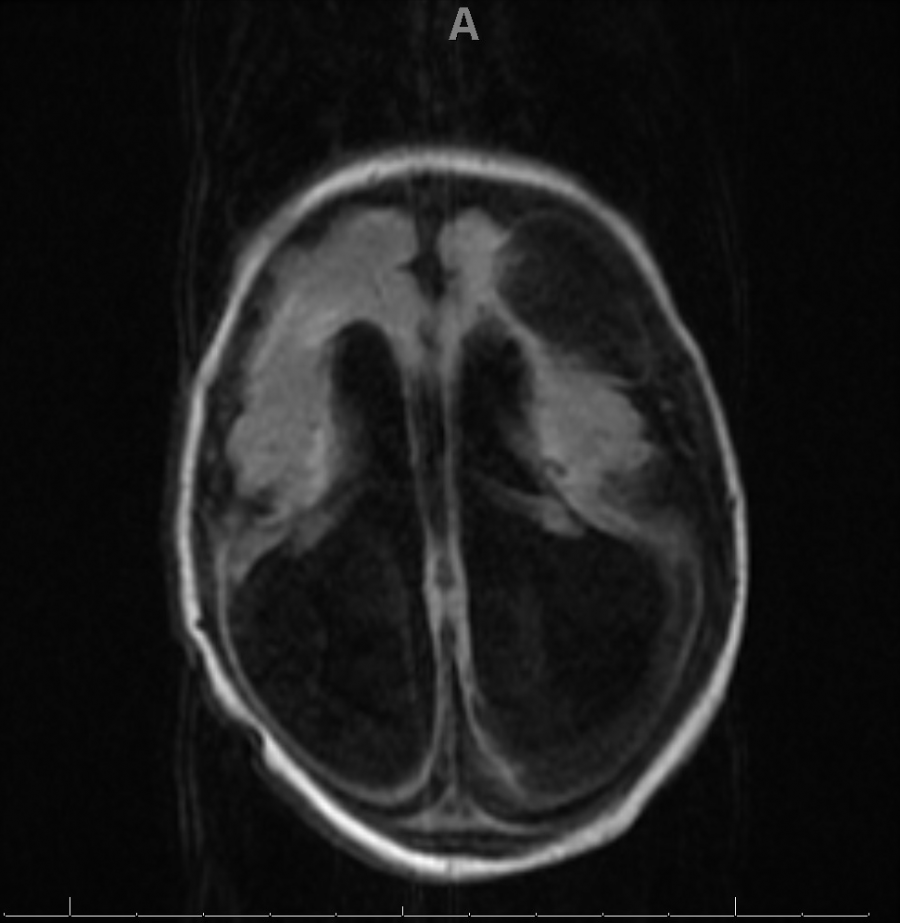 MRI of a neonate showing ventriculomegaly

The ocular manifestations include:

Optic atrophy, nystagmus, esotropia, exotropia have been seen only in patients with chorioretinal scarring. Microphthalmia and cataracts have also been noted. [15]

A lumbar puncture may be performed which may reveal abnormalities in the CSF. MRI can reveal pertinent findings (as above).

Blood work up and a spinal tap may be indicated. Laboratory diagnosis is usually made by detecting IgM and IgG antibodies in the CSF and serum. Virus can be detected by PCR or virus isolation in the CSF during the acute stage of illness. [16]

The differential diagnosis for congenital LCMV is primarily the TORCH infections with a few non-infectious etiologies.

There is no known medical therapy for LCMV. Treatment is primarily supportive. Ribavirin has been used in certain cases, however the role of ribavirin in the treatment remains unclear. [6]

Patients affected by congenital LCMV should have multi-disciplinary follow-up with an ophthalmologist, neurologist, physical therapy, and occupational therapy.

Vision loss in patients with congenital LCMV is often very severe. Given the pathophysiology, brain function is also severely affected. Children with microcephaly nearly always have severe mental disability, epilepsy, and quadriparesis. However, those with only cerebellar hypoplasia may have slight learning disability and ataxia.

The prognosis for acquired LCMV is generally good with mortality <1%.