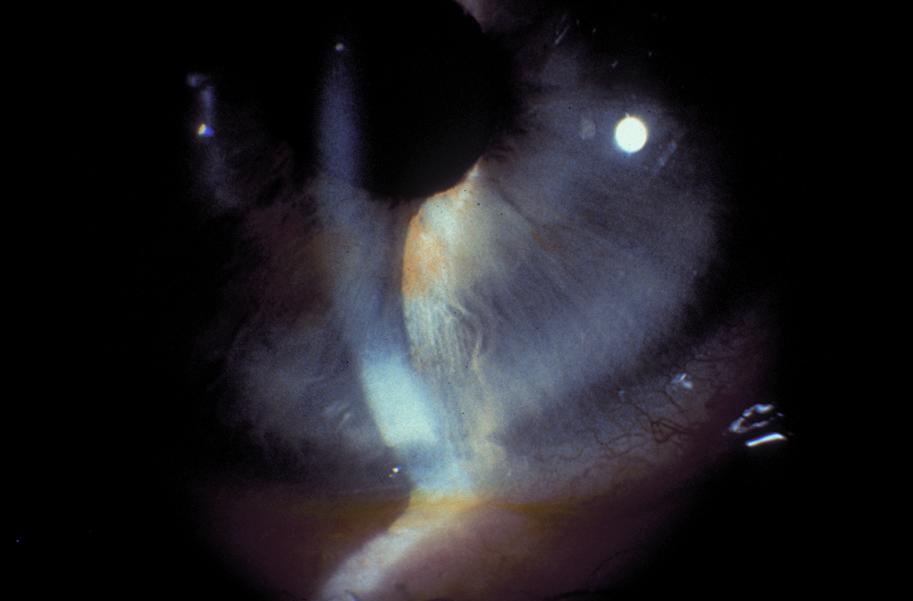 Iridoschisis is a rare condition in which the anterior layer of the iris stroma is separated from the posterior iris stroma and muscle layers. The anterior layers disintegrate into thin fibrils with free ends floating in the anterior chamber. In 1922, Schmitt described the first case of this iris splitting [2], which was later termed “iridoschisis” by Lowenstein and Foster in 1945.[3] Lowenstein and Foster described a case of bilateral iridoschisis in a woman with end stage glaucoma leading to enucleation in one eye. This allowed for the first histological study of the condition, revealing deep clefts between largely atrophic anterior stromal layers and the posterior stromal iris layers[3] . Since then, more than two-thirds of all reported cases of iridoschisis have been associated with some form of glaucoma. [4]

There have been approximately 100 cases of iridoschisis reported in the literature [4]. The causative agent of iridoschisis is not yet identified. Lowenstein and Foster suggested that there might be an anatomic basis for the particular plane at which that the stromal cleavage occurs[3]. They theorized that there may be an atrophic effect of lytic substances in the aqueous humor due to a glaucomatous condition or secondary to trauma that may induce an intraocular pressure peak that shears iris along the dilator fibers and splits the stroma. Lastly, they considered that the iridoschisis simply could be attributed to senile changes. Other authors have suggested that with age there is increasing sclerosis of iris blood vessels, which induce a shearing action that along with dilation and constriction of the iris sphincter tears the anterior and posterior stromal layers apart.[5]

Reports of iridoschisis and plateau iris configuration suggests that the mechanism of iridoschisis has more to do with a congenital anatomical anomaly than with senile or traumatic changes.[6] [7] Finally, some authors suggested that prolonged treatment with miotics can cause a mechanical shearing action that provokes tearing of the iris stroma. [8] However, miotics were commonly used for glaucoma therapy for many years and few miotic users developed iridoschisis.

Flouroiridography studies reveal normal perfusion of blood vessels in the affected portions of the iris, eliminating ischemia as a contributing factor. [9] Histopathology studies of the iris reveal tissue fibrosis and atrophy leading to clefts between the anterior and posterior stromal layers [5]. There is a diminished number of collagen fibrils in the affected iris sectors on electron microscopy. Both histopathology and electron microscopy studies suggest that the iris vessels are largely normal, other than possible swelling of vessel endothelial layers. The normal vasculature and perfusion in iridoschisis also differentiates the condition from essential iris atrophy, negating the theory that iridoschisis is a type of essential iris atrophy. [4] Corneal endothelial cells that come into contact with the floating iris strands can degenerate, but otherwise the cornea is unaffected in this condition. [4][5][10]

Patients with iridoschisis typically present in the fifth to seventh decade of life, and often with complete angle closure and glaucomatous damage.[4] The anterior iris stroma splits from the posterior and muscle layers, and the loose ends wave in the aqueous humor of the anterior chamber. Most commonly, iridoschisis is seen in the inferior iris (Figure 1). Iridoschisis may appear unilateral at first but generally is a bilateral condition. [11] 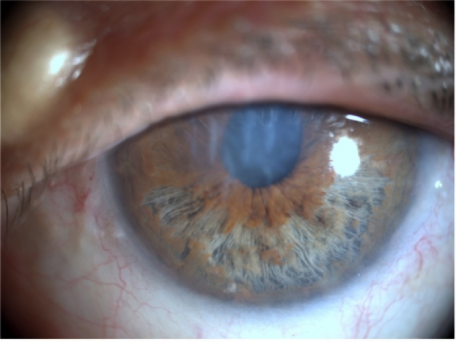 Two-thirds of reported iridoschisis cases have associated glaucoma,[4][11] about half of which are cases of angle closure glaucoma, although angle recession and open angle glaucoma have also been reported. [8][13] Iridoschisis coexisting with presenile cataracts is also documented. [14] [15] Generally, the cornea is unaffected although there are reports of bullous keratopathy due to endothelial cell loss from direct contact with the floating iris strands.[10] There are also a few reports of iridoschisis in patients with keratoconus, [16] including one occurring after penetrating keratoplasty. [17] 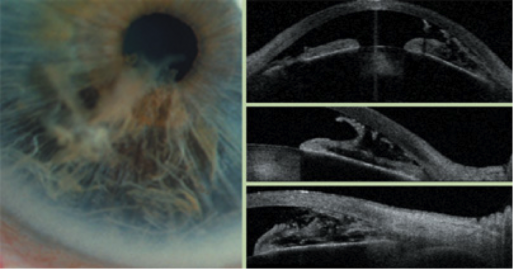 Figure 2. Visante OCT of an iridoschisis patient shows cross-sections with associated "shredded" appearance of the iris. [18]

High resolution images with anterior segment ocular coherence tomography (OCT) and ultrasound biometry (UBM) show cleavage of the iris into two layers with the anterior stroma of the iris separating into individual fibrils. [19][20] [21]The pigmented epithelium remains intact while the fragmentation of the iris causes occlusion of the angle (Figure 2).

Iridoschisis has been associated with both anterior and posterior lens subluxation.[22][23] With anterior subluxation, often the anterior chamber is narrowed causing an angle-closure glaucoma, and/or the subluxed lens itself begins to rub on iris, possibly precipitating the development of iridoschisis.

There is one report of a family with iridoschisis accompanied by narrow anterior chambers and presenile cataracts [14]. The author of this report suggested that the condition had an autosomal dominant inheritance and that family members of patients with this condition should be screened.

In one case study, both a 50-year-old patient with iridoschisis and her asymptomatic daughter were scanned with high frequency ultrasound. [25] The iridoschisis patient exhibited diffuse iris stroma changes with an intact posterior iris pigmented layer; her daughter, also showed discrete but less severe iris stromal changes, suggesting a hereditary component to the condition.

The differential diagnosis of iridoschisis includes the two other major conditions affecting the iris stroma—Iridocorneal endothelial syndrome (ICE) and Axenfeld-Reiger syndrome. ICE most often presents in the third or fourth decade, earlier than iridoschisis. [26][27] ICE is also unilateral and progressive in contrast to iridoschisis. While iridoschisis is characterized by stromal splitting without any holes in a single, usually inferior, iris sector, ICE syndrome can present with iris holes from stromal atrophy as well as peripheral anterior synechaie that extend to Schwalbe’s line. The pupil in ICE syndrome patients can often be ectopic, displaced towards the peripheral anterior synechiae. There can also be polycoria, and the cornea often has endothelial pleomorphism and cell loss; whereas iridoschisis patients have normal, round and reactive pupils with normal corneas.

Axenfeld-Reiger syndrome, in contrast to both iridoschisis and ICE, is present at birth, bilateral and nonprogressive.[27][28] Patients with Axenfeld Rieger syndrome have iris atrophy that can lead to holes as well as peripheral anterior synechiae with an anteriorly displaced Schwalbe’s line. They may also have irregular pupils and corneal endothelial changes. Key differences between these three conditions are highlighted in the table below 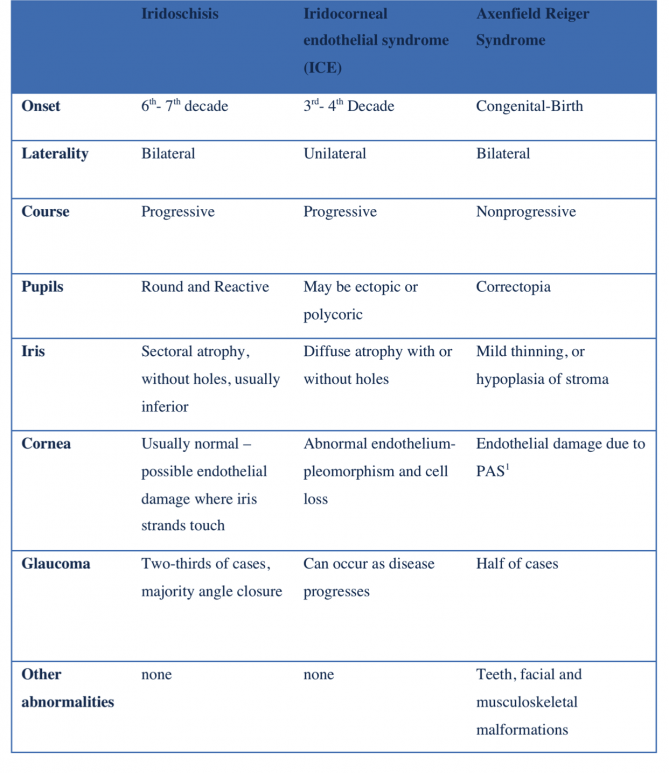 Salmon et al. looked at 12 patients with iridoschisis, and found that all patients had partial or complete angle closure on gonioscopy, particularly in the superior angle. [31] Intraocular pressures ranged from 12 to 65 mmHg (mean 35 mmHg) and ten of twelve patients endorsed intermittent headaches and eye pain. They theorized that even if iris changes are seen prior to a typical acute angle closure attack, the presence of intermittent headaches and eye pain suggest subacute angle closure where asymptomatic intermittent elevations in intraocular pressure could provoke the iris stromal atrophy. Salmon concluded that primary angle closure glaucoma should be excluded in all patients who present with iridoschisis. [31]

The mechanism by which iridoschisis causes angle closure is not certain. Some have speculated that the free floating anterior stromal fibers may bow forward and come in contact with the trabecular meshwork causing elevation of intraocular pressure and angle closure. [25] Danias et al used high frequency ultrasound to show that the intact posterior pigment epithelium may drape over the anterior capsule of the lens and cause a form of pupillary block, while the anterior stromal fibers bow forward and obstruct the angle. Others have proposed that the pigment released from the stromal atrophy may clog the trabecular meshwork [10]; however, Salmon and associates questioned the likelihood of this mechanism given the majority of iridoschisis patients respond to medical management. [31]

Shima et al reported a case of iridoschisis and plateau iris configuration. UBM revealed anteriorly displaced ciliary body, narrowing of the iridocorneal angle and a flat iris in all 4 quadrants. [7] The authors speculated that iridoschisis may be a part of the general anterior anatomic malformation of ocular structures and suggested that UBM should be performed in cases of angle-closure glaucoma associated with iridoschisis to distinguish the presence of pupillary block from plateau iris configuration.

About one-third of patients with iridoschisis do not have glaucoma and therefore may not require any intervention. However, given that the majority of patients do develop some form of glaucoma, it is very important that the patients have a thorough work up for glaucoma including visual field testing, gonioscopy, tonometry and careful assessment of the optic nerve. Additionally, the cornea should be monitored for signs of decompensation over time. If glaucoma is not diagnosed at initial presentation, patients should still be followed closely to rule out glaucoma development. For those patients that do present with elevated intraocular pressures, most have been reported to respond quickly to medical management. [31] Laser peripheral iridotomy can be performed in those patients with angle closure not undergoing cataract surgery. Trabeculectomy can be performed in those patients where intraocular pressure is not adequately lowered with medical management. [7] [22] [31] Many patients with iridoschisis have presenile cataracts and the partial or complete angle closure can be relieved with cataract extraction. [15] [31] During phacoemulsification, the vitrector has been used to perform an iridectomy of the anterior stroma. [32] The vitrector or microcautery may also be used to manage free stromal fibers that can interfere during the procedure.[33] If corneal decompensation occurs, non-Descemet's Stripping Automated Endothelial Keratoplasty (DSAEK) and Descemet's Membrane Endothelial Keratoplasty (DMEK) may be successfully employed. [34][35]