Macular holes are one of the main vitreoretinal interface disorders and their prevalence varies from 0.2 to 0.7% in the general population [1]. They are due to an anatomical defect in the fovea which causes the poor central vision reported in this entity (see detailed information on "Macular Hole" here ).

In 1991, Kelly and Wendel [2] described the first surgical approach to this condition which, until then, was considerable untreatable. The rational of the surgery was the identification and treatment of vitreoretinal traction forces, either tangential, anteroposterior or both. Ever since, the treatment strategy has been improving and currently most of macular holes (around 85-90%[1]) can be successfully closed using a procedure involving pars plana vitrectomy, dye-assisted internal limiting membrane peeling, and gas tamponade. However, for some macular holes such as those which are large, chronic, or associated with myopia, surgical failure is more commonly seen. In fact, the rate of persistent macular hole varies between 8-44%[1] in literature. In 2010, Michalewska et al[3] introduced the inverted flap technique, thus providing a new surgical approach to overcome these challenging scenarios. On their original description of the inverted flap technique, Michalewska et al reported a 98% closure rate of large macular holes (defined as > 400 µm, according to the classification in the International Vitreomacular Traction Study[4]). As the success of the procedure was broadly demonstrated since the beginning, the indications and applications of the technique have grown, surpassing the previous standard procedures in selected situations.

This procedure is not indicated in eyes with previous internal limiting membrane removal around the macular hole[6].

The anatomical success of the surgical treatment of large macular holes (usually defined as having a diameter >400 µm, based on the horizontally measured linear width at the narrowest point of the hole) using vitrectomy and internal limiting membrane peeling is reportedly low. In fact, large macular holes have been recorded to remain open after primary repair in up to 44% of cases[1]. Consequently, the inverted flap technique was developed to resolve these challenging situations[3]. The success that it demonstrated when compared to standard treatment resulted in its dissemination as a primary choice.

Macular holes associated with retinal detachment, especially in high myopia, present a demanding situation with frequent low closure rates. An open macular hole in these cases not only impairs central vision but also increase the risk of recurrent retinal detachment. Inverted flap technique has also demonstrated increased success rate when compared to the standard procedure in these patients [8][9][10][11].

Given the success of the technique, its use has been expanded to other scenarios, such as traumatic macular holes [12][13], where the standard approach demonstrates a low success rate. Nevertheless, more sustained evidence is required to prove the superiority of the above-mentioned method in such scenarios.

According to the original description[3], the surgery steps are :

The technique is demonstrated in the video below (the video demonstrates the procedure performed by our group, courtesy of Dr. Antonio Rocha):

The procedure aims to eliminate the anteroposterior and tangential traction exerted on the retinal surface by removing all cortical vitreous and surface components of the retina, namely epiretinal membranes, and internal limiting membrane, while stimulating cell proliferation and migration of glial cells into the macular hole. Therefore, it enhances the chances of closure and potentially improves the postoperative visual acuity.

The histopathological mechanism of macular hole closure using the inverted flap technique is thought to be multifactorial.

The internal limiting membrane, that contain Muller cells, may help inducing gliosis and provide a scaffold for glial cell proliferation thereby facilitating the closure of the hole. An experimental study in macular hole models corroborated this theory, and found that activated Muller cells present on the surface of the internal limiting membrane produce neurotrophic factors that may contribute to macular hole closure [14].

Several studies have reported the success of the inverted flap technique in both anatomical closure of the macular hole and functional recovery under different circumstances. 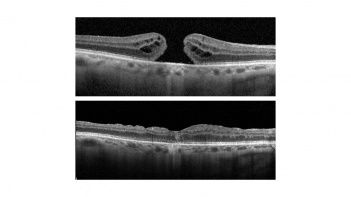 Myopic Macular Hole (associated or not with Retinal Detachment) 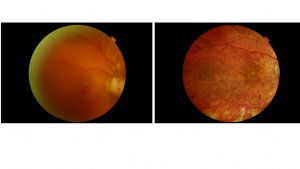 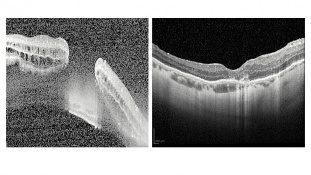 Most of the complications are similar to the standard vitrectomy and internal limiting membrane peeling.

It is worth noting that the inverted internal limiting membrane flap may detach spontaneously during the fluid-air exchange. Thus, this step must be carefully performed to achieve a successful result.

As the internal limiting membrane is the basement membrane of the retinal glia, thereby playing an important role in buffering the intraretinal potassium concentration, it has been argued that the flap technique may disturb this process thus inducing retinal damage. However, when this was accessed using multifocal electroretinograms and microperimetry, no deficits were found[21].

Special Considerations and Variations of the Technique

Several variations of the technique have been adopted:

Vitrectomy associated with the inverted internal limiting membrane flap technique seems to be an effective approach to repairing macular holes that are predisposed to a lower probability of closure, such as refractory, large, or chronic holes.