Postoperative endophthalmitis is a rare but vision threatening complication of cataract surgery that is reported to occur at a highly variable rate.[1] It is associated with risk factors such as age, [2][3] male gender, [3][4][5] intraoperative posterior capsule rupture[3][4], and other ocular comorbidities. Various preventative measures are used by surgeons, most common being preoperative 5% povidone-iodine as it is supported by level 1 evidence to reduce the incidence of endophthalmitis.[6][7] In addition to topical application, different routes of antibiotic injection are also utilized, including subconjunctival, intracameral, and intravitreal.  Intracameral (IC) injection, in particular, has gained its popularity as prophylaxis following an ESCRS study in 2007 that demonstrated a five-fold decrease in postoperative endophthalmitis rates with IC cefuroxime use.[8]

Although there is increasing evidence that intracameral antibiotics are effective, considerable variation remains in antimicrobial prophylaxis without worldwide consensus. [9][10][11][12][13] While topical antibiotics use is a common practice, intracameral prophylaxis has not been universally adopted, partially due to the universal availability of a commercial formulation. [1][6][12][14][15]

While precise bacterial isolates may vary depending on risk factors such as age and vitreous communication,[16] the majority of endophthalmitis causing microorganisms in acute post-cataract surgery are gram-positive, with coagulase-negative staphylococci being most common. [17][18][19][20][21][22]

Benefits and risks of different prophylactic antibiotic routes have been compared in multiple studies. Some studies suggest that intracameral antibiotics alone are as effective as a combined intracameral and topical approach, reducing frequency and duration of eye drops and improving compliance. [23][24] Based on a 2017 Cochrane review, high-certainty evidence supports the efficacy of intracameral cefuroxime alone with or without topical levofloxacin while moderate-certainty evidence supports a combination of topical eye drops and intracameral injection compared to either approach alone. [25]

Whether the use of long-term or short-term topical antibiotics adds any clinical benefit is questionable. [1][26][27] A 2013 Cochrane review and subsequent studies demonstrated that topical application may be less effective than intracameral injection when compared individually. [17][28] Systematic review and meta-analysis revealed no difference between topical and intracameral route on preventing endophthalmitis. [1][23]

The efficacy of subconjunctival injection is generally inferior to that of intracameral use according to a systematic review.[26]

Intravitreal injection of combined steroid and antibiotics was first introduced by James Gills, MD and Paul Koch, MD in 2005. An advantage of intravitreal injection is that while anterior chamber has a turn-over rate of two to four hours, the vitreous cavity functions more as a deposit, releasing content over a prolonged time period.

A restrospective review (n=1429) of single-specialty ambulatory center in New Jersey by Tyson et al. evaluated its use of transzonular intravitreal Tri-Moxi-Vanc injection. Although no postoperative endophthalmitis cases were found, a topical equivalent rate of breakthrough inflammation and CME occurred.[33] However, due to reports of hemorrhagic occlusive retinal vasculitis with vancomycin use, intraocular vancomycin should be used judiciously.

Toxic anterior segment syndrome and corneal endothelial toxicity are major concerns following ocular injection procedure. Any injection has potential to cause inflammation from drugs, preservatives, or other solution ingredients in addition to changes in the pH and osmolality of the anterior chamber. It is important for the antibiotic of choice to remain above MIC of causative pathogens for an appropriate duration without causing toxicity.

Time-dependent bactericidal effect via inhibition of cell wall synthesis. It is a broad-spectrum antibiotic that covers both gram-positive and gram-negative organisms with notable exceptions of methicillin-resistant Staphylococcus aureus (MRSA) and multidrug-resistant Enterococci.

Available in a single-use commercial product called Aprokam. (Thea Pharmaceuticals, Clermont-Ferrand, France) Aprokam is a powdered solution used by dissolving in 0.9% sterile sodium chloride and is widely available in European countries but not in the US. It is a cost-saving option for hospitals with a lower risk of dilution error.[34]

Recommended dose for intracameral cefuroxime in an otherwise healthy adult is 1.0mg/0.1mL.

ESCRS is currently the only randomized trial studied on IC cefuroxime which demonstrated a five-fold reduction in postoperative endophthalmitis rate (n=16,603).[8]

This study, however, also recognized other important factors that concomitantly increased the infection rate including use of silicone as IOL optic material, clear corneal incision, and posterior capture rupture.

Multiple surgical centers in various countries that compared periods before and after the introduction of the 2007 ESCRS endophthalmitis study and subsequent adoption of IC cefuroxime have agreed on its efficacy through retrospective observational studies, concluding its efficacy in 2015 systematic review and meta-analysis.[1][23]

Continued use of IC Cefuroxime, however, may increase prevalence of resistant strains, especially Enterococci spp.[35]

IC cefuroxime has reported cases of TASS development that improved upon switching to IC moxifloxacin.[36]

Other risks and limitations

Cakir et al. reported a case series of Fusarium endophthalmitis in 8 patients in whom compounded intracameral cefuroxime was used.[36]

Reported side effects with administration of high-dose cefuroxime include iridocyclitis, macular edema,[40][41] macular infarction,[42] retinal infarction, and retinal detachment that may or may not be transient.

Even when the dilution process is free of error, retinal toxicity may still develop sporadically.[43]

Currently published studies support the efficacy and safety of IC cefuroxime use in diabetic patients,[44] those complicated by history of keratoplasty,[45] and perioperative posterior capsular rupture. However, no randomized controlled trial has been performed to date.[46]

Cefuroxime theoretically carries a potential to cause hypersensitivity reactions including life-threatening anaphylaxis.

In the majority of patients who self-declare to be allergic to penicillin, evidence supports use of intracameral cefuroxime prophylaxis.[51][52]

It carries low risk due to different side chains compared to penicillin, and a high rate of negative skin testing. Although rare, anaphylactic reactions have been reported to occur.[53]

It also provides coverage for gram-negative and atypical pathogens.

Currently, Vigamox (Alcon Laboratories Inc., Fort Worth, Tx, USA) is a commercially available moxifloxacin eye drops in concentration of 0.5%. It has similar pH and osmolarity values to those of anterior chamber. It is also a preservative (benzalkonium chloride) free isotonic solution.

Another less commonly used commercial product known as Moxeza had reported cases of TASS when given intracamerally due to its inactive ingredients.

Several dose concentrations have been studied with a proposed range of 150ug/ml to 500ug/ml for both safety and efficacy.  [23][55]

In 2019, Shorstein and Gardner proposed flushing model that would provide more consistent and sustainable anterior chamber dose delivery. [56] The model consists of injecting 0.5%/0.1mL and flushing with 0.15%/0.5ml of moxifloxicacin. Their in vitro study concluded that first injection provides enough concentration to provide adequate coverage but not long enough to cause corneal endothelial damage. Subsequent irrigating step replaces aqueous humor that may dilute the antibiotics while drug concentration in anterior chamber is sustained at intended level irrespective of AC volume.

In 2016, Arshinoff performed a retrospective review and mathematical model to conclude that final dose of 150ug/0.1ml by diluting 3ml of 0.5% Vigamox with 7ml balanced salt solution and delivering 0.3 - 0.4 ml of the diluted solution through the side port after sealing and hydrating the main incision would provide adequate concentration and duration to achieve MIC90 that produces optimal bactericidal effect. [57]

Two articles both agree on larger injection volume although proposed methods of sustaining that dose are different.

In India, Chang et al. conducted a high power retrospective chart review in 2016 that showed a four-fold decrease in postoperative endophthalmitis rate with IC moxifloxacin use in the Aravind Eye Care system.[58] Extended studies of Chang et al. indicated a three-fold decrease of POE in M-SICS and six-fold in phacoemulsification.[59][60]IC moxifloxacin has also been found to improve surgery outcomes of cataract surgeries complicated by PCR [59][60]or penetrating keratoplasty.[61]

The efficacy and safety of moxifloxacin has been further supported by multiple observational studies.[26][55][62]A 2019 randomized controlled study by Melegaet al. reported endophthalmitis rate of 0.05% in 1818 of studied eyes that were treated with undiluted 0.5% of IC moxifloxacin at the end of phacoemulsification.[63]Comparatively, controlled group resulted in endophthalmitis rate of 0.38%. (n=1822, p=0.035)

It has an additional advantage of relatively low MIC values for most endophthalmitis-causing bacterial pathogens.

Although moxifloxacin is a broad-spectrum antibiotic, it does not eliminate the risk completely. A case of acute endophthalmitis in immunosuppressed patients due to resistant strain of Staphylococcus epidermidis has been reported with IC moxifloxacin use. [64]

Vancomycin is a bactericidal antibiotic that works by blocking cell wall synthesis, but is also bacteriostatic for at least first 6 hours.

It has good coverage of gram-positive organisms, but it is ineffective against gram-negative pathogens.

Ocular MRSA is also an increasing incidence, for which Vancomycin has excellent coverage.

Vancomycin is prepared using its powdered form to achieve a recommended dose of 1.0mg/0.1 mL.

Due to its low pH, it must be prepared with a buffer and balanced salt solution.

Any error during the compounding process has a potential to cause TASS and corneal damage.

Studies regarding the efficacy of IC vancomycin are lacking, including randomized controlled trial.

Some studies suggest its utility and coverage against MRSA [73]and coagulase-negative Staphylococci.[19]

Efficacy of intracameral vancomycin at reducing postoperative endophthalmitis have been supported through multiple retrospective studies.[62][74][75][76]

A 2016 review of large cohort studies by Huang et al. showed general reduction in infection rate with heterogeneity in study results while a 2015 systematic review of nonrandomized studies by Kessel et al. concluded no significant effect with very low quality of evidence. [1][26] 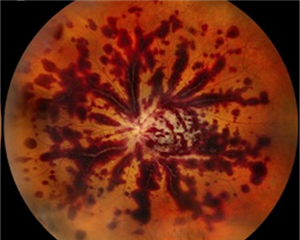 Vision loss was another complication, worse with second bolus of IC vancomycin injection and better with intravitreal corticosteroid injections. 22 cases that underwent FA all showed peripheral ischemia. Hemorrhagic cases are more frequently associated with bilateral sequential cataract surgery, and PORV required several treatment approaches, including topical and systemic corticosteroids, antivirals, and early vitrectomy. The study recommended early anti-VEGF therapy and panretinal photocoagulation in addition to steroid treatment. FDA subsequently issued warning that the use of IC vancomycin is not recommended due to reported adverse events. (FDA)

When all three antibiotics were compared in a systematic review and meta-analysis, IC cefuroxime and moxifloxacin showed both efficacy and safety at standard doses[1][23]in addition to cost-effectiveness.[81]

A 2018 systematic review and meta-analysis by Bowen et al. demonstrated pooled weighted averages for POE incidence for ICC, ICM, and ICV were 0.0332%, 0.0153%, and 0.0106% on moderate to high quality of evidence. High quality evidence supports use of ICC.

Arshinoff et al. generated an exponential decay model consistent with literature review and concluded that moxifloxacin as the most effective of the three with its ability to overcome resistance via dose-dependent manner. [82]

In vitro studies using bacterial isolates of endophthalmitis cases by Libre and Matthews concluded that only moxifloxacin of 3 antibiotics has coverage for all isolates and is effective against Pseudomonas. To provide effective coverage of both Staphylococcus and Pseudomonas, they recommend delivery of least 0.5mg.[83]

Moxifloxacin is most likely to cause immediate damage to vascular endothelial cells when studied in vitro while vascular toxicity and inflammation induction were significant with in vitro injection of cefuroxime and vancomycin. [66]

Their dose-dependent toxicity on human corneal endothelial cells studied in vitro showed a narrow range of toxicity with potential to induce irreversible cell death at concentration higher than 15.0mg/mL.[84]Cell viability was significantly reduced at concentrations higher than 2.75mg/mL of cefuroxime and 5.0mg/mL of vancomycin.

Both vancomycin and cefuroxime have the potential to increase macular thickness at a comparative level, likely due to inflammation.[85]

An in vitro study showed synergistic effects when combined intracameral cefuroxime with levofloxacin that may overcome most antibiotic-resistant strains.[87]

Intracameral injection allows multiple benefits during cataract surgery evidenced by randomized controlled trials and meta-analysis. Of three antibiotics of choice, IC moxifloxacin seems to be the most promising when comparing POE rate and reported side effects with broad-spectrum coverage. More widely available commercial formulation is needed to adopt its use throughout countries, but there are compounding pharmacies producing combination of antibiotic/anti-inflammatory medications that appear promising. We need additional data to establish effectiveness.