Human T-cell Lymphotropic virus type 1 (HTLV-1) associated uveitis, characterized by a granulomatous or nongranulomatous reaction accompanied by vitreous opacities and retinal vasculitis, can be the only manifestation of this viral infection. Although HTLV-1 is endemic to certain parts of the world (such as Japan, Melanesia, Caribbean Islands, Central and South America, and central African areas), HTLV-1 uveitis is significantly increasing in non-endemic areas due to migration, becoming a relevant agent in differential diagnosis of patients with idiopathic uveitis.

Human T-cell Lymphotropic virus type 1 (HTLV-1) is a retrovirus known for its association with Adult T-cell Leukaemia/Lymphoma (ATL) and with HTLV-1-Associated Myelopathy/Tropical Spastic Paraparesis (HAM-TSP)[1] , a chronic meningomyelitis of the grey and white matter in the spinal cord, with perivascular demyelination and axonal degeneration [2].

HTLV-1 can affect the eye in multiple ways, including malignant infiltrates, corneal damage, retinal degeneration or exudation, neurophthalmic disorders, keratoconjunctivitis sicca, and uveitis (HU)[3] . HU is characterized by an anterior uveitis [4][5] with a granulomatous or nongranulomatous reaction accompanied by vitreous opacities and retinal vasculitis with rare exudative retinochoroidal alterations in one or both eyes[6]. It can be the only manifestation of the disease or be associated with HAM-TSP, in which case it is more frequent among patients with earlier onset of HAM-TSP than among patients with severe motor disability[5].

HTLV-1 is an oncovirus of the retrovirus family, first discovered by Poiesz et al in 1980[7]. It has six reported subtypes and the great majority of infections is caused by the cosmopolitan subtype A, however, there are no reports of subtype influence on the pathogenic potential of the virus[8].

Approximately 20 million individuals are estimated to be infected with HTLV-1 worldwide, with the great majority remaining asymptomatic carriers during their lifetime[9]. It is endemic to the Japan, Melanesia, Caribbean Islands, Central and South America, and central African areas [10]. In Europe and North America the prevalence is low and limited to groups that have migrated from areas of endemicity[11] .

The most important routes of HTLV-1 transmission is vertical transmission from mother to child, predominantly through breastfeeding (20% efficiency in transmission, correlated with individual variables such as HTLV-1 proviral load, the concordance of HLA class I type between mother and child, and the duration of breastfeeding [14]). Transmission is also possible during the intrauterine period or peripartum [15].

It is also a disease transmitted through sexual intercourse, and blood contact (the most efficient mode of transmission) [10].

There is an increasing prevalence with age and in women, especially after 40 years of age[16].

With modern molecular technology, the pathogenesis of HU has been partially unveiled[17]. The cells floating in the anterior chamber were found to be lymphocytes, the majority being CD3+ T cells, along with a few macrophages[18]. Polymerase chain reaction analysis revealed that HTLV-1 proviral DNA was detected in almost all patients with HU but not in patients seropositive for HTLV-1 and uveitis of another cause[18], which suggested a role for HLTV-1 infected cells in the pathogenesis of uveitis. Viral mRNA and HTLV-1 protein were also detected in the aqueous humor of HU patients.

Also, virological analysis supported the pathogenicity of the virus in the eye, demonstrating that the HTLV-1 provirus load in patients with HU is significantly higher than that in asymptomatic carriers without uveitis [20] and that the proviral load in peripheral blood mononuclear cells correlates with the intensity of intraocular inflammation[21].

Vertical transmission (especially through breastfeeding) is a very important route of dissemination; therefore, its prevention would have the most significant impact on the spread of the disease[1], [22]. In endemic areas, prenatal screening for HTLV-1 combined with counselling of seropositive mothers could help prevent and diminish the occurrence of HTLV-1 infection[1]. In the case of pregnancy, a caesarean section should be recommended to minimize the risk of perinatal transmission.

In most African countries and other areas that lack appropriate policies and infrastructures for transfusion services, blood transfusions still represent a risk of HTLV-1 infection. As such, screening for blood donor candidates would be an effective strategy in preventing HTLV-1 transmission. For countries where the disease is not endemic, selective donor recruitment is an option to consider[10].

The patient may present with visual blurring, discomfort and floaters of acute or subacute installation. HU may be found in association with HAM/TSP or as an isolated manifestation of the viral infection[23]. There are no cases in literature of ATL developing in patients with HU[24]. An association with Graves’ disease has been reported, and in all cases HU occurred after the onset of Graves’ disease[25].

It is characterized by an anterior uveitis with a granulomatous or nongranulomatous reaction accompanied by vitreous opacities and retinal vasculitis[4] with rare exudative retinochoroidal alterations in one or both eyes[6]. Retinal degeneration, retinal haemorrhages, epiretinal membranes and optic nerve atrophy can occur. Anterior segment alterations might include corneal haze, scarring and neovascularization[26]. 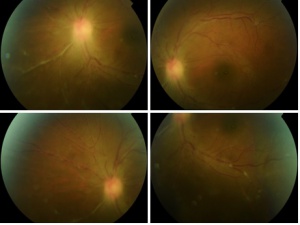 Patients may present with the following symptoms:

The diagnosis is one of exclusion. It should be considered when a patient is seropositive for HTLV-1 with no systemic evidence of HTLV-1-related diseases (such as ATL or HAM/TSP) after exclusion of other potential uveitis causes[17].

The differential diagnosis depends on the ocular presentation but multiple sclerosis, syphilis, sarcoidosis, and Behçet’s disease are among the diagnosis to consider[27].

Most cases respond favourably, however, approximately 60% of patients recur[28]. 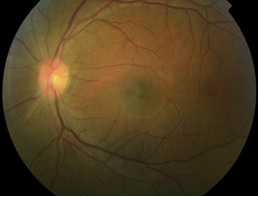 Same patient, after treatment with topical and oral prednisolone initiated at 1mg/kg/days for five days with subsequent taper. (Author’s own images)