Gradenigo Syndrome (GS) is classically described as a clinical triad of otitis media, facial pain and abducens palsy that is most commonly developed from infection in the petrous temporal bone (i.e., petrous apicitis) [1]. The full triad of GS however may not always be present especially in the post-antibiotic era .

GS is rare in the post antibiotic era. First described in 1904 [1], it typically arose from a progression of untreated or partially treated otitis media. With appropriate antibiotic use, it is now becoming increasingly rare [2]. In the preantibiotic era, intracranial complications secondary to ear infection occurred in 2.3-6.4% of cases [3]. With the introduction of more potent and effective antibiotics, and later with more refined surgical techniques, intracranial complications decreased to 0.04-0.15% of cases [3].

The abducens nerve originates from the sixth nerve nucleus in the dorsal pons, ventral to the fourth ventricle (Figure 1). The fibers exit the nucleus and leave the brainstem at the pontomedullary groove, generally located medial and caudal to facial and vestibulocochlear nerve. The nerve then courses through subarachnoid space to reach the upper edge of the tip of the petrous bone (part of the temporal bone) towards the clivus. This portion of the petrous bone is where the nerve is most susceptible to mastoiditis, otitis or bone infection of any sort. Passing the clivus, the abducens nerve is then surrounded by a fibrous bone-less sheath, known as Dorello's canal, where the nerve is sensitive to stretching with changes in intracranial pressure. After exiting Dorello’s canal, it then enters the cavernous sinus and follows the internal carotid artery before entering the orbit through the superior orbital fissure to innervate the lateral rectus [4]. 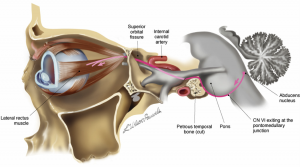 Patients who have extensively pneumatized petrous apices are more at risk of developing the symptoms of GS. In these patients, ear infections can spread into air spaces within the temporal bone, increasing the risk of compromising nearby nerve structures [5]. Patients with cholesteatomas and chronic osteomyelitis are also at higher risk [6][7]. Diabetics, patients on high dose steroids, and immunosuppressed individuals may be at higher risk of GS because of a weakened ability to limit the spread of infection [8].

GS may progress from untreated otitis media when the infection spreads to the petrous apex of the temporal bone. Infection is commonly caused by Streptococcus pneumoniae, Haemophilus influenzae, Pseudomonas, and Staphylococcus aureus [9]. Tuberculosis and fungal infection is another less likely cause of infection[10].

Bacteria travels from the middle ear to the mastoid air cells, which contain highly vascular marrow and are susceptible to infection [5]. It can then spread to the adjacent petrous temporal bone, around which are located many key structures. These structures include the trigeminal ganglion and abducens nerve,' which are separated from the petrous bone only by dura mater [9]. Inflammation in this region can damage these nerves, causing facial pain and horizontal diplopia secondary to unilateral esotropia.

The administration of antibiotics upon diagnosis of otitis media helps prevent the progression to GS. [9].

GS is diagnosed by the clinical triad:

The timing of presentation of diplopia and facial pain varies with patients, and due to the rarity of GS it is difficult to determine a typical timeline of presentation for the clinical triad of symptoms. Furthermore, it is difficult to distinguish between facial pain that arises from trigeminal nerve lesion and a radiating headache that develops from a different cause also associated with infection and illness.

In four GS cases, diplopia was observed within a week of otorrhea [1][6][11][9]; in two cases, it was observed within two weeks [12][13]; in another two cases, within a month of otorrhea [14]; in one case, within two months [14]; and in one case, a year after presentation of chronic otorrhea. Notably, the delayed development of diplopia (after at least one month) was found in four of the five cases of prolonged otorrhea (at least one-month history of otorrhea).

The tympanic membrane should be examined for discharge. Extraocular muscle function, especially the lateral rectus, should also be tested.

The three classic signs of GS are: otorrhea, facial pain, and horizontal diplopia. 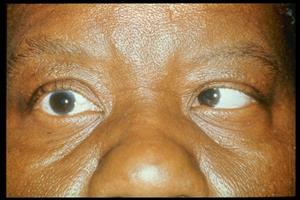 Antibiotics are given for an extended period. In more serious cases, other procedures such as myringotomies, placement of ventilation tubes, and surgery may be performed. There is no current guideline for determining when to move from conservative treatment, which risks deterioration of the cranial nerves, to more invasive surgical procedures [11][9].

High dose antibiotic therapy is the primary form of treatment. In cases where inflammation puts key structures at risk, surgery is performed, most commonly mastoidectomies and petrosectomies [9].

High-dose antibiotic treatment is the most common form of medical therapy. Multiple reported cases of GS involved infection by Staphylococcus or Streptococcus bacteria [1][11][16]. Cephalosporins were the most common antibiotics prescribed, in addition to penicillin, ampicillin, and vancomycin. In other cases, metronidazole was prescribed [12].

Other forms of treatment may be used in atypical cases to address the underlying illness. One case of non-Hodgkin’s lymphoma with associated GS was administered chemotherapy, with partial improvement to nerve functions [7].

GS may need to be treated aggressively with antibiotics and the major morbidity is hearing loss.[11] .

Patients who fail, are intolerant of, or noncompliant with maximal medical therapy may require mastoidectomy or petrosectomy which removes granulation tissue and necrotic bone that results from infection in either the mastoid cells or the petrous portion of the temporal bone [2][17][18]. A mastoidectomy is performed by making a retroauricular incision to access the mastoid antrum and the mastoid cells deep to it [18]. Using an electric burr and curette, mastoid cells lining the sigmoid sinus and the middle and posterior cranial fossas are removed [18]. A petrosectomy is a similar surgery involving the petrous portion of the temporal bone. It is also performed to remove diseased tissue and reduce further risk of bone erosion and inflammation at the petrous temporal bone [2].

Another related surgical method is an infralabyrinthine bony dissection, in which a burr is used to access the infralabyrinthine air cell tract and then the petrous apex of the temporal bone [11]. Purulent secretions can then be drained and the cavity irrigated with saline and hydrogen peroxide [11]. A tube may be placed to avoid recurrence [11].

Myringotomy, an incision at the tympanic membrane, can be performed to drain fluid. Ear ventilation tubes may also be placed into the ear for the same long-term function [11][2].

Otolaryngology should see the patient if surgical treatment is necessary.

Complications may arise from the spread of infection in several pathways: directly through the temporal and mastoid bone; through the labyrinth via the round window and oval window; or via the bloodstream or thrombophlebitis [19].

GS is rare and becoming even more rare since the advent of better medical and surgical treatment. Documented case reports suggest that in serious cases, treatment with antibiotics and surgery resolves symptoms of otorrhea, horizontal diplopia, and facial pain. However, some patients may not fully recover complete nerve function [8][6][10]

Most cases of GS have full resolution of signs and symptoms after conservative antibiotic treatment, but some cases required surgery [9][16].

If untreated GS can be fatal especially in resource limited nations. One pediatric case from Zimbabwe described a 9-year-old female admitted for discharge in right ear and a year-long history of chronic suppurative otitis media. Upon declination of surgery, the patient developed the clinical triad of Gradenigo’s at day 14, and on day 25, she was declared brain dead [13].