Gorlin and Goltz’s eponymous syndrome, also known as nevoid basal cell carcinoma syndrome (NBCCS), is an autosomal dominant disorder distinguished by multisystemic developmental abnormalities secondary to mutations in the patched-1 (PTCH1) gene. It is estimated to affect an average of 1 in 60,000 people worldwide, with a predilection for Caucasians, but occurs at equal rates between the sexes.[1][2][3]

PTCH1 is located on chromosome 9q23.3-q31, and encodes a transmembrane receptor for the ligand sonic hedgehog (SHH).[1] The PTCH1 protein plays a role in both embryonic development and tumor suppression in the hedgehog signaling pathway.[1][4] When unbound by SHH, PTCH1 suppresses the smoothened (SMO) receptor.[5] In the absence of PTCH1 however, SMO becomes constitutively activated, upregulating the hedgehog signaling pathway, and allowing downstream activation of glioma-associated oncogene homologs (GLI1 and GLI2).[5][6] Development of Gorlin-Goltz syndrome has also been linked to mutations in PTCH2 and SUFU.[7] The disease is most commonly inherited with complete penetrance and variable expressivity via a suspected two-hit model in which an inherited mutation in one PTCH1 allele is followed by an acquired loss-of- function mutation in the second allele.[1] Twenty to 40% of patients are estimated to acquire Gorlin-Goltz syndrome by de novo mutations of PTCH1 however.[8] 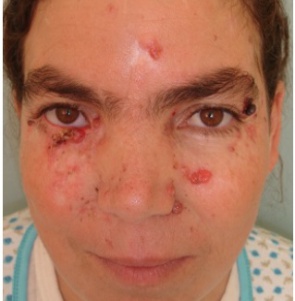 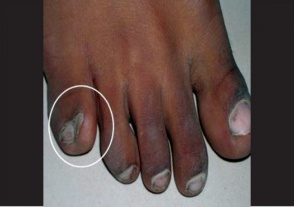 Single gene testing for sequence analysis and gene-targeted deletion/duplication analysis of PTCH1 and SUFU genes has become available. Antenatal diagnosis can also be established by DNA analysis of the PTCH1 gene by chorionic villus sampling and amniocentesis.[10][11] 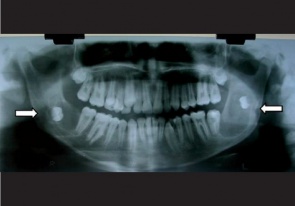 Mohs microsurgical excision is the mainstay of treatment for BCCs. This technique allows for complete removal of lesions whilst preserving the amount of non-involved tissue.

Medical therapy for Gorlin-Goltz syndrome and BCCs is a trending topic of research, and a variety of therapies have become available in recent years.

In an article by Micali et al., the use of topical chemotherapeutics such as imiquimod is described for the treatment of basocellular lesions. Imiquimod has been used with good results in patients who wish to avoid surgical intervention.[13]

Superficial BCCs without hair follicle involvement are treated by topical use of  tretinoin cream and fluorouracil applied to the affected areas twice daily. The use of vitamin A analogues (isotretinoin) or combined oral etretinate has also been suggested.[7]

Novel therapies like vismodegib (Erivedge®), a first-in-class hedgehog gene inhibitor with recent FDA approval for advanced and invasive BCC is also a therapeutic option. Literature of vismodegib being used in patients with Gorlin-Goltz syndrome seems promising with resolution of the keratocystic odontogenic tumors and increase in anti-tumor signaling. Vismodegib significantly reduced the rate of appearance of new surgically eligible BCCs among patients with Gorlin-Goltz syndrome.[6]

Life expectancy in Gorlin-Goltz syndrome is not significantly altered, but morbidity from complications can be substantial. Regular follow-up by a multi-specialist team (dermatologist, neurologist and odontologist) should be offered. Patients are advised to avoid excessive sun exposure as well as any form of radiation (X-ray, CT, and radiotherapy) given their intrinsic drive towards developing malignancies.