Fuchs’ Heterochromic Iridocyclitis (FHI), also known as Fuchs’ uveitis syndrome (FUS), was first described in 1906 by Austrian ophthalmologist, Ernst Fuchs, who reported a series of 38 patients with iris heterochromia, cyclitis, and cataract.[1] Since then, FHI has been further characterized as a constellation of clinical findings, which classically includes low-grade unilateral anterior inflammation with stellate keratic precipitates (KP), iris heterochromia, and prominent iris and angle vessels that bleed after paracentesis (Amsler sign).[2]

Ernst Fuchs presumed that FHI was caused by a noxious stimulus of unknown origin.[1]  The exact etiology of FHI is still unknown, and the disease process is likely multifactorial. Historical theories on the cause of FHI have associated it with sympathetic dysfunction, as well as multiple infectious etiologies such as toxoplasma, herpes simplex virus (HSV)[3] , chikungunya virus[4], cytomegalovirus (CMV), and rubella virus (RV).

Sympathetic dysfunction resulting in decreased innervation to stromal melanocytes and iris hypopigmentation was an early proposed theory for the etiology of FHI.[5] [6] [7] The abnormal innervation was thought to account for not only the iris heterochromia, but also the breakdown of the blood-aqueous barrier and subsequent inflammation. However, this theory was dismissed after only 25 of 1746 (1.4%) FHI cases in a retrospective study were found to be associated with Horner’s syndrome.[8] The prevalence of peripheral chorioretinal scars in FHI varies from 7-65% of cases, with most studies noting a prevalence of 10%.[7] Multiple studies have reported toxoplasma-like chorioretinal scars in a significantly higher proportion of FHI patients compared to control groups.[9][10] For this reason, an etiologic association between toxoplasmosis and FHI has been investigated, however, no significant association between FHI and humoral or cellular immunity to toxoplasma has been found.[7]

Both HSV and Chikungunya virus have been linked to FHI due to the isolation of viral DNA and RNA, respectively, from the aqueous humor of patients with FHI. Currently, however, these findings are limited only to case reports.[11][12]

The strongest etiologic theories are those associating CMV and RV with FHI. CMV infection has been found to account for 16-42% of FHI in Asia, whereas in Western countries, FHI is predominantly associated with RV.[13][12][14][11] In one Chinese study, aqueous humor samples were obtained from 35 patients with presumed FHI, 15 of which were found to contain CMV DNA by PCR.[13] Aqueous humor and blood of 63 European patients with FHI were examined for RV antibodies in one of the largest series of FHI patients, all of whom were found to have intraocular antibody synthesis against RV.[15]

FHI accounts for 2-11% of all uveitides, although the actual prevalence may be higher, as the entity is probably underdiagnosed given a lack of symptoms in the majority of patients.[6][12][16][17] There is no race or sex predilection[18] and it typically manifests in early to middle adulthood. 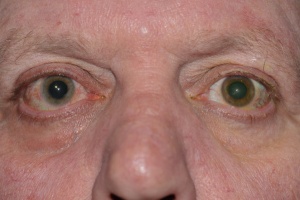 Figure 1: Iris heterochromia in a patient with Fuchs' Heterochromic Iridocyclitis. Note the lighter colored iris in the affected right eye.

Patients with FHI are often asymptomatic for many years prior to presentation as, unlike with other anterior uveitides, they typically will have no pain, redness, or photophobia. Presenting complaints are usually secondary to cataract or vitritis. Classically, patients will present with unilateral iris heterochromia and atrophy, KP, low-grade iridocyclitis, and cataract in the absence of posterior synechiae.[6][16] Only 5-10% of cases are bilateral. 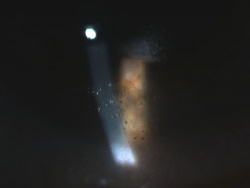 Figure 2: Keratic precipitates in a patient with Fuchs' Heterochromic Iridocyclitis.

Low-grade iridocyclitis that is not responsive to steroid therapy is a classic feature of FHI. Despite the persistent inflammation, posterior synechiae are characteristically absent. A mild vitritis with stringy vitreous is also commonly seen without the presence of cystoid macular edema.

Keratic precipitates are usually fine, stellate, and interconnected by fibrin bridges. In contrast to other types of anterior uveitides where KP tend to cluster inferiorly within Arlt’s triangle, KP in FHI tend to be diffuse, and involve the entire endothelial surface.[6]

Cataracts are seen in all types of uveitis, however, they occur with particularly high frequency in FHI. Three-quarters of lens opacities in FHI patients are posterior subcapsular.[16] FHI should be considered in the differential diagnosis of any unilateral cataract in a young patient in the absence of trauma or steroid use.

Iris nodules, particularly Koeppe and Busacca nodules, can be seen in FHI and may initially lead to a misdiagnosis of granulomatous uveitis. 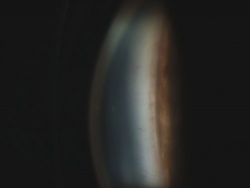 Chorioretinal scars seem to have a higher prevalence in patients with FHI versus other types of anterior uveitis, though there is still no definitive link between toxoplasmosis and FHI, as previously mentioned.

The diagnosis of FHI is based on a constellation of clinical findings, as there is no diagnostic test. Some have proposed using rubella titers, but this has not gained widespread acceptance or practice. However, workup should be performed to rule out other causes of uveitis.

When considering a diagnosis of FHI, other causes of anterior uveitis should be ruled out if possible. These include uveitis associated with herpes infection in particular, given the potentially similar presentation with iris atrophy and diffuse KP.

Posner-Schlossman Syndrome (glaucomatocyclitic crisis), characterized by recurrent, unilateral spikes in intraocular pressure which a certain degree of anterior chamber inflammation and KP, should be considered in patients with suspicion for FHI. Patients with Posner-Schlossman Syndrome can have a certain degree of iris heterochromia as well, due to the strong association with herpes. Importantly, the inflammation in this condition responds to steroids, with subsequent resolution of elevated intraocular pressure spikes.

Inflammation: Most cases of FHI do not require therapy, with patients generally having a good prognosis despite the persistent inflammation. The expected sequelae of chronic uveitis (posterior synechiae, persistent cystoid macular edema) are usually not seen in FHI. Since most of the inflammation is thought to be a result of blood aqueous barrier breakdown with resultant leakage of cells and protein, corticosteroids are generally ineffective in eliminating the low-grade anterior chamber reaction in FHI and should not be used aggressively. Some advocate a short-course of topical steroids to differentiate FHI from Posner-Schlossman syndrome, but long-term steroids are not indicated.[6][16]

Cataract: Patients with FHI have equivocal or better visual results following cataract extraction compared to other forms of chronic uveitis. Studies have shown phacoemulsification with posterior chamber intraocular lens implantation to be a safe and effective procedure in patients with FHI.[19] The peri-operative management of inflammation varies in FHI, with most surgeons placing patients on topical steroids.[6] Some clinicians even recommend pre-operative systemic steroids. Markers of severe disease, including severe iris atrophy with transillumination defects, glaucoma, and iris vasculature abnormalities, offer a more guarded post-operative prognosis.[17]

Vitreous opacification: Patients with FHI can present with vitreous floaters from inflammatory debris, most often in the anterior vitreous. Should these floaters become visually significant, pars plana vitrectomy (PPV) has been shown to be exceedingly effective in improving vision in FHI.[20] In fact, PPV had better results in FHI patients than in those with other forms of uveitis, likely as a result of the less aggressive inflammatory course and lack of cystoid macular edema in FHI.

Glaucoma is the most sight threatening and challenging complication of FHI. The prevalence of secondary glaucoma has been reported to be anywhere from 9-59% in FHI patients.[16][21] [22] [23] As is the case in primary open angle glaucoma (POAG), African Americans, as well as elderly patients may be at increased risk for developing secondary glaucoma from FHI.[24] In addition, time to diagnosis, male sex, presence of iris nodules at baseline, and the presence of a cataract (independent of age) have also been found to increase the risk for ocular hypertension and glaucoma in these patients.[25][26]

In most cases of glaucoma secondary to FHI, the etiology is thought to be similar to that of chronic open-angle glaucoma. In some cases, inflammatory debris and nodules may play a role in aqueous outflow obstruction and secondary glaucoma. Other rare mechanisms include peripheral anterior synechiae and angle closure, lens-induced glaucoma such as phacolytic glaucoma, steroid induced glaucoma, and neovascular glaucoma from iris and angle rubeosis.[22] Glaucoma in the setting of FHI is particularly recalcitrant, with 73% failing to respond to maximal medical therapy.[7] These patients often require incisional surgery.

In the management of uveitic glaucoma in general, laser therapy (trabeculoplasty, cyclophotocoagulation) is generally avoided due to inconsistent efficacy, as well as high risk for complications such as increased inflammatory response and hypotony. Incisional surgery is often more effective though surgical success rates are largely dependent upon the suppression of inflammation postoperatively. Patients with uveitic glaucoma undergoing incisional surgery often have lower rates of success compared to POAG patients due to a propensity for subconjunctival scarring, and higher rates of postoperative hypotony secondary to ciliary body dysfunction from recurrent inflammation.[27] Minimally invasive glaucoma surgeries (MIGS) are still being evaluated for use in uveitic glaucoma though preliminary data from studies treating these patients with canaloplasty and trabeculotomy, in particular, have yielded promising results. Notably, there is some concern that the narrow lumen of implantable devices such as the iStent and Xen may easily obstruct in uveitis patients due to the presence of inflammatory debris.[28] Trabeculectomy in uveitic glaucoma has been demonstrated to have limited success due to excessive scarring, with a 5 year success rate of 54% without adjuvant anti-metabolite therapy and 67% with a one-time does of 5-fluorouracil.[29][30]  As such, glaucoma drainage implant devices (e.g. Ahmed, Baerveldt, Molteno) are generally the preferred initial surgical option in any uveitic glaucoma, with first year success rates ranging from 77-94%.[31][32][33]

As mentioned, FHI is not typically characterized by severe inflammation[17][18], and outcomes for trabeculectomy and glaucoma drainage implants have been mixed. One retrospective review found that the success rate for patients with FHI-related glaucoma who underwent trabeculectomy with mitomycin C (MMC) was 90.9% and 62.3% at one and four years, respectively.[34] Success rates from a subsequent study was lower, however, reporting trabeculectomy success amongst FHI patients to be around 58% at one year.[35] This same study also showed that deep sclerectomy in FHI patients was equally efficacious compared to trabeculectomy, though did note that the rate of laser goniopuncture in this group was higher compared to other studies on deep sclerectomy.[35] Of note, in FHI-related glaucoma there appears to be no benefit to adding subconjunctival bevacizumab to the initial trabeculectomy with MMC.[36]

Contrary to uveitic glaucoma in general, studies comparing Ahmed glaucoma valves and trabeculectomy in FHI-related glaucoma do not show a clear trend toward superiority. Two retrospective studies published within one year of each other offer differing conclusions, with Esfandiari et al[37] finding that Ahmed glaucoma valves had higher success rates than trabeculectomy (85.7% with AGV compared to 41.7% with trabeculectomy), and Nilforushan et al concluding the opposite (9% with AGV compared to 76% with trabeculectomy)[38]. Given the relative paucity of FHI cases within uveitic glaucoma, it is difficult to formulate conclusions to guide treatment based on small retrospective studies. Larger studies with a longer duration of follow-up will be necessary to gain a better understanding of outcomes between glaucoma drainage implant devices and glaucoma filtering surgery in this specific patient population.