Frontocutaneous fistulas can be recognized by the following code as per the International Classification of  Diseases (ICD) nomenclature: H05.89  Other disorders of orbit, L98.8 Other specified disorders of the skin and subcutaneous tissue, M86.8X8 Other Osteomyelitis, other site

The frontal sinus is normally drained through the frontonasal duct through the frontal recess.[4] Blockage at this recess can lead to stagnant collection of nasal secretions, creating a nidus for infection. The frontal bone drains via valveless diploic veins which are in open communication with the periosteum and dura mater.[5]

Only a handful of cases of sinocutaneous fistula secondary to frontal sinus disease have been reported.[1][6] Development of Pott's puffy tumor is rare today but was a common phenomenon prior to antibiotic therapy.[7] First described by Sir Percival Pott in 1760, Pott’s puffy tumor is a subperiosteal abscess associated with underlying osteomyelitis.[8] Chronic frontal sinusitis is the most common cause. In cases of frontal sinusitis related mucoceles, it is theorized that interleukin -1 (IL-1) released from sinus epithelium induces frontal bone erosion.[9] Case reports of subcutaneous fistulas that developed after intranasal methamphetamine use,[10] prior head trauma or craniotomy, hair transplantation,[11] and ethmoid[12] or maxillary sinusitis[13] have also been reported.

Frontocutaneous fistulas most commonly harbor Streptococcal, Staphylococcal, or oral anaerobic infections, although polymicrobial infections may occur. Anaerobes are seen more often in cases with intracranial spread. Adolescents are more typically affected due to the pneumatization process and peak vascularity of the diplopic circulation.[14] However, in a case series of subcutaneous fistulas with orbital involvement, the mean age was 55 years with male predominance.[15] In another case series the mean age was 68 years with equal incidence between genders.[1]

The clinical presentation of frontocutaneous fistulas can be highly variable. Acute infection may produce more concerning signs and symptoms; patients may present with headache, fever, forehead swelling, nasal drainage, and frontal sinus tenderness. Although Pott’s puffy tumor is known to present with fullness in the forehead, this may not always be seen.[16] An acutely progressive headache, neurologic changes, and signs of increased intracranial pressure are concerning for intracranial extension. Cavernous sinus thrombosis, meningitis, and intracranial abscess may occur. Invasive infection can also progress to systemic sepsis.[17]

The ophthalmic presentation is also varied depending upon the orbital extent of the fistula. Patients may describe a history of recurrent upper lid erythema and edema over several weeks to months. Eyelid swelling and erythema may more commonly involve the medial canthal region.[16] Hypotropia may be present along with vertical diplopia. Patients may also have ptosis or proptosis with restriction in upgaze. Pre-septal and orbital cellulitis, orbital abscess or subperiosteal abscess, and optic neuritis have all been associated with chronic frontal sinusitis.[15]

Brain and sinus Computed Tomography (CT) with contrast must be emergently performed in a patient suspected to have a frontocutaneous fistula. CT provides excellent resolution of the retro-orbital tissues, globe, and sinuses to assess for bony changes.  Brain Magnetic Resonance Imaging (MRI) should be completed if there is any indication on history, exam, or CT findings of neurologic or intraorbital involvement. Severe bilateral frontal osteoneogenesis is typical in this disease and suggests chronic frontal sinus disease. Air fluid levels may be seen in the frontal sinus. All imaging studies should be carefully evaluated for subdural, epidural, or intracerebral abscesses. Cavernous sinus thrombosis may also be present. A frontocutaneous fistula can be seen as a frontal bone window defect extending into the orbital area. Care should also be taken to also evaluate any bony defects involving the posterior or inner frontal table for intracranial extension. 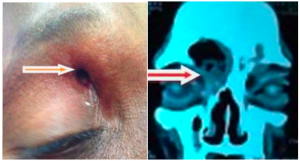 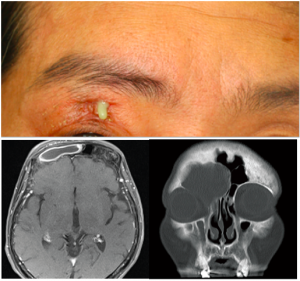 Diagnosis of frontocutaneous fistula warrants hospital admission for surgical management and intravenous antibiotics. Broad spectrum intravenous antibiotics should be initiated and then narrowed based on culture results. A prolonged course of IV antibiotics for 6-8 weeks is required. Steroid therapy with taper may also be considered. Supportive therapies such as IV hydration, saline nasal spray, nasal corticosteroids, and analgesia can be given.

Early consultation of ENT specialists for evaluation of surgical intervention is important in mitigating significant morbidity and mortality. Neurosurgery consultation is warranted if there is concern of impending intracranial involvement.

The goal of surgery is to restore long term patency of the frontal sinus outflow tract, excise the fistula tract, drain all associated abscesses, obtain samples for gram stain and culture, and remove any osteomyelitic bone. Endoscopic sinus surgery remains the gold standard for treatment of chronic sinusitis. The frontal sinus drainage pathway may also be opened via an endoscopic frontal sinusotomy with or without frontal sinus trephination.[16] A silicone frontal sinus stent can be placed at time of surgery to assist with drainage. Aggressive debridement and evacuation of either sinus, subperiosteal, or intracranial abscess may be done. Depending on the depth of infected frontal bone, craniectomy with bony reconstruction can be considered to prevent recurrence and delayed mucocele formation. Induration of subcutaneous tissues around the ostium of the fistula may mimic malignancy, thus biopsy can be considered in some cases.

Follow up imaging is recommended to ensure disease does not recur and MRI is often preferred. Clinical course may be variable. Some authors report symptom recurrence weeks after treatment and may even occur up to six months to one year after surgery.[1][17]

Prognosis depends on early detection and treatment. Ophthalmic presentations of eyelid swelling and orbital signs may not obviously point to an underlying sinus pathology and delayed diagnosis may easily lead to inappropriate management. One study found that 47% of ophthalmologists misdiagnosed a frontal sinus mucocele leading to orbital disease and that average time to correct diagnosis averaged 53 weeks.[16] This suggests an under- recognition of non-ophthalmologic causes of eyelid swelling, such as sinus disease. Thus rapid recognition, imaging, and treatment of this rare but important clinical entity are crucial to preserving vision and avoiding significant neurologic complications, morbidity, or mortality.