Focal choroidal excavation (FCE) is a newly recognized clinical entity that is often incidentally found, and presents asymptomatic or with mildly decreased visual acuity in the affected eye. It has characteristic findings on optical coherence tomography (OCT) that can be used to distinguish it from other retinal lesions that may appear similar on ophthalmoscopy.

Focal choroidal excavation (FCE) is a recently characterized clinical entity first described by Jampol in 2006 and coined as a term by Margolis in 2011.[1][2] FCE refers to a concavity of the choroid without local scleral changes that is often identified through a characteristic appearance on optical coherence tomography (OCT).[1] This finding usually presents unilaterally and is found incidentally on exam, though exceptions to these patterns have been reported.[3] The majority of FCE are thought to be congenital; however, the etiopathology of FCE remains a subject of active investigation. While most instances of FCE remain relatively stable over time and are managed with close observation, several complications requiring intervention, such as choroidal neovascularization and serous detachment, have been described.

The diagnosis and clinical characterization of FCE has been described through the use of optical coherence tomography (OCT). Several classification schemes have been suggested in the literature and used for categorizing FCE.

The most commonly used classification system for FCE has been to define them as either: (1) conforming, where there is no separation between photoreceptor outer segments and the retinal pigment epithelium (RPE), and (2) non-conforming, where a space is identified between the two.[2] In non-conforming FCE, the space between photoreceptors and RPE may contain heterogenous hyperreflective material, which has been attributed to inflammatory cells or degenerative debris.[2][4]

Shinojima et al. have developed a classification scheme for FCE based on shape of the choroidal concavity itself, categorizing lesions as: (1) cone-shaped (2) bowl-shaped, or (3) mixed morphology.[4] In their cohort, cone-shaped was the most common morphology, and bowl-shaped morphology was associated with RPE irregularities within the area of FCE, detected on indocyanine green angiography (ICGA).

The precise etiopathology of FCE remains to date unclear. It has been suggested that the clinical entity may represent a common morphological manifestation of multiple processes, which may be either congenital or secondarily acquired.[6]

Congenital FCE are thought to be mostly stationary and not likely to be vision threatening, while secondary FCE may be related to a variety of conditions — including pachychoroid disease, chorioretinal inflammation, retinal dystrophies, and malignancy — which may require treatment to prevent complications and disease progression.[7] In one study of patients aged <40 years old, only 3/1697 (0.18%) of eyes examined were found to have an FCE.[8]

FCE has been associated with myopia, as well as pathology along the pachychoroid spectrum, most prominently with central serous chorioretinopathy (CSCR) and polypoidal choroidal vasculopathy.[6] In one review, areas of choroidal thickening and dilated choroidal vessels were identified in the eyes of patients with FCE, even if they did not meet the requirements for diagnosis of a pachychoroid spectrum disorder. The entity has also been described more frequently in women than men, and more often in Asian populations, though the robustness of these associations remains unclear.[9]

Additionally, case reports have described FCE in patients with a wide variety of pathologies. Age-related macular degeneration (AMD), for example, has been identified as a potential correlate of FCE, and some authors have investigated the potential link between the choroidal neovascularization characteristic of wet AMD, and the choroidal abnormalities seen in FCE.[10][11] Other authors have suggested a link between the bestrophinopathies and FCE, with one study identifying FCE in 6% (2/33) of eyes with Best disease.[3]

Infectious and inflammatory processes may also be linked with FCE — Epstein-Barr virus (EBV) infection and multiple evanescent white dot syndrome (MEWDS) have both been described in association with FCE.[12][13]

As more patients are imaged with advanced posterior segment OCT, a more complete understanding of the clinical picture surrounding FCE is likely to emerge.

The functional ophthalmic exam may reveal reduced visual acuity in the affected eye, or may be within normal limits. Posterior segment exam may reveal a focal yellowish lesion that is often either foveal or parafoveal. 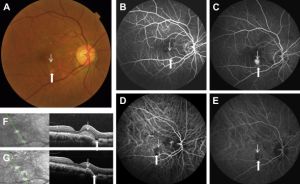 Color fundus photography is useful for documenting any findings that may have been detected on posterior segment examination, and also for co-localization with other imaging modalities. Careful fundus drawing from clinical examination may also be used to serve an equivalent clinical role. To assess RPE health in association with a suspected FCE, fundus autofluorescence imaging may be useful.[2]

High resolution OCT remains the gold standard for diagnosis of FCE . While the first descriptions of FCE were made using time-domain OCT, spectral domain, enhanced depth, and swept-source OCT have been employed with great success for improved resolution and improved ability to evaluate underlying sclera and deep choroidal layers.[2][16][17]

Angiography should be utilized to assess for choroidal neovascular membrane as well as RPE degeneration that might portend a worse visual outcome. Both indocyanine green angiography (ICGA) as well as fluorescein angiography (FA) have been previously utilized.[17] OCT angiography (OCTA) may also be useful in the further evaluation of FCE-related vascular changes, especially if there is suspected associated neovascularization.[18]

In the setting where full evaluation of the underlying sclera architecture may not be possible or findings may be difficult to interpret secondary to various imaging artifacts, contact b-scan ultrasonography may be employed.[2]

The differential diagnosis of FCE can be broken down by anatomical location and testing. In the outermost layer, scleral thinning and ectasia — as with a posterior staphyloma — may cause changes to the topology of the associated choroid and can appear similar to FCE, though the margins of the lesion may have a more gradual slope.[6]

Moving inward, conditions with choroidal thinning may present with imaging findings that could be mistaken for FCE.[6] On ultrasonography, uveal tumors might appear similarly to FCE, as they will both have low acoustic reflectivity and appear as dark areas near the posterior pole. However, on OCT, uveal tumors are easily distinguishable from FCE.[19]

In cases of asymptomatic FCE without associated choroidal neovascular changes, observation without treatment is recommended.[20] A slow increase in concavity size on OCT may be observed, but changes to concavity size might also be noted due to unavoidable variability in imaging modality such as slice orientation. Some authors have postulated that focal scar contraction and maturation may be responsible for the slow progression in concavity size observed in patients over time.[8]

If there is evidence of lesion expansion or scleral thickening, a full evaluation for secondary causes of FCE should be undertaken to determine if any underlying process can be directly treated. For scleral thinning, surgical reinforcement of the sclera can be considered.

Additional complications may arise that require treatment, including secondary neovascularization and/or serous retinal detachment. If encountered, these may be managed depending on lesion location and sequelae, with anti-VEGF agents, verteporfin photodynamic therapy, or focal laser photocoagulation.[21][22][23][24]

Several case reports have described a relatively stable course for FCE, whether symptomatic or asymptomatic.[25] After initial evaluation for associated choroidal neovascular changes and secondary causes of FCE, it is appropriate to counsel patients with current data on the natural history of this finding. If patients develop complications of FCE such as neovascular choroidal changes or serous detachment, these should be treated accordingly.