Flap striae are a common consequence of LASIK surgery. Often striae are small and asymptomatic, but occasionally they can produce significant visual complaints, usually when the folds are large or involve the visual axis. When striae cause visual symptoms, treatment is indicated. Striae detected early can often be manipulated, usually by simply lifting the flap, rehydrating and restretching. Persistent striae, or those that develop months of years after surgery, usually require more invasive measures. Of these, the best option is considered to be PTK. In cases of striae resistant to even PTK, PRK has been successful.

Flap striae are defined as small wrinkles or folds in the cornea as a result of LASIK surgery.[1]

The most common classification of flap striae divides them broadly based on their size. Microstriae are microscopic, superficial wrinkles that are generally asymptomatic and often only detectable on microscopic examination of the cornea. They are thought to only involve Bowman’s layer and/or the corneal epithelial basement membrane. Macrostriae are larger, full thickness folds in the cornea that usually cause noticeable visual impairment and often require surgical intervention.

Some have suggested that flap striae can further be divided into subtypes based on location, severity and thickness. This classification system has five categories: loose epithelium/pseudostriae, hinge ridge striae, hinge fold striae, deep stromal striae and deep epithelium striae.

Others suggest classifying striae based simply on treatment; those that do not require surgical intervention and those that do.[2] 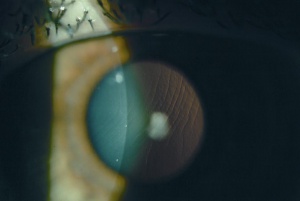 Flap striae arise when the flap slips or wrinkles after LASIK surgery. This usually occurs as the result of uneven alignment of the flap edge with the epithelial ring. It is believed the mismatch in the curvature of the unaltered posterior flap and the newly altered stromal bed is the primary reason for this misalignment. The altered central convexity of the stroma can lead to flap redundancy that is difficult to completely flatten, which has been referred to as the “tenting effect”.[4] This might explain why there is a positive correlation between the magnitude of ablation and the incidence of striae.

Striae are a common cause of post-LASIK complications. It is estimated the overall incidence of striae is extremely high after LASIK; confocal microscopy reveals folds in the superficial layers in over 97% of cases.[5] However, the vast majority of these cases are asymptomatic and detectable only on microscopic exam; the incidence of clinically significant striae requiring treatment is much lower, between 0.2% and 1.5%.[6]

There is a direct correlation between the degree of refractive correction and the occurrence of mircrostriae.[7] Thinner flaps seem to be at increased risk of developing striae.[8] There is some suggestion that patients with a history of diffuse lamellar keratitis (DLK) are at an increased risk for developing striae, perhaps because of microscopic corneal scarring as a result of the DLK.[9]  Long ablations also have a higher risk of developing significant striae, most likely due to the dehydration effect. The incidence of flap striae seems similar in microkeratomes and femtoseconds flaps[10].

Macrostriae are easily detected on slit-lamp examination. Microstriae can be visualized with sodium fluorescein, manifesting as negative staining lines.

As striae are a very common occurrence after LASIK, it can sometimes be difficult to determine whether post-LASIK visual complaints are related to striae, or whether there is a additional process at work.

In more difficult cases, a Maddox rod can be used to confirm the role the striae play in a patient’s visual complaint. The thought is that the striae are the equivalent of the cylindrical corrugations in the Maddox rod lens, and clinically significant striae will cause the patient to experience visual symptoms normally only induced by the Mattox rod test.[2]

Early recognition and treatment of clinically significant striae is associated with better visual outcomes and reduced risk of developing fixed folds, which likely occur when epithelial cells are allowed to infiltrate into the crevices.[4]

Management of flap striae ranges from stroking the folded flap with a moist sponge to suturing to surgical intervention.

For striae noted in the early postoperative period, the best approach is to lift and hydrate the flap and then stretch it back into position.[13] Early striae can also be flattened with microsponges Flattening can be performed at the slit lamp or under the operating microscope by applying gentle pressure to the fold.[14]

Folds that do not respond to flattening will need more aggressive intervention. Many suggest the next step is to debride the epithelium overlying the striae, then rehydrate the flap with balanced salt solution and stretch the flap into position.[15]

Persistent flap striae refractive to less invasive corrections can be sutured into place; the idea being that prolonged mechanical stretching of the flap by the sutures will eliminate the striae and prevent their recurrence.[9] This method is usually effective at eliminating the offending striae, however there are some complications associated with suturing. These include the formation of new striae in the opposite direction due to the pulling force of the suture, as well as irregular astigmatism. For this reason suturing has somewhat fallen out of favor.

The Donnenfeld method of hyperthermic ironing has also been used to treat persistent striae. In a study of 36 eyes with persistent flap striae, heated spatulas were applied to the surface of the flap and the folds were essentially “ironed” into place and held there with warm water and warm instrument massage for five to 10 minutes. All patients in the study were symptom free at six-month follow-up examination, but recurrence was noted with longer follow-up.[16]

Steinert developed a standardized phototherapeutic keratectomy (PTK) treatment protocol for flap striae that is highly effective, and has become the standard treatment for refractive striae. The protocol consists of transepithelial PTK standardized to 200 pulses, and then a variable amount of additional pulses with masking fluid, which is not to exceed 100 pulses, for a total of 300 maximum pulses. The second phase consists of applying the masking fluid with a surgical spear sponge, then delivering 5-8 pulses, and rewiping and repeating, continuing until striae become invisible or the 300 maximum pulse limit is achieved. Postoperative treatment includes bandage contact lenses, prednisolone and antibiotic drops for 5 days.[9]

Striae are challenging to prevent. Suggestions for reducing the incidence of flap striae revolve around careful, precise repositioning of the flap and early monitoring of the flap to ensure good position.

Surgical landmarks that straddle the flap edge allow for accurate repositioning of the flap. Examination of the flap at 20 minutes postoperatively is recommended to ensure the flap has not slipped out of position. There should be even distribution between the flap edge and the peripheral epithelial ring.