Dog bites are common presenting complaints in pediatric and adult emergency rooms. They tend to occur preferentially in young children and are relatively common in the face and periocular region, causing a diverse set of injuries including eyelid lacerations, canalicular trauma, and more rarely open globe and orbital fractures. Infection is rare but potentially devastating complication. Management varies by extent of injury but mainly focuses on infection prevention and cosmetic reconstruction.

Dog bites occur in over 1 million Americans a year with over 300,000 emergency room visits and resulting in significant morbidity and even mortality. The majority of the bites occur on the dog owner's property and most of those bitten are children. Periocular injuries are common with dog bites, particularly from pit bulls. These injuries can result in a diverse set of periocular complications including damage to the canaliculi, facial nerve, levator muscle, lacrimal gland, rectus muscles, bony orbit and globe [1]. [2], [3]. Management of dog bites in the periocular location has some distinct considerations which will be discussed below.

Traumatic injury from bite of any variety of Canis lupus familiaris or Canis familiaris. Damage from dog bites include abrasion, puncture, laceration, avulsion and crush injury [4], however most bites are combination of these mechanisms, with crush and laceration being the most common features. Particularly high risk breeds include German Shepard, Doberman, [5] and Pitt Bull Terrier.[6] In young children, most dog bites are perpetrated by dogs familiar to the patient and their family and often occur during seemingly positive, self-initiated interactions. [7] In older children and adults, bites are often sustained by an unfamiliar dog with which they are not voluntarily interaction. Dogs predilection to attack the central area of the face expalins the periocular injuries seen in up to 17% of cases.[8][9]

Risk factors for dog bites include young age (nearly ¾ of victims are younger than 9 years old [5]), male sex [10], and attention deficit hyperactivity disorder [11]. Younger children are at increased risk for facial involvement due to small stature and underdeveloped motor skills. Other risk factors include injured/ill dog or a dog which feels threatened.

Over 50% of Americans have at least one dog in their home and over one million Americans are bit by dogs yearly. Nearly 20% require medical attention [CDC], accounting for approximately 1% of emergency department visits per year and these attacks result in over $100 million in medical bills each year [12]. According to estimates, over 50% of children are bitten by a dog at some point in their lives. [13], [14] The ocular and periocular tissue are affected in 4% to 17% of cases [15].

Reporting of animal bites to officials is optional, with officials being notified in only 20% of incidents. [16] Nearly 50% of dogs involved in periocular dog bites are euthanized, with nearly 60% of those that were not euthanized biting again over the course of 3 years [17].

Overall rates of soft tissue infection after dog bites to the head and neck are less than 5% in most major studies [18]. The relatively low risk of infection in this area is attributable to rich vascular supply to the area which increases the rate of healing but can also predispose to catastrophic blood born infection in cases in which infection does occur. Infections can partially be attributed to the valveless venous supply to the face which communicates with the skull base, allowing potential pathogens direct access to the intracranial space. The over 64 species of bacteria found in a canine mouth include aerobic and anaerobic bacteria. Soft tissue infections are classically polymicrobial in nature with a high preponderance of anaerobic organisms [19]. Common orgnaisms include Pastruella, Streptococi, Staphylococci, Moraxella, Corynebacterium and Neisseria [20]. Two especially concerning species, due to potential antibiotic resistance and aggressive nature include Pasteurella multocida, which causes intense pain and abscess formation, and Capnocytopnaga canimorsus (formerly known as group DF-2) which can result in a necrotizing infection and fulminant sepsis [21].

The Lackmann classification has been utilized to grade the level of damage from dog bites.[22] 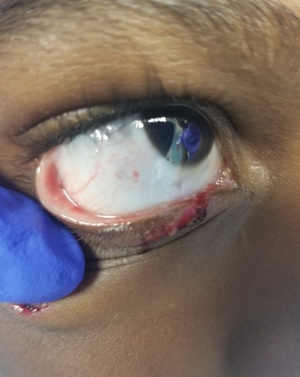 Evaluation of any patient with a dog bite injury beings with complete physical exam to rule out not only periocular involvement but any life-threatening injuries. Most injuries will present with at least two puncture wounds representing upper and lower incisors (Figure 1).

Given the high risk for canalicular involvement in eyelid lacerations caused by dog bites, medial eyelid lacerations should be appropriately explored for canalicular involvement [20]. In addition, a high suspicion for orbital fractures should be kept in the case of extensive wounds and/or puncture wounds in the maxillary/ malar area [23], and these patients should undergo diagnostic maxillofacial CT scan.

General principles of management of dog bites includes management of any life-threatening injuries first, followed by disinfection, exploration and wound closure. Initial surgical management focuses on simple wound closure with the opportunity for second stage procedures at a later time [24]. In all injuries listed below, technique of repair does not differ from traditional methods.

Infection is a serious concern after dog bite injuries. Management of infection risk

Thorough irrigation can decrease the risk of infection by up to 90% [25]. The suggested technique is using a 30 mL syringe with an 18G catheter or needle to create a forceful stream [26]. A total volume of at least 150 mL is recommended. Povidone-Iodine irrigation is potentially useful in high risk puncture wounds but can otherwise slow wound healing and is not generally recommended [27].

Judicial debridement can decrease the risk of infection, particularly in high risk crush and puncture wounds [24].

Early closure of wounds of the head and neck is recommended and does not seem to[28] increase the risk of infection, as has been suggested in extremity wounds, for example [29]. On the other hand, postponing wound closure by up to 24 hours (such as overnight) does not appear to increase infection rates as long as prophylactic antibiotics are instituted promptly on presentation [30].

Use of prophylactic antibiotics is recommended in high risk situations such as deep tissue involvement, bone involvement (including orbital fractures), crush injuries or in patients with immunocompromise, however is controversial in the case of minor injuries. Amoxicillin/ Clavulanate for 3-5 days is first line. Options for patients with penicillin allergy include trimethoprim/ sulfamethoxazole, clindamycin, ciprofloxacin or azithromycin. Longer antibiotic treatment is indicated in the setting of active infection.

Rabies is extremely rare in the United States due to mass canine vaccinations since 1948. Rabies vaccination and immunoglobulin are only recommended in cases in which there is a high suspicion for infection of the attacking animal.

Tetanus spores are relatively common in dog feces and can lie dormant for months. Tetanus vaccination with immunoglobulin is recommended in all patients with an unknown vaccination history, immunocompromise or those who have not received the initial three doses primarily [30].

Open globe injury from dog bites is rare, with only a few case reports in the literature [31]. The low prevalence of ocular injury is attributed to blink reflex which protects the globe. In two other cases, it appears that a distant site (in one case in the cranium [32], in the other on the cheek [1]) acts as a fulcrum for the superior canine jaw, allowing the lower jaw to enter the orbit, usually inferomedially.

Canalicular lacerations are common injuries from periocular dog bites. One group suggested a higher rate of canalicular injury in eyelid lacerations due to dog bites compared to those by alternative mechanisms [20]. This is most likely due stretching of the eyelid resulting in shear forces at the canaliculus which has been found to be the weakest point of the eyelid [33] or due to puncture wounds in this area [20]. Repair with silicone intubation is indicated.

Orbital fracture are a relatively rare outcome of dog bites, with most sources stating the incidence to be less than 5%. Risk factors include age < 2 years, large dogs and severe bites. The most commonly involved bones are nasal, maxillary and orbital bones and mechanisms include blunt force and puncture wounds [23]. It has been suggested that dog bites causing facial fractures are more likely to involve the nasal bones/ periorbital area [23].

Prognosis depends on extent and mechanism of injury.