Corneal transplantation is a widely practiced surgical procedure. Over the past decade, lamellar techniques have been developed to replace penetrating keratoplasty (PK) [1] . Endothelial Keratoplasty (EK) has been adapted as an alternative in the treatment of corneal endothelial disorders. [2] In the various forms of endokeratoplasty, Descemet’s membrane and the endothelium are replaced, with or without a varying amount of corneal stroma. [3]

In Descemet’s stripping endothelial keratoplasty (DSEK), the patient’s Descemet membrane is peeled off, using specially designed strippers [4] and replaced with a partial thickness graft: a transplanted disc of Posterior Stroma, Descemet and Endothelium (10-30 % of the inner donor cornea). Both donor and host cornea are manually dissected. Differently, in Descemet’s stripping automated endothelial keratoplasty (DSAEK) the donor dissection is carried out using a mechanical microkeratome. DSAEK is described as the procedure of choice for corneal endothelial failure in many centers. [4]

DSEK is intended to transplant a healthy endothelial cell layer that will pump the fluid out of the cornea. It’s expected to restore corneal clarity and improve vision. [5] This procedure corrects corneal endothelium failure, but is not able to correct corneal scarring, thinning or surface irregularity.

Not all patients with corneal pathology are candidates for DSEK. The indication depends on decreased vision related to corneal swelling from poorly functioning endothelium. The main indications are:

The ideal time to perform DSEK to prevent permanent change is unclear. However, accordingly to a recent study [6] early DSEK influences visual outcomes in Pseudophakic Corneal Edema. There is a significant relationship between Cataract Extraction to DSEK time and Best Spectacle Corrected Visual Acuity. Performing earlier (<6 M) DSEK for pseudophakic corneal edema appears to be associated with improved visual outcomes. [6]

This procedure, which takes approximately 45 min, is done under local or general anesthesia. First the endothelium and Descemet’s membrane of the cornea is stripped away through a corneal incision. Then a circular disc is removed from the inner lining of a donor cornea. This thin layer is then transplanted into the recipient eye and attached to the posterior cornea of the recipient. [5]

Donor tissue preparation: Corneoscleral buttons are excised from donor globes and stored by organ culture. Each globe is mounted on a purpose-designed holder and the anterior chamber is filled with air to create an air-endothelium interface. With dissection spatulas, a manual stromal dissection is made at approximately 95% stromal depth using air-to-endothelium reflex to monitor dissection depth. Stromal dissection is extended up to limbus over 360 degrees. After dissection is completed, a 16.0 mm corneoscleral rim is excised from each globe and the endothelium is evaluated with an inverted light microscope and stored in organ culture until time of transplantation. [7]

Surgical technique: With a reverse Sinskey hook, a circular portion of Descemet membrane is scored and stripped from the posterior stroma so a descemetorhexis is created and the central portion of Descemet membrane is removed from the eye. A temporal self-sealing 5.0 mm sclerocorneal incision is created with a crescent knife. After trephinating an 7.5 to 9.0 mm diameter DSEK-graft from the predissected corneoscleral rim, the tissue is often stained with Trypan Blue. The graft can be inserted with a wide variety of techniques. Irrigating inserters, push-through and pull through techniques exist. Irrigating inserters rely on the adhesion between the insertion platform and the posterior stromal surface as the insertion platform gently springs open in the anterior chamber. Push-through techniques rely on forceps, hooks bent-needles and glides to slide a graft into the anterior chamber, usually on a film of viscoelastic. Pull-through techniques is a two-handed maneuver employing specialized forceps or suture position on the opposite side of the main wound to draw the donor disc into the anterior chamber, with or without a glide. Finally, a manual folding forceps insertion technique requires the surgeon to fold the graft in a 60%/40% ratio, like a taco, and carefully insert and rotate the graft to the appropriate position. [8] . If a glide is used for insertion, it is removed from the main wound, and the DSEK graft is unfolded in the recipient anterior chamber, taking care to avoid excessive touch between the donor endothelium and the underlying iris and lens. Balanced salt solution, an air bubble, or instrument manipulation may be used to assist in the unfolding of the graft. After unfolding, the graft is positioned against the posterior stroma of the host using a small air bubble. The DSEK graft is then carefully positioned centrally using a variety of brushing, tapping , sweeping and dragging techniques. After the DSEK graft is positioned centrally, the anterior chamber is completely filled with air. [7]. Dilating drops may be used to prevent any pupillary block from air bubble. Peripheral iridotomies can also be performed to reduce the chance of pupillary block. Once the donor disc is in tight apposition with no or minimal interface fluid between the donor and the recipient stroma, the surgeon partially removes the air in the anterior chamber and replaces it with BSS. An air bubble of approximately 8 to 9 mm is usually left in place to help further stabilize the donor disc position over the first 24 hours postoperatively. [9] The air bubble pushes the graft in place until it heals in an appropriate position, giving time for the pumping action of endothelium to help the donor tissue bind to its new host [10]. The structure of the cornea remains intact.

After the surgery, the patient lies in a supine position, flat, facing the ceiling, for the first hour after surgery and then as much as possible to allow the retained air bubble to further stabilize the graft position, but this is not critical. The patient is discharged following this outpatient procedure when fully recovered from the anesthesia. [9]

Postoperative care should include broad-spectrum antibiotics to prevent infection and steroids (initially dexamethasone, then fluorometholone) to prevent rejection. [7] Patient should lie in the supine position for one more day after DSEK (to utilize the residual air bubble in the anterior chamber) and to not rub their eye for 2 weeks after DSEK surgery. [9] 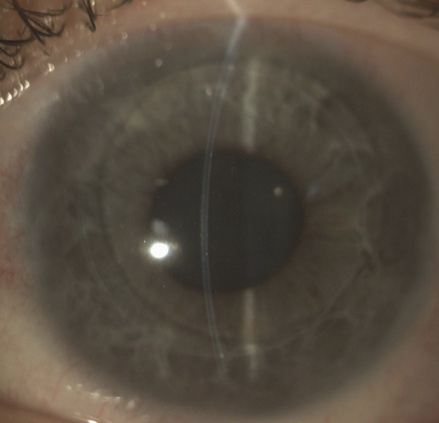 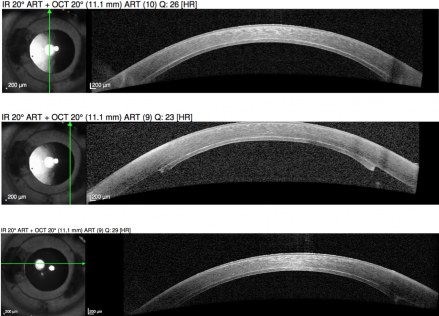 Even though DSEK/DSAEK may be the current standard, the newer partial thickness Descemet’s Membrane Endothelial Keratoplasty may have better clinical outcomes and may also require less investment in preparation of isolated Descemet grafts. A study [14] compared outcomes after DMEK and DSEK during the surgeon’s DMEK learning curve and there was some evidence of improved visual acuity outcomes in DMEK. They observed worse 6-month endothelial cell loss among DMEK patients, however this may improve with surgeon experience. So corneal surgeons may consider “to make the switch” to DMEK. [2]