Cystinosis is a rare lysosomal storage disease in which cystine accumulates in organs and tissues throughout the body. Although renal disease predominates in the early forms of cystinosis, all forms of the disease can result in ophthalmic sequelae, particularly pigmented retinopathy and deposition of cystine crystals in the cornea, with associated photophobia and visual impairment. Patients should be followed closely by nephrology and other specialists in order to manage life threatening renal disease and extra-renal symptoms, but also need regular ophthalmologic evaluation to determine the extent of ocular disease and manage pathology appropriately. The early and late forms of ocular disease can both be treated with cysteamine eye drops to halt progression of ocular manifestations and diminish the presence of cystine crystals in the cornea. Oral cysteamine therapy may decrease the occurrence of retinopathy.

There are three main forms of the disease which are categorized as infantile, juvenile, and adult cystinosis. The most commonly diagnosed form of cystinosis is the infantile, or nephropathic form, which has been shown to have an incidence of 1 in every 100,000 to 200,000 children.[1] The adult, non-nephropathic, ocular form of cystinosis is less frequently encountered, but is thought to be more prevalent than documented as it is usually discovered incidentally during ophthalmologic examination, and thus, may otherwise remain undiagnosed.

In healthy individuals, the amino acid cystine is the byproduct of protein metabolism within lysosomes. It is typically transported out of the lysosome by a membrane transport protein known as cystinosin. A genetic defect in cystinosin results in the accumulation of lysosomal cystine, and subsequent cystine deposition within tissues. The build up of cystine within cells leads to crystal formation, and resultant organ damage, which occurs most prominently in the kidneys, leading to early renal failure. However, as noted above, crystals can form in other organs including the liver, thyroid, pancreas, muscle, brain, and eyes[2].

Cystinosis is inherited in an autosomal recessive fashion. A mutation in the CTNS gene on chromosome 17p13 results in dysfunction of the lysosomal membrane transport protein cystinosin.[3] Over 100 different mutations are known to cause cystinosis, all with variable clinical presentations.[4][5]

Ophthalmologists can play an important role in the diagnosis of cystinosis, as one of the three main diagnostic criteria is the finding of corneal crystals on slit lamp exam. Cystinosis may also be diagnosed by genetic testing for the CTNS mutation, or by elevated leukocyte cystine content.[2]

The most common symptom of cystine accumulation in the structures of the eye is photophobia, although other symptoms such as foreign body sensation, visual impairment, and blepharospasm can be present and confound the picture, as these can be symptoms of congenital glaucoma.[6] Structure-specific involvement is described below: 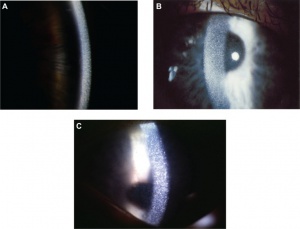 Individuals with infantile cystinosis previously did not survive beyond the first or second decade of life, but with advancements in renal dialysis, kidney transplantation, and pharmacologic treatment, individuals are now surviving well into adulthood.[15] The most effective medical treatment for cystinosis is the use of cysteamine, a cystine-depleting drug that acts within the lysosomes of cells and converts accumulated cystine into a form that can be easily excreted from the lysosome in the absence of functional cystinosin. Some hospitals have started multi-disciplinary cystinosis clinics in an effort to approach the disease in a more collaborative way.[16]

Treatment with oral cysteamine is started as soon as possible after the diagnosis of infantile or juvenile cystinosis. Early intervention is shown to improve renal function, decrease growth restriction, and prevent hypothyroidism.[17] Oral cysteamine also appears to decrease retinopathy, evidenced by data showing that the fraction of patients with retinopathy decreased proportionately to the length of time spent receiving cysteamine therapy.[10]

While oral therapy proves helpful in diminishing retinopathy, the lack of vasculature in the cornea makes systemic therapy ineffective in this location. As a result, a topical formulation of cysteamine was developed to target corneal cystine crystal deposition. Cysteamine eye drops have since been proven to decrease corneal crystal deposition if used every 1-2 hours throughout the day.[18][19][20][21] Topical cysteamine drops also have the disadvantage of needing to be kept cool and used within a week of opening. These issues make treatment adherence very difficult, especially in the youngest patients, and may also negatively impact patient quality of life. Recent advances in pharmacology have resulted in more stable cysteamine preparations and also a new gel form of topical treatment that requires decreased dosing with similar or possibly improved efficacy when compared to currently available treatments.[22][23][24]

Cystinosis is an autosomal recessive lysosomal storage disorder that results in the accumulation of the amino acid cystine crystals in many organs throughout the body. Renal damage is prominent in the early forms of cystinosis, but ocular involvement is present in all forms of the disease. Ophthalmic manifestations of all 3 types of cystinosis include crystal deposition in the cornea, conjunctiva, iris, lens, choroid, and retina with early development of pigmented retinopathy and the extent of corneal crystals related to age of onset and the use of disease modifying medications. Topical cysteamine is the treatment of choice for ophthalmologic management, and can effectively reduce corneal cystine crystal accumulation and alleviate symptoms such as photophobia. Ophthalmologic surveillance and management of cystinosis is important in order to monitor disease progression and prevent late visual complications of untreated cystine accumulation.

The Cystinosis Foundation is a non-profit organization with more than 30 years of International experience in supporting and educating families and the medical community through the dissemination of educational literature, funding research, and annual conferences.

The Cystinosis Research Network is an all-volunteer, non-profit organization dedicated to supporting and advocating research, providing family assistance and educating the public and medical communities about cystinosis.

The mission of the Cystinosis Research Foundation is to support bench and clinical research that is focused on developing improved treatments and a cure for cystinosis.