Cysticercosis of the Eye 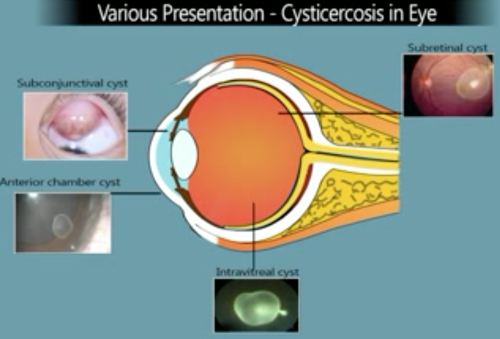 Cysticercosis is a parasitic infection caused by the larval form of the cestode, Taenia solium (T. solium), also known as a pork tapeworm.[1]

Other parasites causing Taeniasis in human includes Taenia saginata and Taenia asiatica, though Taenia solium is the major cause of human disease.

Cysticercosis affects various parts of the body. When it affects the central nervous system, it is called neurocysticercosis (NCC) and often leads to seizures and epilepsy.[2] In fact, NCC is the leading cause of adult onset epilepsy in the world.[1] In addition to NCC, ocular or orbital cysticercosis can also occur.[3]

Orbital/ocular cysticercosis (OOC) is a preventable cause of blindness.[3] The larval form of T. solium that causes OOC is Cysticercus cellulosae.[3] The disease affects thousands of people in developing nations.

OOC can result in a number of manifestations depending on the location of the cysts. The ocular adnexa have been noted to be the most common site of disease in India.[4][5][6] Although OCC is less common in the Western world, the posterior segment of the eye is one of the most common sites of infection. Kruger-Leite et al reported that 35% of the cysts were found in the subretinal space, 22% in the vitreous, 22% in the subconjunctival space, 5% in the anterior segment, and only 1% in the orbit.[7]

When the extraocular muscles are involved, the superior rectus is the most common.[8] The cyst may reach the subconjunctival space from the adjacent muscles.

As noted above, cysticercosis is caused by the cestode Taenia solium. Infection of this parasitic occurs when humans ingest the eggs of the cestode through three possible sources:

After humans ingest the eggs, the eggs lose their protective capsule secondary to exposure to gastric acid. The eggs mature into larvae which migrate in the bloodstream and eventually penetrate tissues such as the brain, eye, and striated muscle.[11]

NCC and OOC are endemic in areas of poor sanitation, such as Southeast Asia, the Indian subcontinent, Latin America, and Africa.[11] The World Health Organization (WHO) has deemed NCC a major public health concern and a cause of epilepsy.[12] The Center for Disease Control (CDC) has named NCC a Neglected Parasitic Infection.[1] NCC has less commonly been found in the Western world. Most people in the United States (US) who are infected with the parasite emigrated from Latin America. Due to the increase in immigrants from Latin America, the number of cases of Cysticercosis in the US is rising. There are about 1000 new hospitalizations for NCC in the US yearly.[1] In fact, 10 percent of emergency room visits for seizures in the Southwestern US are from Cysticercosis.[13] OCC accounts for 75-85% of cases of Cysticercosis in the world.[14]

History may include the patient or patient’ family member traveling to or residing in an endemic country for cysticercosis. Depending on the location of the cyst, the symptoms vary which include poor vision, redness of the eye/s, ocular pain, swelling, and reduced ocular movements.

An 8-point eye exam should be performed in every patient presenting for ophthalmological evaluation. Physical exam findings will vary depending on cyst location. Notable findings from the 8-point eye exam may include:

Visual acuity may or may not be decreased. Severity will vary depending on cyst location and level of inflammatory response.

If the cyst is located in the anterior chamber, pupillary block may occur, leading to glaucoma.[15]

The conjunctiva and sclera may appear red. If the cyst is located in the subconjunctival space, a bulging red or yellow nodular mass may be seen. In orbital cysticercosis, patients may present with proptosis, lid swelling, and ophthalmoplegia . The cyst could also lodge in any of the extraocular muscles, usually the superior rectus.

If the parasite is still alive, the cyst measures between 1.5 and 6 disc diameters and might undulate under the examining light.[16]

The cyst could be present in the vitreous, or may be intra or subretinal. It is believed that the cyst reaches the vitreous cavity from the choroidal circulation and migrates transretinally. As the organism moves in the retina it can cause exudative or rhegmatogeous retinal detachment. Though optic nerve involvement is rare, the nerve can be compressed by the cyst, leading to optic disc edema seen on fundocsopy.[10]

Clinical, serological, and radiological examinations are needed to diagnose NCC or OCC.

Laboratory evaluations include CBC, demonstrating leukocytosis with eosinophilia.[18] For patients presenting with new-onset seizure from NCC, imaging and cerebrospinal fluid analysis should be performed. Serologic tests such as enzyme-linked immunosorbent assay (ELISA) can be performed. Studies would reveal antibodies against excretory secretory antigens (IgG). However, serologic studies have been found to have low sensitivity in diagnosing cysticercosis.[19]

Imaging studies, such as B-scan ultrasonography, computed tomography (CT), magnetic resonance imaging (MRI) are most helpful in providing a definitive diagnosis. Ultrasonographic findings will reveal a well-defined cyst in the orbit with a hyperechoic scolex.[20] Ultrasound is not only useful for diagnosis of the disease, but also for monitoring of treatment. CT scan will reveal a hypoechoic mass with central hyper-density and adjacent soft tissue inflammation. The central hyper-density, the scolex, may not be identifiable if the cyst is dead and there is surrounding edema.[11] MRI will reveal a hypo-intense cystic lesion and hyper-intense scolex. The inflammation caused by the cyst degeneration leads to enhancement on CT and MRI.[2]

Findings on CT would be similar for NCC. Lesions are hypodense and non-enhancing. If the parasite has died, parenchymal calcifications are noted. However, MRI is most helpful for evaluation of NCC. [17]

Brain biopsies are only rarely performed in NCC.[17] Excisional biopsy could be performed to rule out NCC in cases of subconjunctival cysts.[3]

Differential diagnosis of Orbital Cysticercosis includes orbital idiopathic myositis, lesions causing compressive optic neuropathy, such as tumors and metastases, muscle abscesses, and hematomas. Other parasitic infections should also be included in the differential, such as hydatid cysts.[3]

The differential diagnosis for NCC includes CNS lesions such as abscesses and tumors.[17]

Four weeks of oral albendazole (15 mg/kg) and oral steroids (1.5 mg/kg) in a tapered dose are the recommended treatment for both NCC and orbital cysticercosis.[16] Albendazole has been proven to be superior to praziquantel, especially for giant subarachnoid cysts.[21] If no scolex is visualized or if the ELISA is negative, steroids are the recommended oral treatment. In cases of recurrence, repeat oral albendazole and oral steroids are recommended.[3] Steroids are necessary concomitant therapy due to the inflammatory response that will ensue with anti-parasitic infection.[3]

Surgery is recommended in cysts involving the subconjuctiva or eyelid.[3]

The inflammatory response incited as a result of the parasite can lead to a number of complications. If the cyst is located in the posterior segment, complications such as retinal detachment, retinal hemorrhages, proliferative vitreoretinopathy, and secondary glaucoma can ensue.[3]

Prognosis is best for patients who seek treatment early and whose imaging studies normalize after initial infection. Adults and children who develop seizures from NCC often have seizure recurrence rates of 49% at 4 years and 68% after 6 years.[24]

Recommendations for travelers to endemic regions

The primary means of transmission of NCC/OOC to travelers to endemic regions is by ingesting the eggs of the cestode in contaminated water or food. Thus, avoiding uncooked pork is only one means of prevention of exposure. Even strict vegan or vegetarian travelers are at risk for exposure. It is important that only freshly boiled or bottled water is consumed to avoid ingestion of potential parasites and bacteria in endemic areas. The Centers for Disease Control and Prevention (CDC) recommends the following for travelers to endemic countries: wash hands with soap and water (and not just hand sanitizers) after using the toilet, changing diapers or handling food; washing in safe water and peeling all vegetables and fruits before consumption; eating fully cooked meals; using only bottled or boiled drinking water; and preferentially avoiding uncooked (e.g., salads) or undercooked foods.