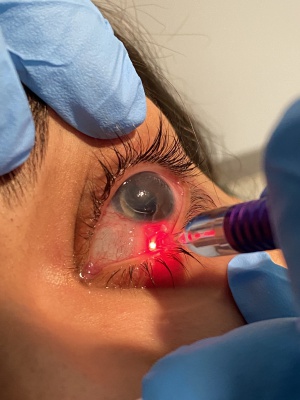 Management of pediatric glaucoma remains challenging due the complexity and rarity of the disease, differences in tissue behavior from adults, the potential for long term implications, and difficulties in post-operative course. [1][2][3] As opposed to adult glaucoma, childhood glaucoma is primarily a surgical disease. Preferred initial management is angle surgery such as goniotomy[4] or trabeculotomy ab externo.[5] Filtering surgery via trabeculectomy[6] or placement of glaucoma drainage devices[7][8][9] are used as secondary options after failure of angle surgery.

Cyclodestructive procedures, such as cyclocryotherapy[10] and cyclophotocoagulation (CPC)[11][12], are typically utilized in pediatric glaucoma refractory to all other medical and surgical treatments, eyes with limited visual potential, and eyes with elevated intraocular pressure (IOP).[13] Transscleral diode laser CPC has been the mainstay of ciliodestruction in pediatric glaucoma.[14][15] Endoscopic cyclophotocoagulation can also be used for a more targeted approach in pseudophakic and aphakic patients who cannot receive transscleral therapy.[16][17]

Transscleral CPC (TS-CPC) is performed with the Neodymium:yytrium-aluminum-garnet (Nd:YAG) laser in contact fashion at 1064 nm wavelength or with the semiconductor diode laser at 810 nm wavelength. Due to its greater absorption by melanin in the ciliary epithelium, the diode laser system is currently the standard modality for refractory glaucoma in children. [13][18][19] A semiconductor solid state diode laser system is used to deliver laser energy at 810 nm wavelength. Depending on the child’s age, sedative, retrobulbar, peribulbar, and topical anesthesia is advised. A lid speculum is placed for optimal viewing of the peri-limbal area. Transillumination may be used to locate the ciliary body in eyes with abnormal anatomy particularly if buphthalmic. A specialized handpiece delivers the laser energy posterior to the limbus in either a continuous (G-probe, Iridex, Mountain View, CA) or micropulse (MP3, Iridex, Mountain View, CA) fashion. For continuous wave CPC, initial power is set to 1000-2000 mW at a duration of 1000-4000 milliseconds. Power can be increased in 100-250 mW increments until an audible popping sound is heard and titrated down to the desirable power for the procedure. Other surgeons may prefer applying energy at a lower power over longer duration. The number of application spots is generally 6-8 spots per quadrant, with application to 3 quadrants and sparing of the 3:00 and 9:00 positions. In micropulse CPC, the power is set to 2000 mW and applied for up to 100 seconds or more of treatment time. The laser is applied in a typical “duty cycle” of 31.3%, which delivers the laser in repetitive pulses in a cycle of 500 milliseconds on and 1100 milliseconds off. The MP3 handpiece is held with steady pressure and is swept along the limbus in a painting fashion for the duration of the treatment in the desirable number of quadrants. The power, time, sweeping speed, and treatment of quadrants or hemispheres are all variables that can be modified. At present there are general guidelines for treatment parameters, however definitive dose energy response curves are yet to be determined. After the procedure, topical anti-inflammatory medications like steroid drops and cycloplegics are given. Alternatively, a steroid subconjunctival injection may be used. 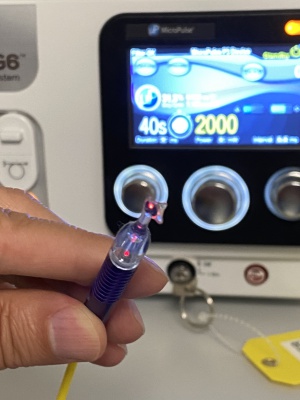 Continuous wave CPC is generally well tolerated and with fewer complications reported in children.[15] Kirwan et al.[14] demonstrated sustained control of IOP to <21 mmHg in 72% of eyes at 1 year and 51% at 2 years with multiple CPC treatments. Single CPC treatments achieved success, defined as IOP <22 mmHg or reduction by 30%, in 62% of children but this decreased to 37% at 1 year. This effect was demonstrated in younger and phakic patients. Autrata et al.[12], showed clinically effective reduction in IOP in 79% of eyes with repeat CPC at 1 year. Continuous wave CPC was also shown to have similar efficacy and complication rates to sequential tube shunt surgery following primary tube shunt failure in children.[20] The use of CPC as a primary treatment for childhood glaucoma has been suggested in situations of decreased access to treatment. A study comparing outcomes of trabeculectomy and CPC in Tanzania showed a lower rate of complications in children who received CPC as initial treatment.[21]

Complications of CPC in children are similar to those in adults. The most feared complications include hypotony, phthisis, sympathetic ophthalmia, retinal detachment, uveitis, cataracts, and decrease or loss of vision. The most commonly encountered complications include pain and post-operative inflammation.[1] The largest study on continuous wave CPC demonstrated inoperable retinal detachments in 3 of 77 eyes.[14] Autrata et al. reported post-operative uveitis in 9 of 69 eyes (13%).[12] Sympathetic ophthalmia is a very rare but dreaded complication of transscleral CPC, with an estimated overall incidence of 0.07%.[25] Very few cases of sympathetic ophthalmia have been reported in children.[25][26][27] Micropulse CPC is generally thought to be less inflammatory than continuous wave CPC, due to less thermal energy being absorbed by tissues in and surrounding the ciliary body. This was demonstrated in a study that reported 6 total cases of hypotony, phthisis, severe pain, and anterior uveitis in patients who received continuous wave CPC versus 1 case of hypotony in the micropulse CPC group in a study of 45 eyes.[18] Another report investigating outcomes of micropulse CPC reported no complications at all.[23]

Endoscopic CPC combines a laser system, video camera, and illumination probe to allow for direct visualization and targeted treatment of the ciliary body processes while potentially sparing surrounding tissues.[13] A triple function G-probe handpiece (Endo Optiks Inc, Little Silver, NJ) combines a semiconductor diode laser system at 810 nm wavelength, fiberoptic microendoscope, and a Xenon-arc light source. The endoscope has a 110-degree field of view and a depth of focus of 0-20mm. The diode laser has up to 1.2 watts of power output and is focused using a helium-neon aiming beam at 670 nm wavelength. After the child receives general anesthesia, the surgeon accesses the ciliary body through either a limbal or pars plana incision. In pseudophakic, and aphakic eyes, the ciliary body is typically accessed anteriorly through a corneal incision and with viscoelastics used to inflate the ciliary sulcus.[13] In phakic eyes endoscopic access is not possible anteriorly and is high risk for lens damage and cataract formation. As such, phakic eyes are not considered for this approach. Laser energy is delivered continuously in timed pulses ranging from 200-800 mW in power. Power is titrated down if tissue disruption or audible “pops” are visualized. Treatments are applied for 90-270 degrees of the ciliary body or to the extent that is visible through the endoscope being introduced through one or more corneal incisions for access.[17] Post-operatively, antibiotic and anti-inflammatory drops are given and patients are followed-up the next day.

Endoscopic CPC is generally used in adult eyes and less often in childhood eyes and usually after failure of other traditional surgeries and cyclodestructive procedures.[16] A retrospective review of 51 procedures in 29 children with mean follow-up time of 20 months demonstrated successful IOP reduction <21 mmHg in 43% of patients.[16] Another study examining outcomes in pseudophakic and aphakic patients demonstrated an overall success rate of 53%.[17] When utilized as primary surgical treatment for glaucoma, however, endoscopic CPC demonstrated a lower rate of IOP reduction <21 mmHg (46% vs. 55%) and higher treatment failure rate (54% vs. 45%) compared to transscleral CPC as primary treatment.[28] Endoscopic CPC may present a useful modality in reducing IOP when used after repeated failures of transscleral CPC.[29] This is postulated to be due to atypical anatomy in pediatric patients and the ability to directly visualize the ciliary processes and aim a precise beam of laser at the target tissue. The disadvantage is a more invasive procedure that requires incisional surgery and carries a higher risk of infection and other postoperative complications.

Complications of endoscopic CPC are similar to other forms of CPC and include hypotony, phtisis, retinal detachment, intraocular inflammation, and decrease in vision. In addition, infection is a risk due to its invasive nature and the need for an incision. In phakic patients there is also risk of damaging the crystalline lens during the surgical procedure which will lead to cataract formation and the need for additional surgery.[13] Aphakic patients have been found to be particular prone to retinal detachment in endoscopic procedures in multiple studies.[16][29]

Cyclophotocoagulation is generally considered a safe procedure in the treatment of refractory pediatric glaucoma.[1] Current literature has suggested that micropulse CPC may provide sustained IOP reduction with multiple treatments.[18][19][20][23] Micropulse CPC delivers less energy and may be a safer modality than continuous wave CPC due to its on and off cycles allowing for less thermal effects.[18][23] The micropulse CPC probe design has changed and manufacturer treatment parameters continue to evolve. As such, validation studies are needed to continue to monitor its safety and efficacy. Additionally, endoscopic cyclophotocoagulation may have some role, albeit limited, in the treatment of select cases with atypical eye anatomy and after failure of other cyclodestructive options.[13][16][17] Care must be taken when performing endoscopic laser due it’s documented risk of retinal detachment in aphakic patients and risk of damage to the lens in phakic patients.[13][16][17] It has recently been suggested that not enough is known about the risks and benefits of micropulse and endoscopic CPC in adults or children.[30] To date, no randomized, controlled clinical trials have been conducted on either micropulse or endoscopic CPC and current hypotheses on increased efficacy of these procedures versus standard continuous wave CPC are not based on rigorous experimental or clinical data.[30] Additional comparative protocol studies are needed to determine optimal and safe laser parameters for children.