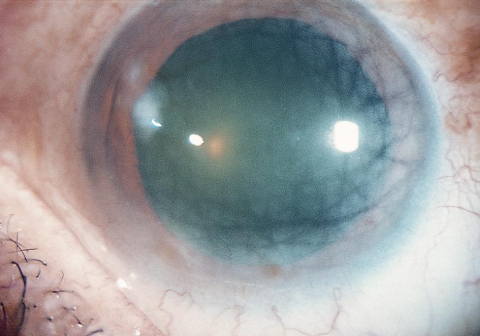 Originally described in 1927 by Weizenblatt and named by Vogt in 1930, crocodile shagreen is thought to be a benign, degenerative condition of the cornea which is usually asymptomatic.

It is most commonly associated with advanced age. It may be seen in association with band keratopathy or after traumatic corneal injury. Isolated cases have been reported in pseudoxanthoma elasticum, glaucoma, and polymorphic amyloid degeneration[2].

It is most likely a degenerative disorder with a non-familial pattern of occurrence (in contrast to Central Cloudy Dystrophy of Francois).

Central Cloudy Dystrophy of Francois, which has autosomal dominant transmission, has a similar clinical appearance; however, as the name implies, it only affects the central cornea. Similar anterior corneal findings have been described with fluorescein staining after pressure patching, ocular hypotony, flattening of keratoconic cornea by a hard contact lens, band keratopathy, and X-linked megalocornea.

This condition is not believed to cause reduced vision. No treatment is necessary.

The prognosis is usually very good as the condition is usually asymptomatic.