Cornea plana is a congenital condition where the cornea is flattened and the angle between it and the sclera is decreased[1]. This may lead to hyperopia, a hazy corneal limbus, and early development of arcus lipoides[2][3].

Cornea plana has both autosomal dominant and autosomal recessive inheritance[4].

Cornea plana is a rare condition. Families with CNA1 (dominant inheritance) have been studied in Denmark, Germany, USA, the Netherlands[3], and Cuba[6]. CNA2 (recessive inheritance) has been identified in Finnish and Saudi peoples.

The locus for CNA2 has been mapped in Finnish families. This locus is in a 3 cM interval with markers D12S82 and D12S327 on either side on chromosome 12. There is high prevalence in those in northern Finland and the lower parts of the Kemijoki river in Finland[3]. It affects males and females equally[4]. Finnish cases of cornea plana make up 80% of the CNA2 cases. Saudi Arabia is the second most common background of patients with this disease. The founder effect, which occurs when a small subset of a large population establishes a new colony resulting in a reduction in genetic variation in this new colony, has been cited as the reason why cornea plana is mostly found in these two groups of people[8].

A KERA gene mutation on chromosome 12 has been found to lead to autosomal recessive cornea plana. Multiple types of missense and nonsense mutations have been described, resulting in similar phenotypes. In the Saudi population, specifically seven different KERA mutations have been described[8]. Keratocan is encoded by the KERA gene. This is a proteoglycan that is exclusively present in the cornea and plays a role in fibrillogenesis[9], affecting fiber spacing and diameter. A mutation in this therefore affects corneal refraction and transparency[8].

Though mutations in KERA are associated with CNA2, this is not the case for CNA1[10]. Other genes that have been found to play a part in other corneal diseases (DCN, DSPG3, LUM, PITX2, and FOXC1) have been investigated and were not found to be a cause of CNA1[11]. Regardless, it is thought that there are two genes responsible which are also present on chromosome 12 and studies are ongoing to identify them[6].

In CNA1, histology is characterized by acanthosis, keratinization of the corneal epithelium, defects in Bowman’s membrane, and vascularization and scar formation in stroma[6].

The common manifestations of cornea plana include flat cornea, indistinct border of the sclera and cornea due to the decreased angle between the two, early-onset arcus lipoides, and low anterior chamber depth[3]. The corneal diameter is expected to be small, but it can be difficult to measure due to the scleral tissue overlapping a few millimeters over the cornea. The anterior chamber depth has been found to range between 0.8 and 2.1 mm in described patients[4].

Additionally, one can present with high hyperopia, strabismus, microcornea, posterior corneal stromal haze, posterior embryotoxon, iridocorneal adhesions, iris nodules, iris atrophy, and pupillary irregularities[11]. There are some cases where myopia has been reported rather than hyperopia[12]. Presentation is bilateral in up to 90% of cases and is associated with sclerocornea[1][12]. Lastly, congenital ptosis has been described as well with likely etiology being lack of corneal protrusion[4]. 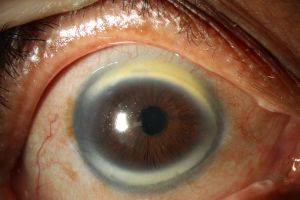 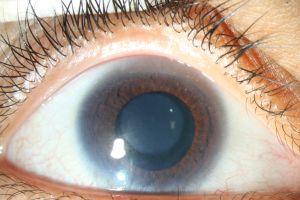 CNA1 presents with milder symptoms where visual acuity is normal and cornea parenchyma is clear[4]. Meanwhile, CNA2 typically presents with the more severe manifestations of the above common symptoms, specifically the iris malformations, slit-like cornea[3], and limbal area abnormalities[6]. (Figure1) In CNA2 it is also more common to see a round, opaque thickening in the central cornea[13][14](Figure 2) which typically measures 4-6 mm and is attached to Descemet’s membrane[4].(Figure 3) Around this area of the opacity, the cornea is its thinnest[4]. The hyperopia in CNA2 is typically extreme, being greater than +10 D (diopters)[13], while in CNA1 the average value has been found to be +6.33 D[11]. 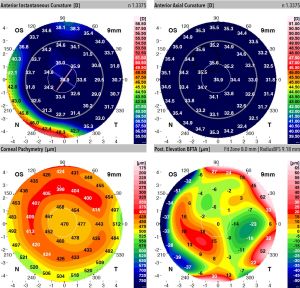 Diagnosis is made based on clinical presentation, keratometry[12], pachymetry, endothelial imaging[9].

Measurement of corneal refraction can be used to distinguish between CNA1 and CNA2 since, as discussed in the signs and symptoms section above, the decreased refraction is more severe in the autosomal recessive form compared to the autosomal dominant form[4].

It can be difficult to obtain accurate measurements of corneal keratometry due to the sometimes uneven surface of the cornea in these patients. In addition, some older keratometers are not able to measure refraction less than 30 D. Forsius et al.[4] recommends placing a weak plus lens in front of the keratometer to allow you to measure the flatter corneas that are present in this disease. Additionally, if the keratometry is measured from the corneal opacity, the value has been found to be lower, by between about 2-7 D[4].

When considering other differential diagnoses in a patient with a flattened cornea, chromosomal analysis of the long arm of chromosome 12 can be used to identify cornea plana[4].

1.      Peripheral sclerocornea[3]: There are congenital (autosomal dominant and recessive) and idiopathic etiologies which are typically bilateral. In this condition the cornea is opaque and flattened; however, this loss of corneal transparency is an isolated ocular manifestation in sclerocornea. The congenital presentation of this disease is associated with 22q11.2 deletion which is associated with systemic malformations[15]. Sclerocornea has been found in patients with cornea plana[12].

2.      Ehlers-Danlos disease type VI[4]: This disease can present with ocular abnormalities such as blue sclera, corneal thinning, microcornea, cornea plana, and sclerocornea[16]. However, this disease presents as a syndrome with hypermobile joints, hypotonia, skin hyperelasticity and kyphoscoliosis[17].

3.      Posterior polymorphous corneal dystrophy[18]: In this autosomal dominant disease, patients present with corneal opacities that can result in edema. It affects the endothelium and Descemet’s membrane. Patients can present with decreased visual acuity and can be associated with abdominal hernias and Alport Syndrome[18].

An isolated corneal flattening more likely indicates cornea plana, but if it is present along with other systemic malformations of the body this may indicate another diagnosis[6].

It is difficult for patients to use contact lenses since they can result in irritation and movement on the eye due to the abnormal shape of the cornea. When prescribing glasses for a patient, Forsius et. al[4] recommends basing these off subjective refraction and giving lenses that are 3-4 D weaker than objective values. This article also cited two cases where a corneal graft was performed in CNA2, both of which were unsuccessful. In one, new vessels filled the graft and in the other poor vision resulted[4].

Cornea plana can be associated with hyperopia and astigmatism and if this isn’t managed with prescription glasses in childhood, it can lead to ametropic amblyopia[12]. Additionally, the risk of closed-angle glaucoma is greater in these patients due to the low depth of the anterior chamber[4] and open-angle glaucoma has also been reported[1].

Cataract surgery can be difficult in these patients due to shallow anterior chamber depth and reduced axial length. A case of cornea plana was described where the patient was treated with phacoemulsification and an in-the-bag implantation of the intraocular lens. The paper noted that intraocular lens power calculations were difficult to conduct due to the inability to measure posterior corneal curvature; however, they were able to successfully perform cataract surgery in the patient[12].