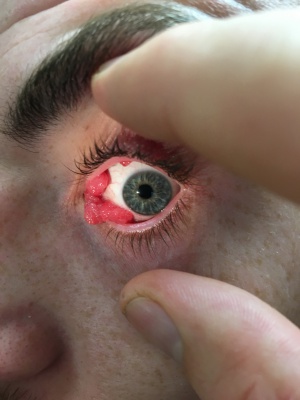 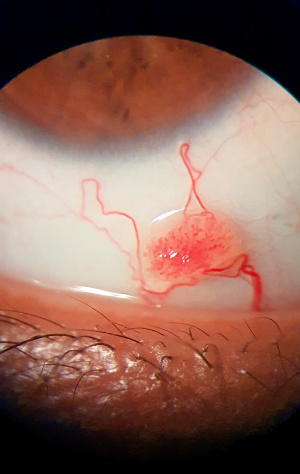 In general, papilloma is a histopathological term describing tumors with specific morphology. They take on a classic finger like or cauliflower like appearance. Papillomatous lesions often are lobulated with a central vascular core.

Irrelevant of its cytology, a neoplasm of epithelial origin with this form of growth is also called papilloma. Papillomas can be benign or malignant and can be found in numerous anatomical locations (eg, skin, conjunctiva, cervix, breast duct). Specifically, conjunctival papillomas are benign squamous epithelial tumors with minimal propensity toward malignancy.

Although no cross-section epidemiological studies are available, evidence suggests that people without overt clinical presentation may harbor the virus, and HPV DNA can be identified in asymptomatic conjunctiva. HPV types 6 and 11 are the most frequently found in conjunctival papilloma. HPV type 33 is another source in the pathogenesis of conjunctival papilloma. HPV types 16 and 18 commonly are associated with not only high-grade cervical intraepithelial neoplasia and invasive carcinoma but also squamous cell dysplasia and carcinoma of the conjunctiva. The recurrence rate for infectious papillomas is high. Limbal papillomas have a recurrent rate of 40%.

Egbert et al reported a case of conjunctival papilloma in an infant born to a mother with HPV infection of the vulva during pregnancy.[1] Those infected at birth may later develop respiratory papillomatosis, which may be life threatening. Direct contact with contaminated hands or objects may result in ocular manifestations.

Squamous cell papilloma, which has an infectious viral etiology, has the propensity to recur after medical and surgical treatment. New and multiple lesions may arise after excision. Recurrent conjunctival papillomas may extend into the nasolacrimal duct causing obstruction. Lauer et al and Migliori and Putterman reported a case of nasolacrimal duct obstruction after extension of the papillomas into the lacrimal sac.[2] [3] Most papillomas are benign. Rarely, they can undergo malignant transformation, signs of which include inflammation, keratinization, and symblepharon formation.

Squamous cell papillomas (eg, infectious papilloma, viral conjunctival papilloma) are composed of multiple branching fronds emanating from a narrow pedunculated base. Individual fronds are surrounded by connective tissue, each having a central vascularized core. Acute and chronic inflammatory cells are found within these fronds. The epithelium is acanthotic, nonkeratinized stratified squamous epithelium without atypia. Numerous goblet cells are seen along with acute inflammatory cells. Koilocytosis is exhibited. The basement membrane is intact.

Limbal papillomas are sessile lesions arising from a broad base with a gelatinous appearance. Corkscrew vascular loops and feeder vessels are seen. The epithelium is acanthotic, displaying varying degrees of pleomorphism and dysplasia. The epithelium surface may be keratinized with foci of parakeratosis within the papillary folds. The basement membrane is intact.

Inverted papillomas exhibit exophytic and endophytic growth patterns. Invagination into the underlying stroma instead of the exophytic growth pattern is exhibited by squamous cell or limbal papillomas, whereas some lesions exhibit a mixture of exophytic and endophytic growth patterns. Unlike inverted papilloma arising in the lateral nasal wall or paranasal sinuses, lesions arising from the conjunctiva tend to be less aggressive in malignant transformation. The lesions are composed of lobules of epithelial cells extending down into the stroma. The lesion may be elevated or umbilicated. Epithelial cells do not demonstrate atypia, and dysplastic changes are uncommon for conjunctival inverted papillomas. The cytoplasm is vacuolated in some cells. They may resemble squamous papilloma or pyogenic granuloma. Numerous goblet cells are intermixed with the epithelium. Cystic lesions may be seen secondary to the confluence of goblet cells. The lesion may contain melanin granules and/or melanocytes.

Human papillomavirus (HPV) and polyomavirus are members of the Papovavirus family. These viruses are small (55 nm), naked, and icosahedral with circular double-stranded DNA. Papilloma viruses exhibit site and cell-type specificity, as follows:

Transmission is via direct human contact. Proliferation of dermal connective tissue is followed by acanthosis and hyperkeratosis. HPV is tumorigenic, and it commonly produces benign tumors with low potential for malignancy. In general, prolonged proliferation may lead to cellular atypia and dysplasia. HPV type 11 was the most common and frequently found in conjunctival papilloma as analyzed by polymerase chain reaction (PCR).[6]

Key features to assist an ophthalmologist in examining a surface tumor include the following:

Tumor location: Knowing the probability of finding a tumor in a specific anatomical location greatly assists the ophthalmologist not only in making the diagnosis but also, and more importantly, in prioritizing the differential diagnosis.

Tumor topography: In evaluating, attention should be made to the tumor's surface, to include the tumor's texture and edge.

Tumor growth pattern: The pattern of growth may be described as solitary, diffuse, or multifocal.

Clinical signs associated with limbal papilloma are as follows:

Clinical signs associated with inverted conjunctival papilloma are as follows:

Observation and patient reassurance are indicated for squamous cell papillomas. These lesions may regress spontaneously over time. Seeding may follow excision, resulting in multiple new lesions. For limbal papillomas, excision is indicated to rule out neoplastic changes.

Cryotherapy is indicated for squamous cell papillomas. Less scarring occurs, and the recurrence rate is low. It is not indicated for limbal papillomas because this procedure does not distinguish between benign papillomas and malignant papillomas. The double-freeze-thaw method is preferred and appears to be the most effective technique.

Dinitrochlorobenzene (DNCB): Petrelli et al demonstrated success with DNCB in the treatment of recurrent conjunctival papillomas.[7] This treatment modality is reserved for cases when surgical excision, cryoablation, and other treatment modalities have failed. The patient is sensitized to DNCB. Once sensitized, DNCB is applied directly to the papilloma. The mechanism for this treatment appears to be the delayed hypersensitivity reaction causing the tumor to regress; however, the exact mechanism is unknown.

Interferon is an adjunct therapy to surgical excision of recurrent and multiple lesions. Alpha interferon is given intramuscularly (daily for 1 mo, 2-3 times/wk for the next 6 mo, then tapered off). Lass et al indicated both nonrecurrence and recurrence of conjunctival lesions.[8] However, those recurring lesions tend to be less severe in clinical presentation. Because of its antiviral and antiproliferative properties, this form of therapy is designed to suppress tumor cells; it is not curative. Additionally, topical interferon alpha-2b has been shown to be an effective adjunct therapy for small-to-medium size lesions but not for large lesions without surgical debulking. Topical interferon alpha-2b can be utilized as an adjunctive therapy for recurring conjunctival papilloma.[9] [10] More recently, topical alpha-2b interferons have shown to be successful in treating not only primary conjunctival papilloma but also conjunctival intraepithelial neoplasia.[11]

Mitomycin-C is an adjunct therapy to surgical excision. Mitomycin-C is indicated for recalcitrant conjunctival papillomas or those refractive to past multiple treatments. Hawkins et al reported complete regression of conjunctival papilloma 9 months after surgical excision followed by intraoperative mitomycin-C application.[12] Mitomycin-C (0.3 mg/mL) is applied via a cellulose sponge to the involved area(s) after surgical excision. The sponge is held in place for 3 minutes. The treated area is irrigated copiously with normal saline after mitomycin-C application. Complications include symblepharon, corneal edema, corneal perforation, iritis, cataract, and glaucoma.

Oral cimetidine (Tagamet): Although commonly used to treat peptic ulcer disease, cimetidine has shown to be effective in the treatment of recalcitrant conjunctival papilloma. Shields et al demonstrated dramatic tumor regression with nearly complete resolution in an 11-year-old boy treated with cimetidine.[13] Chang et al indicated that oral cimetidine can be used as an initial treatment modality in cases where the lesion is quite large and recalcitrant.[14] Apart from its antagonistic effect on H2 receptors, cimetidine has been found to enhance the immune system by inhibiting suppressor T-cell function and augmenting delayed-type hypersensitivity responses.

Carbon dioxide (CO2) laser: Schachat et al and Jackson et al reported this treatment modality to be safe and most effective.[15] [16] It is indicated for recalcitrant conjunctival papillomas. The procedure is performed easily. This procedure allows for precise tissue excision with minimal blood loss and trauma to tissue. Rapid healing of tissues occurs without significant scarring, edema, or symblepharon formation. Recurrence is low, resulting from the destruction of viral particles and papillomatous epithelial cells. Gentamicin ointment twice a day for 7-10 days is prescribed postoperatively to allow proper healing and reepithelialization.

Excision is indicated for squamous cell and limbal papillomas.

The goals of pharmacotherapy are to reduce morbidity and to prevent complications.

Biopsy (incisional or excisional) is a reasonable and safe method that aids in obtaining a definitive diagnosis.

Indications for a biopsy are as follows:

For patients who undergo cryoablation, CO2 laser, or surgical excision for conjunctival papilloma, posttreatment follow-up care is usually at 5 days, at 1 month, and then at 1 year.

The prognosis for patients with this condition is generally good.