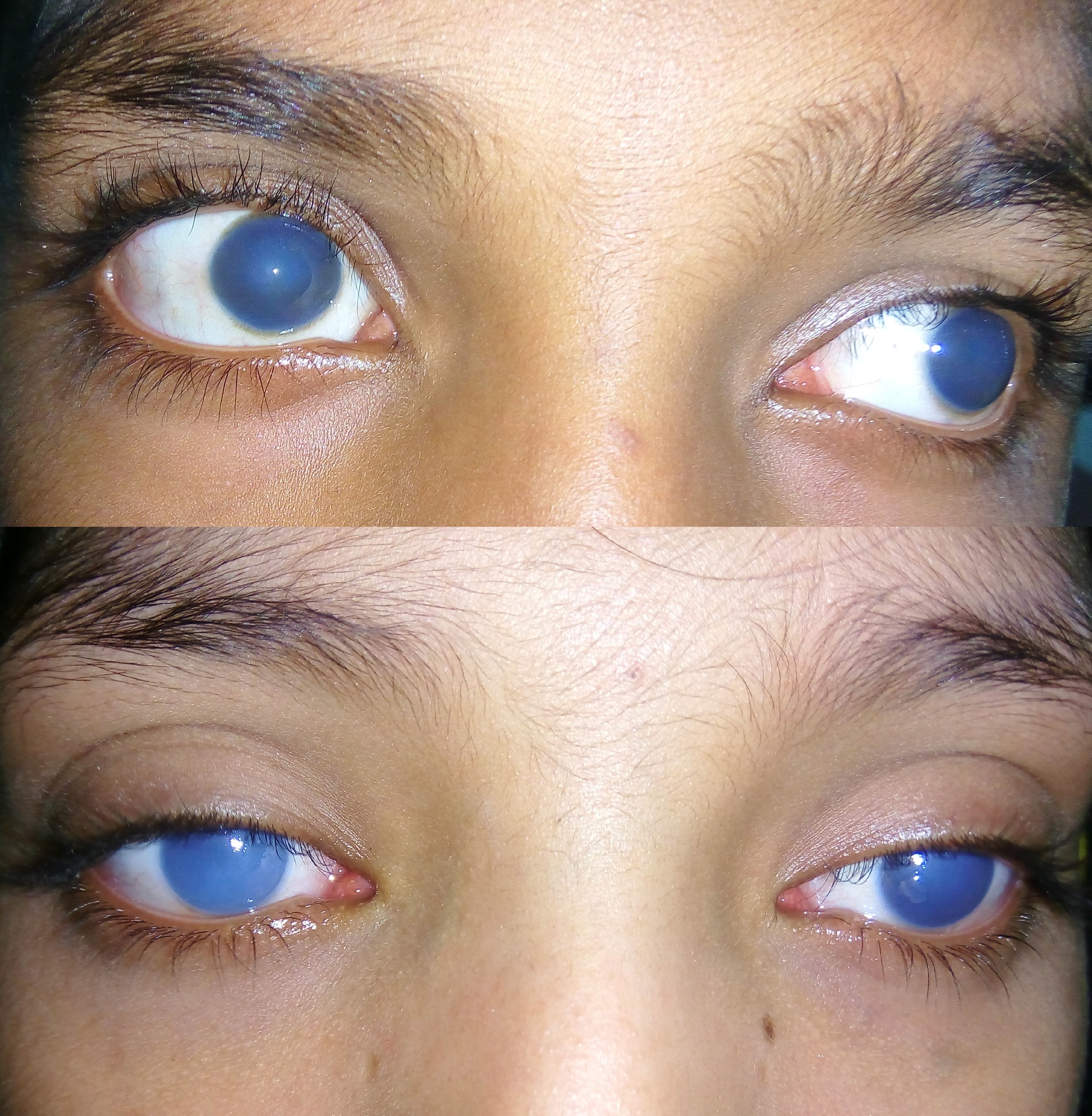 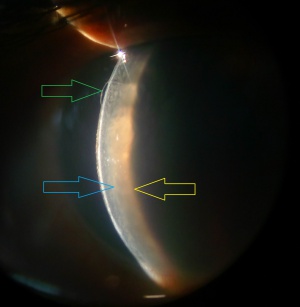 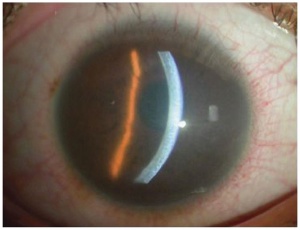 Congenital Hereditary Endothelial Dystrophy (CHED), one of the Congenital Corneal Opacities (CCO), is a bilateral corneal condition characterized by cloudy cornea that may be present from birth or may be infantile in onset.[1] As a consequence of the endothelial dystrophy, the cornea becomes edematous, which leads to a degradation in the patient’s vision.

CHED has been traditionally classified as either an Autosomal Dominant (CHED 1) or an Autosomal Recessive (CHED 2) variant. However, thanks to advances in corneal imaging and genetic analysis, this classification has recently been revisited and modified.[2]

A review of medical literature rendered a total of 5 families that presented with an autosomal dominant inheritance of CHED. After careful scrutiny, Aldave et al discovered that only 1 out of the 5 families, described by Pearce et al presented enough evidence of following an autosomal dominant pattern of inheritance that concurs with CHED 1. Ultimately, the clinical, histopathological and electron microscopic findings collected from this family were more consistent with the diagnosis of Posterior Polymorphous Corneal Dystrophy (PPCD) than CHED. [3]

In light of this, the International Classification of Corneal Dystrophies (IC3D) has eliminated CHED 1, as it is believed to be part of the PPCD spectrum. CHED 2 is from now on called simply CHED.[2]

CHED may also be seen as part of Harboyan syndrome, a sensorineural deafness accompanied by corneal opacification that is associated with the SLC4A11 mutation characteristic of CHED. [4] SLC4A11 is not only expressed in the corneal endothelial cells but also in fibrocytes and stria vascularis of the inner ear, these cell families have a common origin in the neural crest.[5]

Congenital Corneal Opacities (CCO) are fairly uncommon, with a prevalence of 6/100,000 newborns and 3/100,000 when Congenital Glaucoma patients are excluded.[6]

The exact prevalence, sex distribution and incidence of CHED are unknown at the moment.[7] Most cases have been identified in children of consanguineous parents from Saudi Arabia, India, Pakistan, Myanmar (Burma) and Ireland.[8]

The mutation causing CHED has been located in chromosome 20p13.[3] The affected gene is SLC4A11, which codes for a transmembrane protein from the bicarbonate transporters family. This protein works as a “pump” and is located in the stromal side of the endothelial cells. [9]

It has been observed that the protein affected by the SLC4A11 mutation fail to glycosylate and ultimately never reaches the cell surface.[5]

The function of this protein has not been completely determined yet; there are many theories as to what is the actual role of this protein, meaning, which ions it transports between the corneal stroma and the intracellular space of endothelial cells.[9] Amongst the theories of the role of the channel protein encoded by SLC4A11 is its regulation of the transport of boron. Boron transport is especially important during fetal life since it’s directly related to the differentiation of neural crest cells, the precursors of the corneal endothelium. Dysfunction of the boron transport protein may also lead to corneal edema from a dysfunctional osmotic gradient, ultimately clouding the cornea and hampering the patient’s vision.Dysfunction of the corneal endothelium is a hallmark of CHED.[3] Another proposed purpose of the protein encoded by SLC4A11 is the transport of the following substances: H2O, H+/OH-, NH4+ or Na+. Though promising, it hasn’t been determined which of these substances, if not all of them are transported by the SLC4A11 coded protein mainly because its in vivo action hasn’t yet been determined.[9] And yet another potential role for this protein involves control of reactive oxidative species and apoptosis.[10] 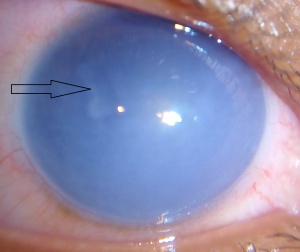 Bullous keratopathy (Arrow) and clouding of cornea of a CHED patient

CHED is characterized by bilateral corneal clouding at birth or perinatally. Symptoms consist of reduced vision, often leading to amblyopia. Nystagmus is another finding, presumably arising from corneal opacification induced occlusive amblyopia at an early age.[11] [12][13] 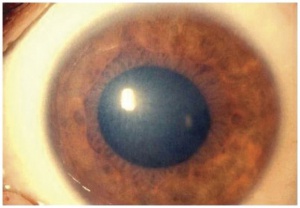 The above image represents a very mild case of CHED. One can appreciate the subtle ground glass corneal opacity around the light reflex seen here (photograph courtesy of ©American Academy of ophthalmology)

Children undergo a thorough slit lamp examination (either under anesthesia or in the office). Intraocular pressure (IOP) is also assessed (normal in most cases though may be falsely elevated due to increased corneal thickness).[7]

On slit-lamp evaluation, CHED is characterized by diffuse corneal edema and thickening of Descemet’s membrane affecting both eyes, usually symmetrically, presenting at birth. The corneal edema can vary from a blue-gray ground-glass appearance to total corneal opacification.[14]

The above photographs represent a more advanced case of CHED. One can appreciate the symmetric and diffuse bilateral corneal clouding (A). The pathology specimen (B) demonstrates diffuse edema with bullous keratopathy (arrow) and a thickened descemet’s membrane with an absence of endothelial cells. Images courtesy of the ©2016 American Academy of Ophthalmology http://www.aao.org/image/congenital-hereditary-endothelial-dystrophy

SLC4A11 gene analysis can be performed along with examination of relatives especially in the absence of a clear history. PCR amplification of the SLC4A11 and its adjacent intronic sequences help determine the presence of the mutation.[4][5]

Microsatellite markers of the 20p13 region have also being used to assess SLC4A11 mutations in consanguineous families.[4]

If corneal edema is mild and stable, hypertonic drops (hypertonic sodium chloride) and desiccating measures may be taken.[15][7]Recent experimental studies have shown potential for NSAID treatment as an option to restore the function cells affected by SLC4A11 mutation. [16]An ongoing clinical trial is slated to evaluate the effectiveness of this treatment in patients.[17]

Treatment for CHED is mainly surgical. The procedures that are commonly implemented are: Penetrating Keratoplasty (PK), a full thickness corneal transplantation; Descement’s Stripping Automated Endothelial Keratoplasy (DSAEK), where only the endothelium and a thin graft of posterior stroma are transplanted and Descemet’s Membrane Endothelial Keratoplasty (DMEK), where the graft consists of cornea endothelium only.

For many years, the gold-standard for CHED treatment was PK, but recently, DSAEK and DMEK have been implemented with promising results. Since CHED mainly compromises the corneal endothelium, it’s reasonable to consider DSAEK and DMEK as alternatives to PK because it tackles the pathological site directly.[1]

PK in children is technically challenging, mainly because of the uncertain refractive results.[1] Other challenges are that children may not be able to verbalize the subjective symptoms, may have a difficult time complying with post op medications/instructions, and also the higher propensity of this age group to develop graft rejection. Even though graft clarity is maintained, the visual outcomes may not be as encouraging as expected because of possible amblyopia.[18]

In a case series study of 134 children treated with PK by Al-Ghamdi and colleagues it was found that patients with CHED had a significantly higher rate of graft survival (85.7%) than in other conditions treated with PK such as non-CHED opacities (e.g. Peters anomaly), traumatic or acquired opacities.[18] In a multicenter retrospective study, Schaumberg et. al. determined a first graft survival rate of 71%.[19]

In terms of visual outcome, Al-Ghamdi and colleagues determined that CHED patients were more likely to achieve ambulatory vision (94.2%) than non-CHED (12.6%), acquired or traumatic corneal opacities (35.3%).[18] 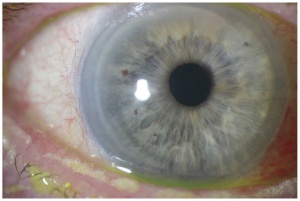 As time goes by, DSAEK is becoming a more preferable procedure to treat CHED mainly because the condition affects the corneal endothelium and this procedure consists of stripping the host’s endothelium and replacing it for the donor’s. [20] [21]

Graft clarity is not always attained with DSAEK, especially when compared to PK. Although graft clearing has been reported as early as 1 week post operatively in DSAEK, patients may experience residual haze possibly due to differences in ultrastructure.[1][21]

Anwar and El-Danasoury report that pediatric DSAEK’s refractive outcomes are generally encouraging, with patients been able to stabilize their vision more rapidly, having a much more regular ocular surface and when induced, an astigmatism of less than 3 dioters.[21] One major advantage of DSAEK to PK is that far fewer corneal sutures are used in DSAEK, causing less corneal astigmatism.

Ashar et-al report a tendency towards improvement in DSAEK patients, with final visual acuities ranging from 20/160 to 20/50 from an initial visual acuity of counting fingers to 20/125.[22] In a large case series of CHED patients treated with DSAEK, 8 out of the 9 children (88%) studied achieved a visual acuity of 20/40 or better.[21][23]

Finally, Ashar et-al compare PK and DSAEK and conclude that DSAEK is a very feasible alternative for the treatment of CHED. One of the reasons for this is that pediatric patients are prone to trauma, a common cause of graft dehiscence in PK patients. Trauma is far less likely to cause lenticular dislocation in DSAEK patients. Also it is a lower risk closed-sky procedure, there’s much less with less chance of allograft rejection. The long term corticosteroids requirement following DSAEK is also often less compared to PK given that a much thinner amount of tissue is transplanted, and thus potentially less steroid induced complications (cataracts and glaucoma).[1][20][21]

DMEK is thought to have advantages over DSAEK. The surgical wound is smaller, there may be better functional results, and potentially lower risk of graft rejection. [24]DMEK is a promising surgical option for children with CHED, however, it is technically more challenging and early outcomes in children have mixed results.[25][26]

Many technical difficulties arise when surgery is performed in CHED patients. DSAEK/DSEK/DMEK is particularly challenging because of the common lack of visibility in these patients due to corneal clouding. Based on this, some surgeons have opted for not stripping the Descement’s membrane and endothelium before placing the lamellar Descemet-endothelial graft. Busin and colleagues decided not to strip Descemet’s membrane in patients younger than 1 year of age because it could not be identified. The implanted tissue attached by 1 week post-surgery, although 4 of the 6 patients required rebubbling.[11]

Crystalline lens trauma with childhood cataract formation is another possible complication of lamellar corneal graft procedures like DSAEK. To prevent this, some authors have suggested the use topical pilocarpine to induce miosis and thus protect the lens from iatrogenic cataract.[27] Surgical manipulation and instrumentation should also be directed away from the crystalline lens.

When assessing post-surgical vision, amblyopia should be considered and managed. Significant corneal astigmatism may be the result of corneal sutures and should be managed, especially following PK. On the other hand, surgeons and family members should also consider amblyopia when determining timing of surgical intervention. Significant corneal clouding from CHED can lead to an occlusive amblyopia. [22]

Because of CHED’s relation to Harboyan syndrome, patients with a diagnosis of CHED should also be assessed for auditory loss. In fact, Siddiqui et-al suggests that there may be an unavoidable loss of hearing capacity of some degree in patients based on their findings in 4 families. Hearing loss could present as early as 2 years of age and as late as 33 years of age.[5]

Genetic counseling should be offered as well for families with history of CHED; there’s a 25% risk in siblings of both CHED and Harboyan syndrome.[15]

When compared to other congenital corneal clouding conditions, CHED patients present a better overall surgical outcome in terms of vision and corneal graft acceptance. However, visual potential is guarded. Close follow up and judicious medical and surgical planning are critical in optimizing visual outcomes in these young patients.