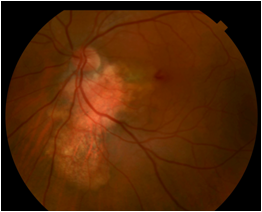 The etiology of the tumor is unknown. Factors implicated in its development, however, include inflammation, trauma, hormonal state, calcium metabolism, environment, and heredity. None of these factors appear to be either a sole, or an established, factor in causing patients to develop the condition. For instance, the hormonal hypothesis does not explain why males are affected by the condition or why these lesions can be observed in pre-pubertal patients. It has been postulated that choroidal osteoma is a choristoma (i.e., normal tissue arising at an abnormal location), but this explanation begs the question of why females are affected more frequently than males and why there is continuous development and growth of the lesion in adulthood. No consistency has been established with serum calcium, phosphate, or alkaline phosphatase levels[3].

Choroidal osteoma is more commonly unilateral, but bilateral disease has been observed and the second eye can be affected later than the first one. The condition affects females more than males and typically first manifests in the teenage years or in the early twenties. No risk factors have been identified.

Choroidal osteoma was first described at the 1975 Meeting of Verhoeff Society. The case was that of a healthy 26 year old female patient who presented with paracentral scotoma and visual acuity of 20/20 in the both eyes. On exam she had a well-defined, slightly elevated, yellowish-white, subretinal tumor surrounding the nasal half of the optic disc in the left eye. A radioactive phosphorus (32P) test demonstrated a 270% uptake overlying the tumor and the eye was enucleated. Pathology revealed mature bone in choroid, marrow spaces filled with loose connective tissue and some dilated, thin-walled blood vessels. These marrow blood vessels communicated on the surface of the tumor, with a rich capillary network lying beneath Bruch's membrane and a degenerated retinal pigment epithelium (RPE)[4][5].

Choroidal osteoma is a benign ossifying tumor with mature bone replacing choroid. It is commonly juxtapapillary or peripapillary, but may extend to the macula. It is rare that it would be found only in the macula. It is yellow-white to orange-red in color with clumping of brown, orange, or gray pigment. The shape is commonly oval or round with well defined scalloped or geographic margins. Occasionally decalcification can occur and is characterized by thin, atrophic, yellow-gray regions with associated RPE atrophy[6][7]. Decalcification can occur spontaneously or as a result of laser photocoagulation or photodynamic therapy (PDT). Choroidal neovascular membranes (CNVM) can also develop.

The patients report gradual onset of visual blurring, metamorphopsia, and visual field defects corresponding to the location of the tumor. They can be asymptomatic as well. The patients are most commonly females and in their late teens to early twenties.

On fundus exam, choroidal osteoma appears as a juxtapapillary or peripapillary lesion that is yellow-white to orange-red in color with clumping of brown, orange, or gray pigment. It is oval or round with well defined scalloped or geographic margins. Thin, atrophic, yellow-gray regions with associated RPE atrophy represent areas of decalcification. Choroidal neovascularization can also be observed. CNVM appears as elevated gray-green areas associated with subretinal fluid and subretinal hemorrhage.

The description of choroidal osteoma given by J.D. Gass in 1978 still holds: 1) slightly and irregular elevated, yellow-white, juxtapapillary, choroidal tumor and well-defined geographic borders; 2) diffuse and mottled depigmentation of the overlying pigment epithelium; and 3) multiple small vascular networks on the tumor surface[4].

The diagnosis is mainly clinical and relies on the appearance of the lesion on the examination of the posterior pole. A clinician should pay attention to areas of decalcification and be aware of the possibility of CNVM. Additional diagnostic studies are required to support the diagnosis.

On ultrasound, the A scan shows a high intensity echo spike. The B scan shows slightly elevated, highly reflective choroidal mass with acoustic shadowing that gives an appearance of “pseudo-optic nerve”. The mass persists at lower scanning sensitivity after the other soft tissue echoes have disappeared[3]. 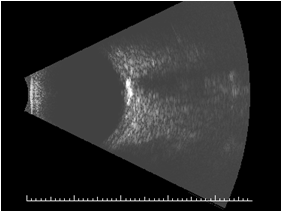 Fluorescein angiography shows early patchy hyperfluorescence with late diffuse staining. If CNVM is present, leakage is seen.
Optical coherence tomography can also be utilized in the cases of CNVM.
Choroidal osteoma can be seen on X-ray or CT scan – currently these modalities are rarely used for this condition[4][3] Choroidal osteoma appear hypointense in bothT1 and T2 weighted MRI images.
Pathology shows dense bony trabeculae with intertrabecular marrow and narrowed choriocapillaris. RPE is focally depigmented with clumps of pigment granules along Bruch’s membrane[3].

No laboratory tests are currently recommended. No consistency has been observed with serum calcium, phosphate, or alkaline phosphatase levels.

Asymptomatic or stable choroidal osteoma can be observed.
For CNVM, surgical removal[8] and PDT[9][10][11] have been used in the past, as well as laser treatment[12][13][14][15].More recently, anti-VEGF treatments such an intravitreal ranibizumab and bevacizumab have been employed with success[16][17][18][19][20][21].
It has been shown that the margins of the choroidal osteoma that are decalcified have no tumor growth and display the stabilization of the tumor scar. Therefore, it has been proposed for the calcified extrafoveal osteoma, to use PDT at the edges to decalcify the tumor and prevent its growth and foveal involvement[22].

Intravitreal therapy with anti-VEGF medications has been employed for CNVM.

Complications of choroidal osteoma include decalcification and CNVM. 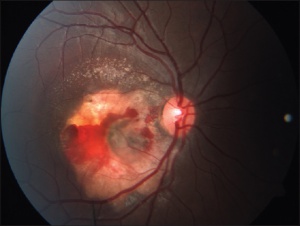 At 10 years, 56% to 58% of patients have visual acuity less than or equal to 20/200. Long term poor visual acuity in patients with choroidal osteoma is associated with subretinal fluid, RPE alterations, and subretinal hemorrhage from choroidal neovascularization. Decalcification has also emerged recently as a new factor predictive of poor visual acuity[1].
Tumors show growth in 41% to 51% of patients at 10 years. Mean growth is approximated to be at the rate of 0.37 mm/yr. The factor found to be predictive of the tumor growth is absent overlying RPE alterations. Additionally, no tumor showed growth in the region of decalcification[1][23].
CNVM occurs in 31% to 47% of patients at 10 years. Factors predictive of CNVM are irregular tumor surface and subretinal hemorrhage[1][23].
Decalcification occurs in 46% of patients at 10 years. It is associated with irregular tumor surface. When decalcification occurs in the area of the macula, it is associated with poor visual acuity that is possibly due to photoreceptor atrophy[24]. However, a decalcified border of a tumor shows no growth on the margin with decalcification and results in the stabilization of the tumor scar[1].