Chorioretinitis Sclopetaria is a closed globe ocular injury causing rupture of the choroid and retina from the forces of a high velocity object (projectile) passing very close to the globe. The location of rupture affects visual recovery and final best-corrected visual acuity (BCVA).[1]

Chorioretinitis Sclopetaria is a full-thickness rupture of the retina and choroid due to a blunt or nearby trauma from a high velocity object. Deformation from the sudden strike causes the chorioretinal layers to “split and retract” leaving the intact sclera bare.[2]

The pathology of Chorioretinitis Sclopetaria is the rupture of neurosensory retina and underlying choroid from the sclera due to the forces and shock waves from a penetrating high-velocity object in the orbit.

Chorioretinitis Sclopetaria is the tearing of the choroid and neurosensory retina due to a high-velocity projectile object passing adjacent to the globe. There is no open globe injury and intraocular pressure is maintained. The indirect and direct shock-wave forces cause chorioretinal rupture, vitreous hemorrhage, and later, white fibroglial proliferation.[1] In 1974, Dubovy et al. first reported histopathology of chorioretinitis sclopetaria in a postmortem exam of a gentleman that was shot in the eye.[3] Sclopetaria pathology was described as macular defects of Bruch’s membrane and choroid with extensive photoreceptor loss and hyperplasia of the retinal pigment epithelium. Loose fibrous tissue replaced the rupture choroid and retina, later being replaced with dense connective tissue resulting in scarring.[2]

Blunt ocular trauma to a closed globe can manifest into various injuries to the posterior segment. Chorioretinitis Sclopetaria is a coup injury which means it is damage at the site of impact. The projectile injury results in an absent retina and choroid in the same quadrant as the injury. Conversely, contrecoup injury is damage to tissue at the opposite site of impact which can result in commotio retinae, choroidal rupture, etc.[4][5]

The clinical and pathological findings are a result of differences in elasticity in the various parts of the eye. Bruch’s membrane is inelastic and ruptures easily with compressive forces. The choriocapillaris is attached to this membrane which further leads to acute subretinal hemorrhage. Retinal Pigment Epithelium is also inelastic, making rupture also more likely. Retina and Sclera are elastic thus very high impact energy, usually through high velocity projectile objects like a bullet, is necessary to cause disruption and damage. The result is a full-thickness defect involving the choroid, Bruch’s membrane, retina, with an intact sclera. As the etiology of sclopetaria is due to a high velocity object passing near the globe, it can create significant shock waves with enough force to retract the choroid and retina with bare sclera at the site of injury.[6] In the weeks following the injury, a dense fibrous tissue forms between the choroid and retina with scar formation with claw-like irregular borders.

Primary prevention starts with avoiding ocular injury from high velocity objects such as BB pellets, bullets, etc. Protective eye-wear can be preventative to an extent, however using safety precautions, proper equipment, and sufficient knowledge when utilizing BB guns etc. would prevent the injuries most significantly.

Chorioretinitis Sclopetaria was first described in 1872 by Herman Cohn, a German Ophthalmologist, as “fusion” of the retina and choroid in the posterior pole which he termed chorioretinitis. In 1901, Goldzieher described the fundus after a periorbital bullet wound as “chorioretinitis plastica sclopetaria.” He described the pathophysiology as the force of the bullet cause rupture of the choroid leading to hemorrhage, and ultimately the formation of reactive fibroglial proliferation at the site of rupture. The term sclopetaria may have originated from the Latin term sclopetum meaning handgun, or from the term sclow, meaning to claw or tear.[1][5][8]

The physical exam findings on the dilated fundus exam can reveal subretinal hemorrhages, vitreous hemorrhage, bare sclera, macular edema, choroidal breaks, and disc edema [6l].[7] Follow-ups after initial assessment can show fibrous tissue which develops after blood at the site of injury is reabsorbed.[4] It was previously assumed that the secondary fibrosis and scar formation between the choroid and RPE post-rupture would prevent retinal detachment. However, recent studies in 2014 by Papakostas et al. noted retinal detachment in three cases of sclopetaria with extensive orbital injury and intra-orbital surgery. Therefore, DFE in the weeks following injury should be monitored for development of a retinal tear or detachment.[9] 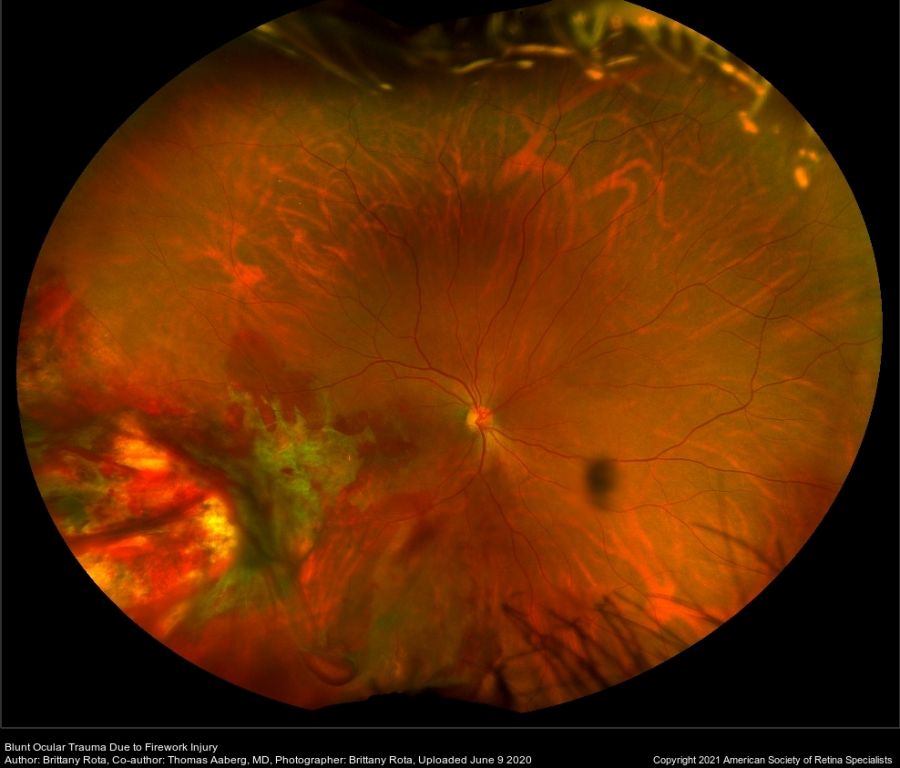 Retinal Examination by DFE can show white areas of bare sclera with adjacent rupture of the retina and choroid. There may be vitreous hemorrhage, sub-retinal or intra-retinal hemorrhage, and optic disc edema.

Injuries that result in chorioretinitis sclopetaria are caused by various mechanisms, hence the heterogeneity in imaging findings.

Computed Tomography scan: visualizes the foreign object within the orbit

Fluorescein Angiography: hypofluoresence in the area of chorioretinal rupture[1]

There is no consensus on the management of chorioretinitis sclopetaria due to the low number of reported cases as well as the variability in injury. A case-by-case approach is indicated in blunt ocular trauma, and treatment teams need to be cognizant of chorioretinitis sclopetaria along with possible comorbidities inculding orbital floor fracture, commotio retinae, retinal detachment, and intraorbital foreign body/ies.

The majority of treatment for sclopetaria tend to follow two paths of management: surgery versus observation. The treatment depends on each individual scenario. If there is concern for globe rupture and/or retinal detachment alongside sclopetaria, surgery is indicated. Immediate surgical intervention may not benefit the final visual recovery, however the sample size for such interventions are currently low.

Patients with sclopetaria are at increased risk of progression or delayed presentation of vitreous hemorrhage and retinal detachment. Retinal detachment is considered less likely due to the fibroglial scarring between the choroid and retina, as well as the typically young patient population with intact vitreous. However, occurrence is possible with severe repercussions to a missed diagnosis.[1][8]

Prognosis of chorioretinitis sclopetaria depends on type of injury, object of injury, location of primary penetration and location of rupture. Most patients experience improvement in final best corrected visual acuity from time of injury, but only 16.4% achieve 20/20 vision.[1][6]