Cerebral venous sinus thrombosis (CVST) is a clot in the venous drainage system of the brain and can present to ophthalmology.

CVST is an uncommon type of stroke. It accounts for 0.5-1% of all strokes and affects approximately 5 per one million people annually. A patient presenting with CVST is more likely to be younger (less than 50 years old) and more likely to be female and young adults when compared to typical ischemic strokes. [1][2] [3][4] but may also be seen in children

The risk of CVST is related to Virchow’s triad (i.e., stasis, changes in blood composition, and changes in the vessel wall). Risk factors for CVST can be separated into acquired and genetic causes. Females are at higher risk for hormone specific risk factors (e.g., oral contraceptives, pregnancy, and hormone replacement therapy). [5]

The main pathology is a thrombosis of cerebral veins, most common in junctions between cerebral veins and larger sinuses. The dural sinuses not only act as venous channels, but also contain arachnoid granulations that allow the cerebrospinal fluid (CSF) to drain from the subarachnoid space into the systemic venous system. A thrombosis to the dural sinuses causes a back-up in venous pressure, and may impair this CSF drainage resulting in increased intracranial pressure (e.g. headache, nausea, vomiting, papilledema, and visual problems). [6]

The cortical venous system is anatomically variable. Clinical findings of a cortical vein thrombosis depend on the size and extent of the thrombus, location, and nature of collateral supply. If unfavorable conditions exist, a CVST may lead to increased venous and capillary pressure and a breakdown in the blood brain barrier with resultant vasogenic edema, cytotoxic edema, and hemorrhage. [7]

The proposed pathogenesis is as follows: Cortical vein occlusion Increased venous and capillary hydrostatic pressure further blood brain barrier (BBB) disruption Vasogenic edema Intracranial pressure continues to increase Venous/ Capillary rupture and hemorrhage and decreased cerebral perfusion with subsequent ischemia and cytotoxic edema. In most instances, both dural sinus and cortical venous thrombosis occurs simultaneously, with isolation of either being rare due to their effects on one another. [8][9]

The pathophysiology behind the visual impairments often seen in CVST include:

In 1825, Ribes MF noted the first case of CVST in a 45 year old man presenting with headache, seizures, delirium and autopsy confirmed superior sagittal and lateral sinus thrombosis . The first post-partum autopsy confirmed CVST was in 1828 by Abercrombie of a 25 year old woman with headache and seizures 2 weeks after an uncomplicated delivery. Currently the largest studies exploring CVST are an Italian multicenter study of 706 patients with CVST, and the International Study on Cerebral Vein and Dural Sinus Thrombosis (ISCVDST) which included 624 patients with CVST. [11]

The clinical presentation of a CVST can be variable and the diagnosis should be suspected in patients with new onset focal neurological deficits, signs of increased ICP, seizures, or mental status changes. A complete ocular exam including dilated fundus examination, visual field examination, and optic nerve photographs are recommended in patients with CVST.

MRI/MRV: MRI T2 weighted imaging with MRV is the most sensitive test for identifying CVST . The appearance on MRI is dependent on the age of the thrombus. In the acute setting (days 1-5), the thrombus is typically hypointense on T2 and isointense on T1 weighte MRI. The subacute thrombosis (days 6-15) is usually strongly hyperintense on both T1 and T2 weighted images. After 3 weeks, the signal becomes irregular and either flow was restored or a persistent thrombus was seen. [15]

CT/CTV: Non-contrast head CT is usually the first test ordered with new onset neurological deficits. This test is not very specific for CVST and is abnormal in only approximately 30% of cases. In the roughly 30% of cases where CT reveals a CVST, an empty delta sign may be seen represented as a dense triangle in the posterior portion of the superior sagittal sinus. In areas where MRI/MRV are not as readily available CTV may be added to CT to aid in the suspected diagnosis. [16] 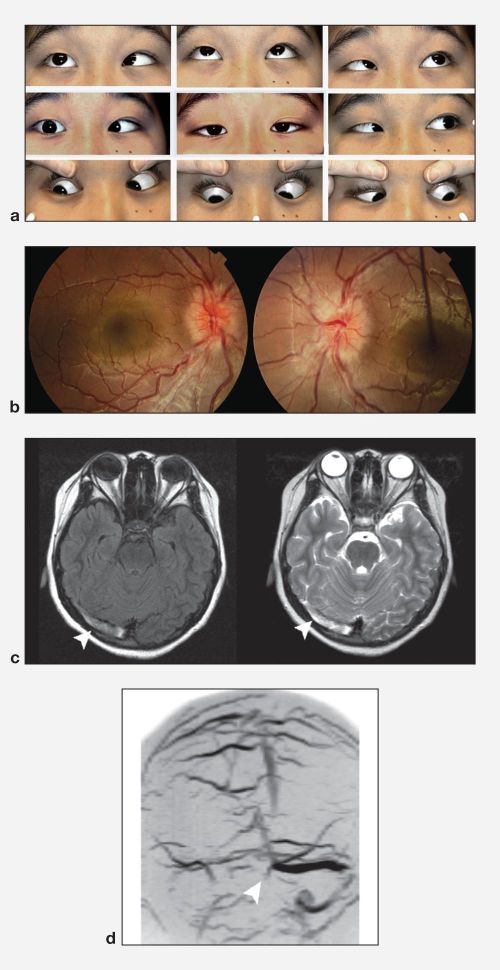 Infectious or inflammatory states is recommended in CVST depending on the case presentation and associated symptoms. There is no laboratory study able to help rule out a CVST in the acute state however. [4]

Due to the varying presentation of CVST, the differential diagnosis list is dependent on the presenting symptom and is quite broad. Listed below are some of the top diagnoses to rule out.

If there are no contraindications , anticoagulation in the acute phase with either body-weight adjusted subcutaneous LMWH or dose- adjusted intravenous heparin is the medical therapy of choice. Concomitant intracranial hemorrhage related to the CVST is not an absolute contraindication for heparin therapy. In uncomplicated cases, LMWH is preferred over IV heparin due to less major bleeding problems. There is no evidence available for duration of anticoagulation after the acute phase. [17][18][11]

In cases of intracranial hypertension with secondary papilledema, progressive headache, or third or sixth nerve palsies, management consists of a collection of strategies to reduce the pressure and preserve vision. The first measure is listed above; anticoagulation to reduce thrombotic occlusion of venous outflow. Other measures resemble the treatment of IIH. Serial lumbar punctures to reduce CSF volume can be considered with the caveat of needing to hold anticoagulation while it is performed. Other alternatives include treatment with acetazolamide to decrease CSF production.[15] Because blindness can be the long-term complication of elevated pressures on the optic nerve, close monitoring of visual acuity and visual fields is important in patients with elevated ICP.

Optic Nerve Sheath Fenestration (ONSF) can be considered in patients with CVST with elevated ICP when medical management has failed and visual function is failing. In patients where intracranial hypertension remains persistent despite adequate medical management and a lumbar drain, a CSF diversion procedure (ventriculoperitoneal or lumboperitoneal shunt) may be considered. [19]

Endovascular thrombolysis and mechanical thrombectomy have not played a prominent role in the treatment of CVST but may be considered in cases of severe neurological deterioration despite use of anticoagulation, venous infarcts causing mass effect, or intracerebral hemorrhage causing treatment resistant intracranial hypertension. [20]

Early Death: Approximately 3-15% of patients die during the acute phase of CVST. Causes of death were mainly secondary to transtentorial herniation due to local mass effect or diffuse edema and multiple parenchymal lesions.

Late Death: Most are related to underlying diseases; especially malignancy.

Long-term outcomes: The overall death a dependency rate is 15%. Complete recovery occurred in 79% of patients.[21]