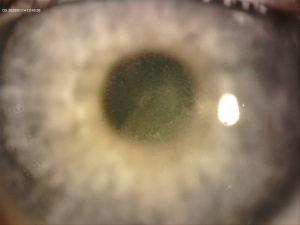 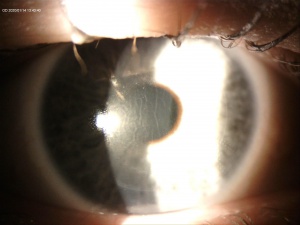 Figure 2: Striae associated with a case of CTK

Central toxic keratopathy (CTK) describes a rare, acute, non-inflammatory complication most associated with excimer laser ablation surgery (e.g., laser assisted in situ keratomileusis (LASIK) or photorefractive keratopathy (PTK) surgery). However, idiopathic cases have been reported[1] and an association with contact lens use has been made[2][3][4]. Potential cases have been associated with selective laser trabeculoplasty[5] and topical anesthetic[6] use as well. Fraenkel and colleagues first described CTK in 1989 as being inflammatory in nature but the condition has subsequently been recognized as a non-inflammatory process.

Although the exact cause of CTK is ambiguous [7][8], several theories abound regarding possible factors contributing to the development of CTK. Among the most prominent suggestions in the literature are photoactivation of povidone-iodine by the excimer laser, laser-induced keratocyte apoptosis of corneal matrix [8], intraoperative exposure to meibomian gland secretions [8], marking pen ink [9], talc from latex surgical gloves [7], or post-surgical debris from the microkeratome blade [7].

Pathophysiologic changes in CTK are incompletely understood; however, some aspects of the disease have been established. One principal aspect of the disease is corneal thinning due to stromal loss. The most well -supported theory to explain the underlying mechanism is an apoptosis of keratinocytes. This mass keratinocyte apoptosis may also be the cause of the observed central opacity[3][10][8][11][12]. Tissue loss is most prominent in the first month, and results in a loss of anterior tangential curvature; while posterior tangential curvature remains relatively unaltered[11]. An alternative theory to the observed thinning proposes that micro edema into the corneal periphery causes mild stretching[13]. Following the thinning, the corneal thickness begins to increase over a matter of weeks to months. This aspect of the disease is less studied, but may be the result of stromal remodeling or epithelial wound healing[10].

A central opacity in the corneal stroma should be evident on exam (Fig. 1), and may be associated with striae (Fig. 2). Inflammation should not be readily apparent. A hyperopic shift and resultant decrease in visual acuity is also a common feature of the disease. OCT imaging may show the opacity as an “inverse dome” that extends from the anterior to posterior stroma with homogenous reflectivity. Confocal microscopy has revealed activated keratinocytes and potential Descemet’s membrane folding[2][7][8][11][14][15].

The characteristic clinical appearance in CTK bears a striking resemblance to a number of inflammatory and infectious conditions including contact lens-induced keratitis [4][16] , infectious keratitis[4], post-photorefractive keratectomy (PRK) haze[9], epithelial ingrowth, diffuse lamellar keratitis (DLK) [7][8], and corneal haze secondary to increased intraocular pressure [9].
Despite its shared features with other disease processes, CTK can be appropriately distinguished from masquerading conditions via a thorough history and an awareness of timing of onset, existing inciting factors, and by the nature of clinical findings that each disease characteristically exhibits.

For example, although both DLK and CTK both lead to a reduction in corneal clarity and a hyperopic shift, the post-surgical opacification seen in DLK tends to be nonlocalized [7] and subepithelial [9] while the post-surgical haze in CTK is centralized and extends anteriorly or posteriorly from the interface. Similarly, unlike infectious or inflammatory processes which exhibit characteristic features, CTK rarely presents with chamber reaction, conjunctival hyperemia, or ciliary flush [7].

Since the centralized stromal haze in CTK spontaneously resolves within 18 months without treatment, close monitoring and regularly-scheduled follow-up remains the primary management strategy in patients with CTK [7][9]. Although corticosteroids were used in the past, the recent discovery that CTK is non-inflammatory in nature coupled with the fact that CTK is unresponsive to steroid therapy has discouraged the use of these medications in the management of CTK[7][9].

Additional medical therapies that may be beneficial include metalloprotease inhibitors (such as doxycycline) and agents that promote corneal wound healing (such as ascorbic acid); whereas agents, such as mitomycin-c, that are known to disrupt these processes may worsen outcomes in patients with CTK[17][18][19][20]. Finally, based on the micro edema hypothesis of corneal flattening, hyperosmotic agents have been tried by some with beneficial effects[13].

As stromal tissue loss is a prominent feature of the disease, surgical management is generally not recommended due to fear of further thinning the cornea. However, some authors have argued for the use of more invasive procedures (e.g., flap lift and irrigation) in the treatment of CTK, indicating that additional stromal loss is not inevitable[21]. No study has been completed to show a definitive benefit to invasive procedures at this time.

Given its rarity and the fact that it shares striking similarities with other infectious and inflammatory processes, CTK is understandably mismanaged and misdiagnosed. CTK typically resolves spontaneously within 18 months with minimal complications or permanent sequelae [7][8]. Most complications, however, that arise in the setting of CTK typically occur as a result of mismanagement with steroids or other similar medications that can exacerbate preexisting refractive or anatomic alterations in this patient population [7].

The prognosis for CTK may be fair to good. In most cases, the condition resolves within 18 months of the inciting event; ; however, hyperopic visual defects may remain8.