Cataracts describe a multi-factorial change to the eye's lens system inducing optical changes, visual degradation and effect on quality of life among other secondary effects. This pathology remains a continued significant burden to the world population even in modern times.[1]

Radial Keratotomy Though the concept of radial keratotomy for altering corneal biomechanics and refractive state has approached near a century since Sato's [2] publication of the described procedure (on the posterior cornea), it wasn't until the latter 20th century when the popularity of the procedure took off being performed on the order of millions worldwide extending into the 1990s as well. As scientific analysis and clinical studies continued to accrue ,[3] the popularity of RK as a primary refractive treatment has since waned with procedures using LASER in different forms (excimer and femtosecond) and lens based treatments taking the forefront in the refractive surgery arena. As the patient population that had received RK aged, treatment of senescent processes, particularly cataract, became a meaningfully challenging venture reinvigorating the need to understand cornea physiology, pathology, wound healing and optics became evident as traditional assessments and methods of treatment had unsatisfactory results.

Prospective Evaluation of Radial Keratotomy (PERK) study: This study was performed in 1982 and inclusion criteria was for myopic patients with a refractive error ranging from -2.00D to -8.75 D. At 10 years the PERK study demonstrated that 43% of post-op patients between 6 months to 10 years developed a hyperopic shift of at least 1.00D. Between 6 months-2 years post-op, patient's averaged a +0.21 D/year hyperopic shift, but this rate decreased to 0.06 D/year by the 2-10 year post-op time frame. The significance of this study demonstrated that a hyperopic shift occurred throughout the duration of the entire 10 years after surgery, which should be accounted for during future surgical planning. A greater hyperopic shift was found in patients with smaller optical zones. Furthermore the PERK study demonstrated a diurnal fluctuation mean myopic shift 0.31 +/- 0.58 D from the morning to evening. 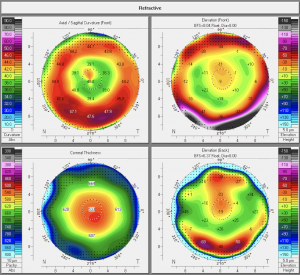 FIGURE 1 - Corneal topography (Pentacam) of a patient after an eight-incision radial keratotomy with appreciable flattening of the central cornea (Courtesy of Michele Lee, MD)

Pre-operative assessment requires additional attention to details at all levels compared to standard cataracts surgery starting all the way in the beginning with the first assessment as described by a standard chief complaint and history of present illness. For eyes with numerous incisions (e.g. 16 cut RK) fluctuation in vision can be a concerning symptom given the known effects of bio-mechanical weakening and secondary refractive effects that can be influenced by factors such as time of day, altitude and sleep cycles.

For cases where vision fluctuates over the course of a 24 hour cycle, timing of when to perform exams and ancillary testing can be challenging. Diurnal fluctuation occurs as a result of hypoxia from lid closure during sleep which creates edema within the incisions and subsequent hyperopic shift upon awakening. This hypoxic edema resolves throughout the day, and by the evening causes on average a myopic shift of 0.31D.[3] Some surgical cases go as far as warranting exams and measurements intentionally at different times of the day and detailed counseling on the refractive shifts and outcomes that will still be present after cataract treatment. Though some case series report limited success of stabilizing biomechanics of corneas with RK [4], such tailored control of wound healing and which areas preferentially tighten may be challenging as certain wounds could gape in comparison to non-incised corneal areas based on the amount of epithelial plugging.

Given that cataracts only further aberrate post RK corneas, deciding the relative role of each on symptoms may be driven by the ability to perform diagnostic rigid contact lens fitting (particularly for new evaluations). For corneas with high number of incisions that result in very flat corneas, reverse geometry lenses (flatter in the center with some peripheral vaulting) may help in determine sources of decreased vision.

Among the Double K formulae True K method has been shown in some studies to have the lowest mean error especially when combined with partial history.[5] When no refractive history is available True K (No History) and unadjusted Haigis were most accurate.

This method is most useful when pre-RK refraction and keratometry readings are available. Of note this method may be confounded by progressive hyperopia after RK and myopic shift from nuclear sclerosis,.

Myopic Correction: This value should ideally be taken a few years after RK stabilizes, however before myopia is induced by cataract formation. This is calculated by taking the difference between the Pre-RK refraction and Post-RK refraction and converting to the power at the corneal plane. The effective corneal power can now be used for the K value in IOL calculations.

Alternatively you can estimate the change by adding 0.25 D for 2D change in power after 4D:

3) Potvin-Hill (Requires use of Oculus Pentacam)

American Society of Cataract and Refractive Surgery: IOL power calculator for eyes with prior RK

-Effective Refractive Power (EffRP) used as the central corneal power by taking all points in the central 3mm and applying this for IOL power calculation.

Recent developments in imaging and devices have allowed for use of intra-operative technologies such as aberrometry and refractometry to adjunct assessment of IOL selection.[6] Otherwise once a surgical plan including type of anesthesia is in place anticipate any other intra-operative such as a 10-0 nylon should be on standby if wounds dehisce (see below). Lower infusion pressure or lower bottle height may aid in avoiding potential complications.

Intra-operative wound dehiscence can occur in very weak wounds under infusion pressure and lead to loss of stability and high fluid utilization. Suturing these may add some partial stability both for the cornea and chamber mechanics. Also control of infusion pressure and minimizing number of times in/out of the eye will be beneficial to minimize compression/decompression events.

Depending on corneal edema and other factors, the post-operative eye may demonstrate an early hyperopic surprise that may improve over the course of 2-3 months. Given this, it is advisable to monitor refractive error in the early post-operative period and avoid potential IOL exchange in the first few months after surgery and much of the refractive surprise can resolve on its own.[8]

Standard risks of any intra-ocular surgery apply to this surgical scenario, however additional risks of refractive surprise and fluctuating vision due to altered corneal physiology and anatomy still apply. General risks related to this must be discussed in the pre-operative counseling (see above).